A coordinated effort must be made to include the PA and Hamas, as well as the Arab world and the international community in a comprehensive rehabilitation plan. 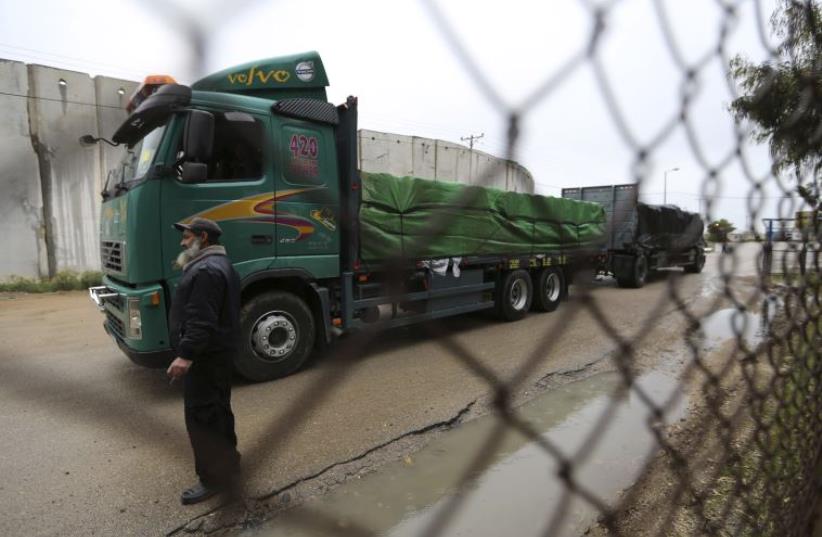 A Palestinian policeman stands guard as a truck loaded with fruits and vegetables waits to cross into the Israeli side of the Kerem Shalom crossing in Rafah
(photo credit: REUTERS)
Advertisement
The present situation is undoubtedly explosive; in Jerusalem, the West Bank, as well as in the Gaza Strip. While the public agenda has focused more specifically on the situation in Jerusalem and various locations in the West Bank, the onset of a military confrontation with Gaza is a distinct possibility.The Israeli government, in coordination with the Arab world and the international community, requires a rehabilitation plan for Gaza which will ensure that Gazans themselves have a reason to prevent a military escalation. Such a rehabilitation plan must deal with the most pressing humanitarian issues still facing Gaza over one year after Operation Protective Edge, while ensuring that Hamas cannot exploit rehabilitation for the sake of rearmament.With this in mind, a small team of researchers under the auspices of the S. Daniel Abraham Center for Strategic Dialogue at Netanya Academic College and in cooperation with the Friedrich Ebert Stiftung Academic Foundation, took upon itself to examine different approaches for preventing another military confrontation, while creating stability and improving living conditions for Israelis living in the South, as well as for the people of Gaza.In seeking a way forward four different strategic approaches were advocated by members of the research team:An unnamed Israeli civil servant suggested that Israel should permit the Hamas government in Gaza to establish a functioning and stable entity of their own, and put a complete end to the siege not only by land, but also by sea. He argued that this would make it possible for Israel to achieve international recognition of the de facto state of “end of occupation” of the Gaza Strip, and make the Hamas government in Gaza fully responsible and accountable for any acts of aggression against Israel.Dr. Ephraim Sneh, former deputy defense minister, prepared a comprehensive economic plan for the Gaza Strip, under the assumption that this plan could only be pursued if Hamas would voluntarily or otherwise demilitarize and hand over governmental control to the Palestinian Authority.A Palestinian contributor placed an emphasis on reaching at first an internal reconciliation between the PLO and Hamas, and defining together an acceptable strategy toward Israel.I argued that the reconstruction in Gaza and the promotion of economic development and stability can only be achieved by a fully coordinated and concerted effort of all interested parties, the international community, Israel, Egypt, the Palestinian Authority, Jordan, Saudi Arabia and Qatar.Practical recommendations were prepared by Celine Touboul, Brig.-Gen. (res.) Dov Sedaqa, Anat Kaufmann and Professor Miriam Hirschfeld. They include immediate action to provide sufficient electricity and water to Gaza; a comprehensive plan for the reconstruction of destroyed neighborhoods, action to create employment opportunities, expanding the capacity of movement of goods at the Kerem Shalom passage, and for people at Erez; providing means to teach and upgrade the professional knowledge of Gaza’s health personnel and more. It has been also suggested that the cease-fire be stabilized via detailed understandings and an oversight and monitoring mechanism.The study indicates that Israel has made significant progress in facilitating the rehabilitation of Gaza. The present situation shows clearly that Israel has lifted the land siege on Gaza, although not the naval blockade. Over 1,500,000 tons of cement have been imported from Israel to Gaza, and about 800 trucks cross at Kerem Shalom daily. The Israeli security authorities have encouraged substantial humanitarian support, as well as investment in Gaza, and the promotion of trade. The present impediments to reconstruction in Gaza do not derive from Israel, but rather result from the continuing enmity between the Palestinian Authority and Hamas, and the reluctance of the international community to invest in Gaza. Thus, a coordinated effort must be made to include the PA and Hamas, as well as the Arab world and the international community in a comprehensive rehabilitation plan which will facilitate economic well-being and security for Palestinians and Israelis.The author, one of the architects of the Oslo Agreement, is the academic director of the S. Daniel Abraham Center for Strategic Dialogue.