Give the police force the resources it needs

Why is the Israel Police the least funded state security service in the country? 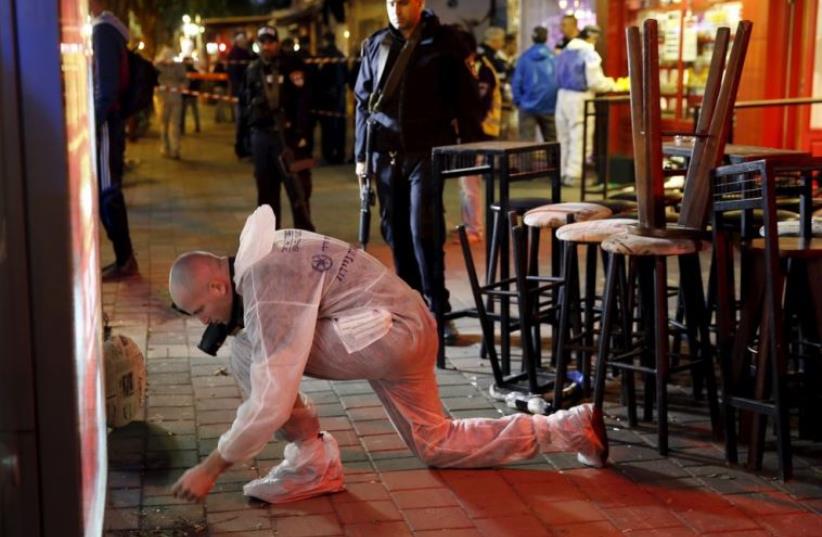 Israeli forensic policemen work at the scene of a shooting incident in Tel Aviv
(photo credit: REUTERS)
Advertisement
Many articles will be filled with aspects of last Friday’s brutal and horrific terrorist attack, but for me perhaps the most startling outcome and problematic part of it is this was Saturday night’s announcement by Internal Security Minister Gilad Erdan. Speaking from the scene, he endorsed the idea that those who have permits to carry firearms should do so and said that he would relax the laws regarding who is eligible to carry them.My problem is not allowing civilians to carry firearms. I myself have a license, own a firearm, and carry it. However the solution is not to encourage civilians to do the job of the security services. Nor should the political debate be whether or not this is a good idea. What Minister Erdan is essentially saying is that he does not have the police manpower to provide security for citizens and so is asking citizens, like me and my friends, to do the job instead.So my question is this: Why is the Israel Police the least funded state security service in the country? Why not drastically increase the number of police officers? What needs to be done to increase the budget and recruit hundreds if not thousands of young officers? A year ago, volunteering with TLV Internationals (www.LoveTelAviv.com), the largest immigrant community nonprofit in the country, we created a new initiative under our ProjecT.A. organization with the Israel Police. The program is dedicated to having young olim train and volunteer with the police in Tel Aviv as a way to contribute to our new home. My fellow olim and I take great pride in rolling up our sleeves and giving to this amazing city that we have chosen to move to, helping to keep our streets safe and to integrate more olim within the fabric of Israeli society. Connecting young olim to our land through social activism, volunteerism and a Zionist pioneering spirit is a crucial part of our organization’s mandate.After one year I am proud to say that we already have close to 30 volunteers who have all gone through specific and professional training, all of whom are now patrolling our streets a couple times a month together in uniform with police officers. As a volunteer myself, I can tell you that the Israel Police has without a doubt some of the most courageous and dedicated people I have ever met. It is an honor to serve with them.But what I have also learned is just how underfunded the police in Israel are. Our previous internal security minister, Yitzhak Aharonovich, failed in his job to maintain the police force at the level it needs to be at. We can only be thankful that he is no longer on the job.According to official government numbers, our police force consists of fewer than 30,000 officers. Put in perspective, that is less than one percent of our entire population.They are charged with keeping our streets safe from all types of violence. Quite frankly this is an impossible task.I am proud to be a volunteer, proud to represent my young immigrant community, proud to be able to assist the police and most importantly proud to have had the opportunity to get to know so many officers over the last year who do so much with so little to keep us all safe.I am not saying that more police could have prevented this specific attack, but the underlying problem is that our police force is undermanned and underfunded. More civilians on the streets carrying firearms is not the solution. The question is this: Will Minister Erdan take up the mandate that he has been given, will he reform, revitalize and fund the Police so that it becomes the kind of internal security force that we all want and deserve? Or will the minister carry on like his predecessor and not opt for the difficult but sorely needed drastic change Israel needs.

The writer was parliamentary and foreign affairs adviser to MK Otniel Schneller, ran the English election campaign for the Likud, and served as an adviser to Tel Aviv mayor Ron Huldai on matters regarding olim and their integration into Israeli society.
Advertisement
Subscribe for our daily newsletter