Government declarations about diversity in media are a deception

Netanyahu and his right-wing government’s desire to restrict the media and to use it for their own needs is transparent. 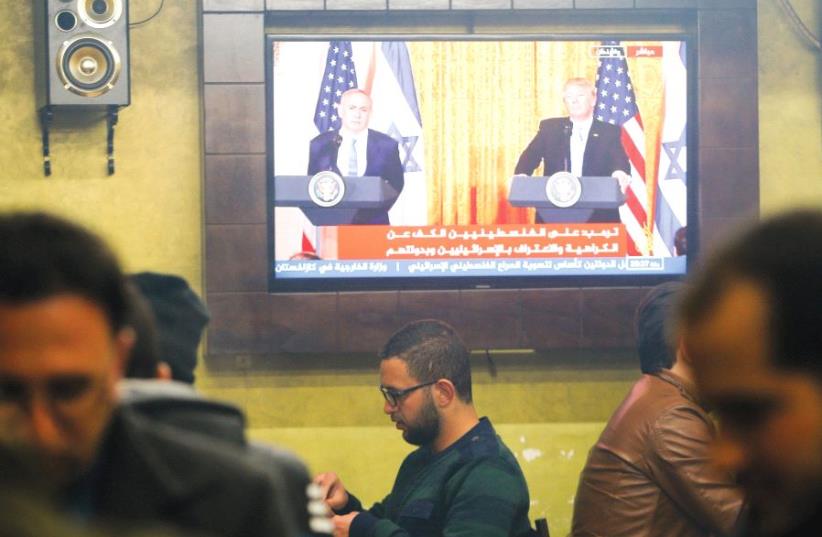 PALESTINIANS GATHER in a coffee ship in Hebron, where a TV screen shows US President Donald Trump and Prime Minister Benjamin Netanyahu participating in a joint press conference in February.
(photo credit: REUTERS)
Advertisement
If we had to choose a single prominent buzzword in Israeli media this past year, it would probably be “diversity.” At every opportunity, politicians, government officials and media directors declared that pluralism and diversity were the impetus for the wave of reforms and changes in Israeli culture and media. However, an examination of the actual changes on the ground shows a very different reality under the surface, one that can’t be disguised even by the seemingly radical appointment of a Druse communications minister.At the beginning of July at a conference for the ultra-Orthodox community, Prime Minister Benjamin Netanyahu announced that he intends to bring about an “open skies” revolution in the media, asserted that “a multiplicity of opinions is one of the foundations of a liberal regime” and that he intends “to create variety and freedom of choice that will serve all citizens.” His emissaries in the Knesset claimed that the establishment of the new public broadcasting company, the splitting of Channel 2 into two separate stations, the new tender for operating the Knesset Channel and the news broadcasting license granted to Channel 20 are an opportunity to open the media to all population groups in Israel.But what is being sold to the public as a liberal process to promote diversity actually conceals a move aimed at restricting media freedom and transforming it into the right arm of the Netanyahu government. Many Israeli media outlets have recently become less critical and outspoken toward the administration – but they still remain far from representing the diverse elements of Israeli society.This trend towards “balancing” left-wing media by adding conservative and right-leaning groups and presenting the move as a way to promote diversity is evident across the board in Israeli media. First was the influential Army Radio Commander Yaron Dekel boasting on Channel 2 and in an op-ed article in Haaretz that he was the one to bring the periphery to Army Radio.But what kind of periphery he is referring to? The many changes he introduced to the broadcast schedule have indeed brought many representatives of the Right and religious Zionism, led by Erel Segal, to desirable broadcasting slots, but representatives of the deeper periphery are found, at best, behind the scenes in minor production positions. The same right-leaning adjustment has also appeared on the political pages of the mass-circulation daily Yediot Aharonot and on overtly conservative media outlets such as TV’s Channel 20 and radio’s Galei Israel.All these organizations claim that they are publicizing a different, “non-Tel Aviv” demographic, but the truth is that the lack of diversity and exclusion of minorities cries out there too. It is difficult to impossible to find significant representation for the different groups that comprise Arab society (Druse, Christians, Muslims, Beduin), or for the Ethiopian community, the ultra-Orthodox community and yes – even Mizrahim and women.It turns out that exclusion is still exclusion, even if it wears a skullcap and supports the settlements.It was particularly disappointing to discover with the airing of the radio and television broadcasts of Kan (the new Public Broadcasting Corporation) that the situation there is no different.Although initial content on Kan’s social media channels gave reason for optimism and presented fresher and more varied voices, the main presenters on TV’s Channel 11 and radio’s Reshet Bet did not bring a message of change. At Kan too, the same “trendy” format of a Right-Left duo was in evidence – a religious versus a secular presenter (with an overwhelmingly male majority), leaving those whose voices really are not heard – mainly Arab citizens – still excluded from public broadcasting. The right and important thing to do is to give them a more significant role in public broadcasting.Netanyahu and his right-wing government’s desire to restrict the media and to use it for their own needs is transparent. But they must not be allowed to wrap it in colors and messages of diversity or promoting a wider range of opinions. This spin must be exposed – it’s a blatant attempt to replace one (left-leaning) elite with another (right-leaning) one, and a desire to weaken critical voices and use the media to serve the needs of the government. The Israeli public deserves a balanced media that will really represent all the groups in society – rather than only talking about it.The author is director of public affairs and the Arab Media Representation Project at Sikkuy – The Association for the Advancement of Civic Equality and teaches communications at the Interdisciplinary Center Herzliya.