Azrieli was an architect who divided his time between Israel and Canada. He was also an international real estate tycoon, and a philanthropist. 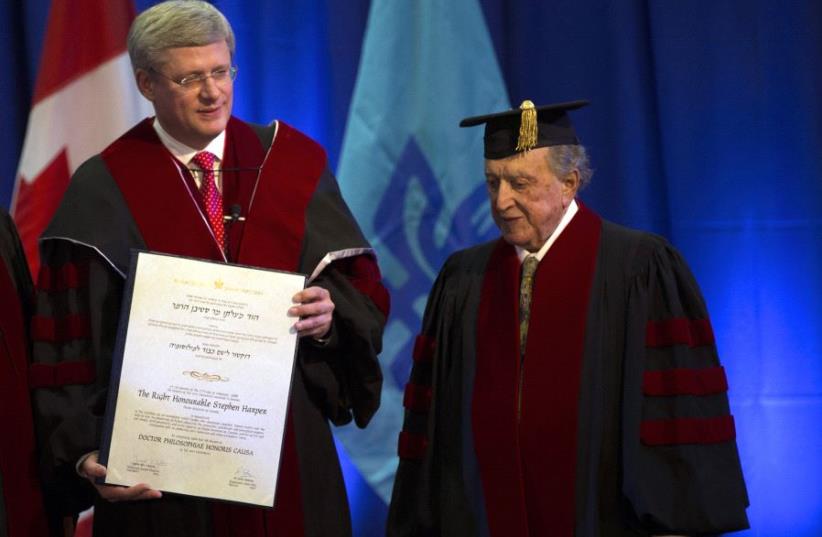 Canada's Prime Minister Stephen Harper stands next to David Azrieli
(photo credit: REUTERS)
Advertisement
■THE LATE David Azrieli was a great supporter of Tel Aviv University and also of the city of Tel Aviv, where the three skyscrapers that comprise the Azrieli shopping mall, offices and banquet facilities have become Tel Aviv landmarks.Azrieli was an architect who divided his time between Israel and Canada. He was also an international real estate tycoon, and a philanthropist. He pioneered shopping malls in Israel and built several in different parts of the country, thereby helping the areas around them to develop.To honor his memory, his three daughters – Naomi, Dana and Sharon – decided to dedicate a new school of architecture in his name at Tel Aviv University. The cornerstone ceremony took place with the participation of Quebec premier Dr. Philippe Couillard. The Azrieli School of Architecture will be situated near the entrance to the TAU campus. The Azrieli Foundation contributed NIS 50 million toward its construction. Completion of the 5,000 sq.m. building is targeted for 2021.■ SOMETIMES WHEN a group of friends tosses around an idea, more for the mental exercise than anything else, it can suddenly take hold and become a successful enterprise.That’s what happened in 2012, when a group of six friends began asking each other whether it was worth introducing a whiskey distillery to Israel. Through crowdfunding they raised $70,000 by the end of 2013, which was barely enough to buy barrels and copper stills. They also brought in master distiller Jim Swan and put the most natural of Israeli brand names on their yet-to-be-produced brew. They called it Milk&Honey, which if nothing else indicated that it would be smooth, slightly sweet and tasty. Some time this month Milk&Honey is to launch its first single-malt whiskey.It will be the first whiskey to be produced and bottled in Israel after being aged in casks for a minimum of three years, thereby complying with the definition of whiskey in Scotland and most countries around the globe. The first barrel was distilled in January 2014 in a warehouse in the northern Sharon region by head distiller Tomer Goren, together with the late Dr. Jim Swan, as part of his role as consultant to the distillery at the time. The distillery is now located in Tel Aviv.■ DEFENSE MINISTER Avigdor Liberman will be the guest speaker (in English) at the Tel Aviv International Salon on Thursday, June 15. His initial remarks will be brief, after which he will interact with the audience in a Q&A session.The event at Hangar 11 at the Port of Tel Aviv is geared strictly to young professionals in the 20s and 30s age group. Entry is strictly by pre-registration. https://MinisterLibermanSalon.eventbrite.com ■ LEGENDARY ISRAELI soccer coach and team manager Avram Grant, who over the years coached Hapoel Petah Tikva, Maccabi Tel Aviv, Hapoel Haifa, Maccabi Haifa and the Israel National Team before moving to England in 2006, is making headlines with his current romance.His wife, actress and television personality Tzufit Grant and their two children followed him to England, but after a couple of years returned to Israel, and the Grants divorced. His current significant other is American singer, songwriter, actress and producer Mariah Carey, who was formerly engaged to Australian billionaire James Packer, through whom Prime Minister Benjamin Netanyahu and his family got to host her at the PM’s residence.