AMIT will celebrate the reunification of Jerusalem by hearing from Naomi Cohen, the wife of the late former chief rabbi of Haifa She’ar Yashuv Cohen 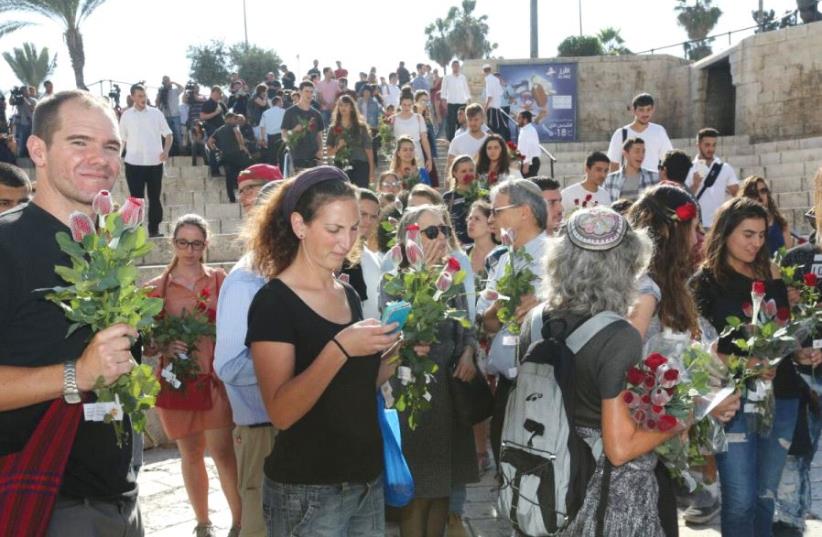 On Jerusalem Day last Wednesday, members of the Tag Meir movement presented flowers to passersby in the Old City’s Muslim Quarter
(photo credit: YOSSI ZAMIR/TAG MEIR)
Advertisement
■WITHIN THE framework of Jerusalem Day, the Jerusalem College of Technology hosted a groundbreaking ceremony for its NIS 400 million Tal Campus, which will be the largest in the world for engineering studies for religious and ultra-Orthodox women. The event was attended by many people from abroad who had come to the World Mizrahi Conference in the capital, plus Jerusalem Mayor Nir Barkat, Minister of Jerusalem Affairs Ze’ev Elkin, MKs Avraham Neguise, Moti Yogev and Yaakov Margi, Jerusalem Foundation president Yohanna Arbib, deputy mayors and members of the Jerusalem City Council Meir Turgeman, Yael Antebi, Ofer Berkowitz, Hagit Moshe, and Moshe Lion, and Jerusalem College of Technology-Lev Academic Center president Prof. Chaim Sukenik, Batei Midrash head Rabbi Yosef Tzvi Rimon, vice president Stuart Hershkovitz, director-general Yossi Zeira, and campus head Eti Stern.The new campus, near Shaare Zedek Medical Center, will include state-of-the-art technology, including digital rooms equipped with the most advanced electronic equipment, computer laboratories, a library, an advanced sports center and a day-care center. The first building to be constructed is the Life and Health Sciences Building, a field in which the college has become a national leader in which more than 750 women are currently studying.“We are changing the map for religious women and creating a revolution,” said Sukenik. “The entry of the religious and ultra-Orthodox public into the workforce is vital to the success of Israel’s economy. Building the campus will serve to advance groups that are considered to be underprivileged in society, such as the haredi and Ethiopian-Israeli sectors, and it will open new opportunities for people who were formerly unable to access academia and the workforce, and will enable us to produce engineers, hi-tech and management personnel who will lead the Israeli hi-tech industry.”The Academic Center was established two years after the 1967 Six Day War, in the euphoric days felt by the people of Israel in general and the religious public in particular. As the State of Israel expanded, the national-religious public and the ultra-Orthodox community wanted to contribute and make a difference and this created the need for this institution.“The fields taught here, both for men and women, are highly in demand and serve to encourage the growth of the entire economy, and especially in Jerusalem, since many of the graduates of this institution choose to stay and live and work in Jerusalem,” Elkin noted.■ON JUNE 5, the 50th anniversary of the Six Day War, the Institute for National Security Studies (INSS) and Yad Yitzhak Ben-Zvi will hold a conference under the title “The War that Changed the Face of Israel and the Middle East.” The day-long conference from 9 a.m. to 5 p.m. at Yad Ben-Zvi (14 Ibn Gvirol Street in Rehavia) will explore political, strategic, and operational perspectives from before the war, and examine the processes Israel has experienced as a result of the war.■THERE IS ALWAYS something exciting about meeting and listening to pioneers. Anyone attending the spring luncheon of AMIT Women’s Chug Ayelet Chapter at the Jerusalem Crown Plaza Hotel on June 6 will have that rare opportunity. Religious education for Jewish women would not be where it is today but for the courage and determination of Rabbanit Malka Bina, who was the founder and first teacher of Matan Women’s Institute for Torah Studies.Since then other facilities have sprung up and emulated the process that she set in motion. Malka Bina, whose list of honors includes the Hadassah Woman of Distinction Prize, an honorary doctorate from Yeshiva University, Emunah’s Woman of the Year, and the Bonei Zion Prize has been chosen as the AMIT honoree for her dedication to the enrichment of Torah learning and Jewish education for women.AMIT will also celebrate the reunification of Jerusalem by hearing from Naomi Cohen, the wife of the late former chief rabbi of Haifa She’ar Yashuv Cohen. Rabbanit Cohen will reminisce about the days leading up to the dramatic capture of the Western Wall and a film depicting that era will also be shown. For further information please contact the AMIT office, (02) 673-8360.