Try finding something to say before its relevance and timeliness are swept away. 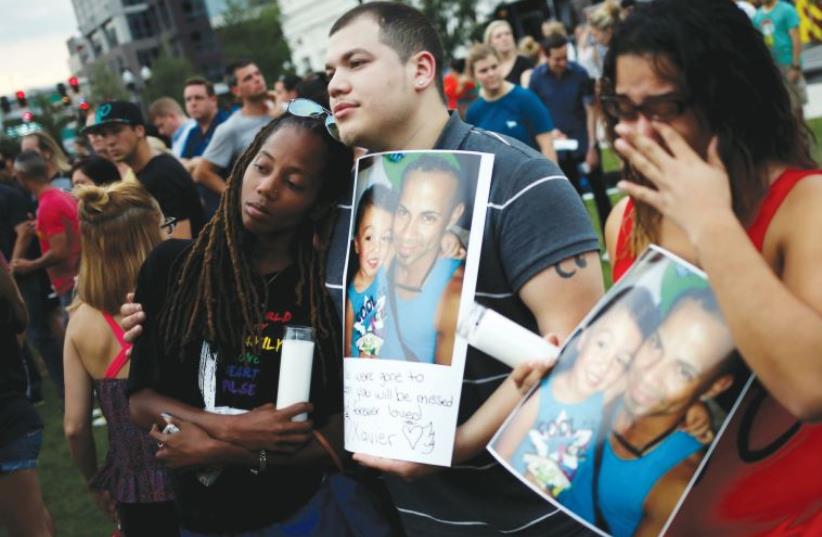 Orlando residents hold a picture of their deceased friend Xavier Emanuel Serrano Rosado during a candlelit vigil in memory of victims of the mass shooting at the Pulse gay nightclub
(photo credit: REUTERS)
Advertisement
Whoever thinks that writing a column is an easy way to make a living, think again.This column is a prime example.At first, I started writing about a hotel I had found in New York City’s Chinatown for a recent family trip. The Mulberry, on the street of the same name just south of the Lower East Side, was quite different from the midtown hotels my family and I usually called home during such trips, and far from many of the city’s prime venues of culture and entertainment. It was a gamble.Indeed, when we arrived, the narrow street was not the most conducive to unloading, but we soon met the nicest, most helpful doorman/bellboy/ reception clerk/manager in the person of Eddie Chan, pretty much a one-man operation who made our stay pleasant and convenient. It was a heimish (albeit Asian) experience that I wanted Post readers to know about.BUT THEN I began watching the outrage mount over the light sentence passed on Brock Turner, an all-American college boy with everything going for him except the ability to refrain from sexually assaulting a young woman too intoxicated to put up a fight – if she was conscious at all.The story attained national prominence when the anger-filled, yet remarkably eloquent statement his victim read aloud at the sentencing went viral.And things got a lot more noisy when the text of a request for leniency that Turner’s father had sent to the judge went the same route, especially the part saying that harsh punishment would be “a steep price to pay for 20 minutes of action....”Put Eddie aside and pick up on Brock.Then, on June 7, Lesley Sachs, executive director of the Women of the Wall, was arrested while carrying a Torah scroll into the women’s section of the Kotel. She did it just as it was becoming clear that a government-sponsored compromise hammered out for a mixed-gender prayer section at the Western Wall was coming apart.What’s more, there were ultra-Orthodox MKs who at the same time were spewing hate and venom not only about egalitarian prayer at the Wall, but about non-Orthodox Judaism in general, particularly in the realms of conversion and ritual baths. It was a story I just couldn’t ignore.So ditch Brock and start writing about the intra-religious divide.Then came the June 8 shooting by two young Palestinians who came to central Tel Aviv in suits and ties, looking for all the world like two more millennials at an upscale eatery before hauling out homemade Carl Gustavs and mowing down 11 people, four of them fatally.Gone were the swarthy, unshaven terrorists of yesteryear; the stage had been taken over by bad people who had learned to look good and fit right in.(Making matters entirely bizarre was the fact that the attacker who got away, now unarmed, was given shelter by an off-duty police officer rushing home among panicking pedestrians to retrieve his gun. A few minutes later, back at the scene, when the cop found the second shooter lying wounded on the sidewalk – in clothing identical to that worn by the trembling young man he had compassionately left with his wife and inlaws – he rushed home, where everyone else was just reaching the conclusion that something was not quite right.) Rounding things out was coverage of the attack by several foreign news outlets that seemed eager to play down the terror angle, and contentious comments by Tel Aviv Mayor Ron Huldai, never one to chew over his words for too long before spitting them out, who blamed the shooting on the occupation, drawing no small amount of rightwing ire.A major story with plenty to reflect on, so bye-bye religious pluralism, hello Sarona Market.But then came Orlando….SETTLING ON a subject for a column is quite similar to the essence of the news business. Things are fluid.Choices have to be made. There are limitations. At a given moment, when a newspaper has to be put to bed, a switch thrown in a broadcast booth or a publish button clicked in someone’s cubicle, there is only so much column space, air time or browser framing available.A news editor, starting off her shift with a cup of coffee and a list of items that are already news or look like they might develop into news, is faced with such decisions every day. Generally, there is enough space or time to send x-number of reporters into the field to gather the requisite information and then write cogent pieces quickly enough for them to be edited and thrown onto newsprint, out into the ether or down the bandwidth.But nearing deadline, especially in print and broadcast journalism, stories might change and need to be updated, or fresh news might break, requiring reporters, editors and producers to be scrambled anew to make sense of what’s going on, and do it in time to get it all down in coherent form under a ticking clock.It can drive news editors and a lot of staffers to distraction, frazzling nerves and filling hallways with sprinting troops, shouted orders and curses of aggravation. News is a business that can burn one out in a matter of months or, in the case of this column, over the course of just a few days.So, Eddie Chan, ready me a room amid the hustle, bustle and workaday sounds of Chinatown. Relatively speaking, it will be an oasis of quietude and sanity, a place to collect my thoughts and write a proper column.Until, that is, the next wave of breaking news rolls us over, dousing an idea that until just moments before had been entirely newsworthy, relevant and timely.