Authentic Jewish leadership comes from dedication, humility and a willingness to dirty your hands; Not just from visibility or money. 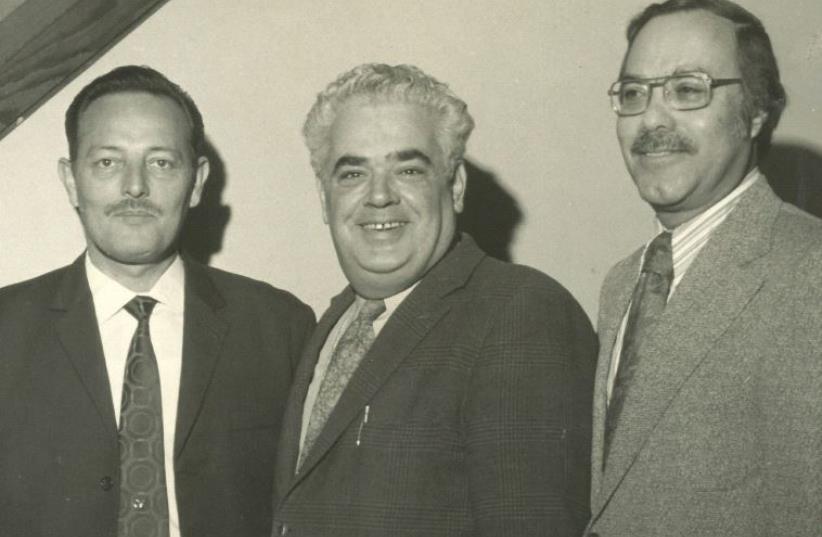 The writer's father (right) stands close – but not quite next to – then-IAF commander Benny Peled (left) in West Hartford, Connecticut, on April 15, 1973
(photo credit: Courtesy)
Advertisement
The Jerusalem Post recently published a supplement for Rosh Hashana, 50 Most Influential Jews. (There were actually 64 people listed, but that’s beside the point.) Of the top three, two were philanthropists: Haim Saban (No. 1) and Sheldon Adelson (No. 3). Clearly, the point was that money means influence. This is not to demean anyone who is willing to part with money for a good cause – although sometimes “good cause” can be defined only in very narrow terms. But this, too, is beside the point, because all too often, we refer to financially generous Jews as “Jewish leaders.”JUST WHAT is a Jewish leader? It seems there are three types.The first generally comes up through the ranks, starting in the trenches and progressing thanks to hard work and, quite often, personal example. Such people can be community professionals – rabbis, teachers and Jewish Federation directors, just to name a few – or merely top volunteers. It’s mostly due to the fact that they shed sweat, know how things work and can rally others.The second type becomes a Jewish leader through visibility. These people usually have a high profile due to their line of work and are seen or read about in the news in a positive way. Their presence on a Jewish community’s masthead brings prestige. Usually, they give some of their money, and often even some of their time. But many might better be called simply “trophy Jews.”Members of the third group become Jewish leaders solely by virtue of their money. They might have worked hard to earn it, but usually, their status in the community derives from the fact that they part with it to the community’s benefit.They basically purchase their position of leadership, perhaps by becoming a name on a building or an important institution or program, or by underwriting an organization that lets them have anywhere from some to a lot of say in how it’s run and what it does.Two noteworthy examples of the last group are Saban and Adelson.Saban, born in Egypt and now a resident of Beverly Hills by way of Israel and France, gave us the Power Rangers, a cadre of cartoon super heroes who kept our kids glued to the TV screen long enough to eat lunch on folding lap-tables before moving on to playdates or the latest computer game. It wasn’t Gone with the Wind or even Star Trek, but it served its purpose. He eventually built up a media empire and today is worth about $3 billion.Adelson, born and raised in Boston and now a resident of Las Vegas, made his billions in the casino business. It’s not as honorable a fortune as one that might be attained by achieving world peace or developing a cure for cancer, but someone’s got to give gamblers and little old ladies with bags of quarters a refuge from nicotine-stained bookies and large men named Vito who issue friendly reminders about unpaid debts.His net worth bobs (he moves up and down the Forbes list like a buoy in choppy seas), but it’s safe to say he’s good for perhaps 10 times as much as Saban.Many among the first group of Jewish leaders spend a lot of time trying to raise money from the last group. My father was one of them.A volunteer chair of the local Israel Emergency Fund, my curtain-salesman dad would bust his ass during the little time he had free from his day job (and even take time away from work to bust his ass a little more) in order to cajole people into making a donation. Interestingly, each year, he would give a far larger proportion of his own wealth – if you could call it that – than did a lot of the big shots with whom he’d spend hours literally begging for a few miserable bucks.Perhaps the saddest part is that when Israeli VIPs came to town, the moneyed denizens of the community would usually push my dad out of the viewfinder for the congratulatory photos. (One exception is when air force commander Benny Peled showed up.) Dad never let it bother him, though. He wasn’t in it for himself.When he died of cancer at 56, just before the start of another fund-raising season in late 1974, no buildings or programs were named for him, although the Jewish Federation kindly allowed his successors to dedicate the coming campaign to his memory.ALL OF THE people in the three categories of Jewish leadership are important cogs in the continuity of a thriving Jewish community. But it has to be said that the real Jewish leader is one who gives of himor herself. Certainly, it can mean giving money, and certainly, it can mean lending stature to enhance the nobility of the cause. But mostly, it’s someone who does the scut work, performing it with extreme dedication, sweat and humility, and then encourages others to do the same.My father was a Jewish leader no less than Haim Saban or Sheldon Adelson – and probably more so. He gave of himself when he could little afford to. He identified a cause that was far more important than status or applause, and then went out and did what he did for absolutely nothing in return save for an annual certificate of appreciation.Now, with this column, he has something named after him. You more than earned it, Dad.