Here and There: The dark side of Sweden

Stockholm might be claiming to fight anti-Semitism, but anti-Zionism is all the rage. 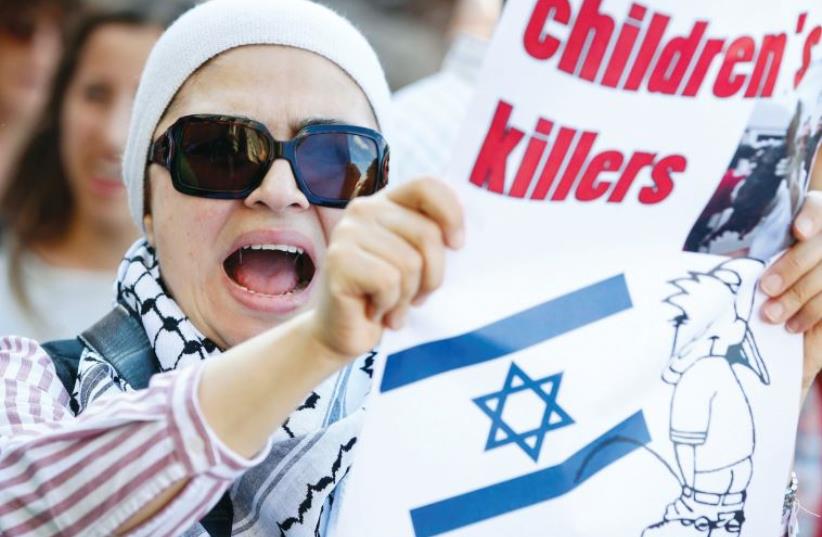 A PROTESTER holds up a placard during a demonstration in Stockholm against Israel, in July 2014.
(photo credit: REUTERS)
Advertisement
I was surprised to read recently in The Jerusalem Post that Sweden is looking to lead the fight against anti-Semitism in Europe. Swedish ambassador to Israel Carl Magnus Nesser said Prime Minister Stefan Löfven “really wants to take a lead in fighting anti-Semitism worldwide.”The officials proclaimed they would be focusing on combating physical attacks against Jews as well as addressing the complex situation of online anti-Semitism.There was no mention, however, of any connection between anti-Semitism and anti-Zionism. This was surprising, as Sweden has become Israel’s most vociferous European opponent.Approximately a million of Sweden’s nine million residents are Muslim, while some 20,000 are Jewish. The number of Syrians who received Swedish asylum in 2014 is also 20,000; that same year the Swedish government became the first European country to recognize Palestine.The Church of Sweden supports the Kairos Palestine document, which calls for boycott, divestment and sanctions against Israel, and denies Jewish historical connections to Israel. Radical material published in Ramallah is distributed freely.Back in January, Susanne Sznajderman Rytz, president of WIZO Sweden, was interviewed in the Post. At the time, Sznajderman Rytz recounted an exchange she had with Swedish Foreign Minister Margot Wallström, who has consistently made anti-Israel statements. Following the November 2015 terrorist attacks in Paris, Wallström tied terrorism to the Israeli-Palestinian conflict. When Sznajderman Rytz confronted the minister on the link her response was: “Well, the Jews are campaigning against me.”Sznajderman Rytz was presented recently with the Swedish Culture Ministry’s “Minority Language Award” for her commitment to strengthening the Yiddish language, which has now become one of the recognized national minority languages.The official line seems to be: It’s OK to be Jewish, but it is most certainly not OK to be a Zionist. There is envy in witnessing how, in New York, American Jewry comes out in the streets celebrating Israel Day, but when Swedish Jewry holds pro-Israel demonstrations they are met with rioting. Members of the Swedish Parliament attend anti-Israel rallies where the Israeli flag is set on fire while the flags of Hamas and Hezbollah are proudly waved.Sznajderman Rytz was on a visit to Israel last week when I asked her how she, a Zionist leader, saw the current situation.Sweden, she explained, is a country that has taken in more immigrants per capita than any other country in Europe.Amongst these immigrants are Muslim warriors – many illegal, who find their way via Denmark, thereby eliminating the need for immigration papers. Sznajderman Rytz’s home is the small city of Borås with a population of 120,000 embracing a Jewish community numbering 120. Amongst the population she believes there are some 100 jihadists.Malmö, Sweden’s third largest city, immediately springs to mind when talking about “no-go areas” where not only Jews but any non-Muslim is afraid to enter. Malmö has a population of 318,107, with 20% being Muslim. However, there is a central section of Malmö, named Rosengård, whose population of 23,000 is 90% Muslim.Back in 2003 I was invited to Malmö to address a WIZO Sweden conference.Even then I was told there were areas that Jews must avoid. At that time every fifth boy born in the city was named Muhammad.The Jewish population of Malmö numbers around 700, with many having already left the city. The Chabad rabbi, Shneur Kesselman, is to be admired, determined to stay put in spite of having experienced physical hate attacks against him and his synagogue.Jewish ritual practices such as brit mila and shehita are restricted by law, which presents even more challenges for the Jewish community throughout Sweden.How is the community reacting to the current anti-Zionist situation? Sznajderman Rytz believes there are positive signs, especially amongst its younger section that is prepared to openly support Israel.It is they who are active participants in Israeli embassy briefing meetings. Stockholm recently elected Aron Verstandig as head of the Council of Swedish Jewish Communities , a younger leader who has the courage to stand up and be counted as a Jew and a Zionist. Conversely, however, the older establishment leaders, especially in the smaller communities, prefer to keep their heads down.Back to the beginning, where it is in order to talk about combating anti-Semitism while ignoring the consistent selection of and focus on the one Jewish state for bashing purposes. This breeds anti-Semitism and is its modern face.Today there are those in numerous countries utilizing BDS in an effort to isolate and denigrate Israel with a devastating effect on campuses worldwide.How else could one describe the increasing number of campuses hosting Israel Apartheid Week and its impact on all students, including our own Jewish students? Those engaged in BDS would claim not to be anti-Semitic, yet endeavor to present the one Jewish state (home to the largest number of Jews in the world) as a state to boycott has to be recognized for what it is – blatant anti-Semitism.Sadly, Sweden is not alone.  The writer is public relations chair of ESRA, which promotes integration into Israeli society. She is also active in public affairs.