Here and there: The price of freedom 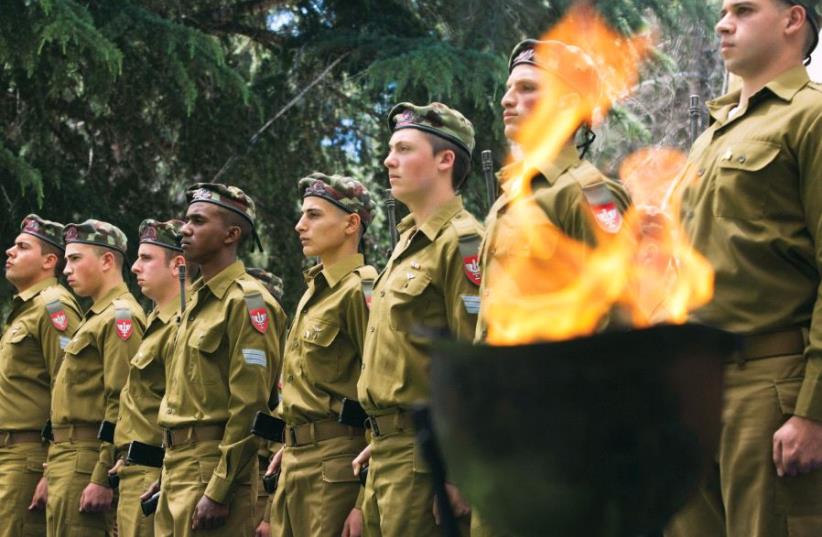 Soldiers attend the Remembrance Day ceremony at Mount Herzl military cemetery in Jerusalem
(photo credit: REUTERS)
Advertisement
My late mother-in-law once said, “You never overcome the loss of a child because it is the wrong way around.”My husband lost his only sibling when she was 25 years old. She died of tubercular meningitis – although her mother was convinced that her illness began when the family left Germany in March 1939, six months prior to World War II.They left a familiar world, but it was a price worth paying to escape Nazi Germany and the incomprehensible barbarism of Hitler’s “Final Solution” for the Jews in Germany and other European countries under Nazi occupation.In common with many refugees, the Kattens arrived in Britain with little more than the clothes they were wearing plus a few shillings.This week we commemorated Remembrance Day for the Fallen of Israel’s Wars, the day when we remember those who gave their lives while fighting to ensure the continued existence of the one place that is a haven for Jews. Many of the 23,310 fallen were young defenders of this fledgling country.A few years ago, I visited Israel’s National Military Cemetery on Mount Herzl on this sad day; this experience has never left me. The graves of the fallen are arranged in chronological order of the wars Israel has fought in its short existence. As I passed each grave, I was struck by the age of many – 18, 19, 20.Added to the trauma was the sight of parents saying kaddish at the graves of their children. For sure, it was the wrong way around.The experience brought back memories of my youth when, as a member of Bnei Akiva attending the Shabbat afternoon activity, we began each meeting by standing for a minute’s silence to remember those who were giving their lives in the War of Independence; a war that claimed 6,000 dead – 1% of the total Jewish population at the time and the highest death toll of any war fought by Israel. Our madrichim were 18 years old and among the fallen were their friends.How does one convey the different lives led by an 18-year-old here and an 18-year-old in the Diaspora? Surely this has to be the starting point of understanding one another. An 18-year-old here is expected to enter the Israel Defense Forces and, after a preliminary introduction is taken to a place of historic significance – possibly the Kotel or Masada for the swearing-in ceremony.Collectively the new recruits recite the oath of allegiance: “….To accept, without condition and without reserve the burden of discipline of the Israel Defense Forces and to obey all the commands and orders given by authorized commanders, to devote all my strength and even sacrifice my life for the defense of the homeland and the freedom of Israel.”Following this, each soldier is given a Bible and a gun and individually swears his/her commitment to the state.Lt. Hadar Goldin, aged 23, was killed in action in Gaza during a United Nations’ brokered cease-fire in the midst of the 2014 Operation Protective Edge.His parents, Leah and Simha Goldin, have consistently campaigned to bring home his body (held by Hamas) for burial.The Goldins visited the UN in a February meeting with UN Assistant Secretary General Edmond Mulet and Israel’s Ambassador to the UN Danny Danon. In March they made a second UN visit to meet with US Ambassador to the UN Nikki Haley. They lost their beloved son, yet cannot visit his grave because Hamas refuses to release his remains.On April 24, the Goldins attended the March of the Living on Holocaust Remembrance Day at Auschwitz where they read a letter written by their son during his visit to Poland as a high school pupil.“I am sitting in a freight car in Poland,” Hadar wrote. “I don’t know how many children who were like me, how many people similar to me and different from me passed through here. They were all Jews. They were torn from their homes, their families, their parents and children and did not know where they were being sent, but I want to tell you because of you (my parents) I know where I am going. I am going to the State of Israel. My country… and I understand what my country gives me but mainly – that I need to give of myself to the country… to represent and defend my country…” He did, paying the ultimate price.How different is the life of an 18-yearold in the Diaspora, where frequently the prime concern is likely to be something like whether the final school grades will enable entry to a chosen university.Over the years, on shlihut to numerous countries my challenge has been to bring home to the varied groups I addressed (whether Jewish or non-Jewish, adults or students) the significance of Israel to the Jewish people. In this context I would emphasize the difference between an 18-year-old Israeli compared to his counterpart in the Diaspora.Today the challenge is somewhat greater than a few years ago. A gap has developed between Israel and the Diaspora based on generation. I grew up in a family where my father (who came from Poland) sang songs to me – both in Yiddish and English – that conveyed a special meaning of what Israel represents to the Jewish People. One song epitomizes the faith and courage of the early pioneers who came to deserts and swamp-filled empty places and began the process of building our beautiful country: With your packs upon your shoulders,
Oh pioneers, pioneers prepare.
Come and let us all march eastwards
Out of exile everywhere.
Though the road be rough and winding,
Who’s afraid of toil and pain?
One breath of life in Zion
Gives us all our strength again.

Sadly, my father never made it to Israel – not even for a visit – but if he is looking down, he will know how privileged his daughter feels to be of this generation blessed to understand what it is (in the words of “Hatikva”) to be a free people in our land, in the land of Zion and Jerusalem.

■ The writer, active in public affairs, is public relations chair of ESRA, which promotes integration into Israeli society.
Advertisement
Subscribe for our daily newsletter