Our leaders should be focusing on ways to reduce conflict and incitement and to assuage fears on both sides of imminent peril. Unfortunately, Netanyahu’s baseless allegations did the opposite. 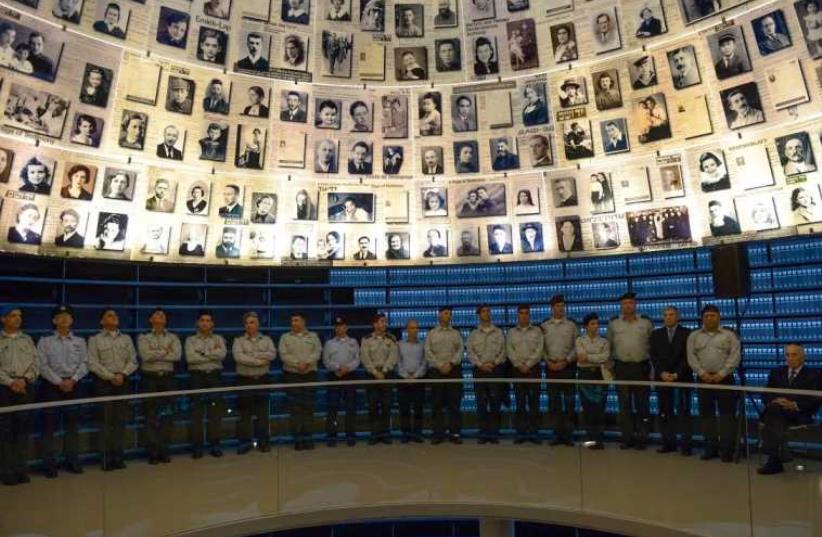 IDF General Staff holds meeting at Yad Vashem ahead of Holocaust Memorial Day, April 13, 2015
(photo credit: IDF SPOKESMAN’S UNIT)
Advertisement
Many aspects of the Holocaust are hotly debated among historians to this day. These disputes often have implications regarding how one interprets modern-day genocides, such as the one that took place in Rwanda in 1994, or regarding how to interpret threats of future genocides, such as Ayatollah Ali Khamenei’s repeated declarations that Israel must be “wiped off the map.”Scholars of the Holocaust still argue, for instance, about how and when Hitler and the Nazi regime began implementing the Final Solution. The position they take often says something about how they view more recent events, as The New Yorker’s Adam Gopnick pointed out in a review of Black Earth: The Holocaust as History and Warning, Yale historian Timothy Snyder’s new book.Some historians believe that the mass extermination of the Jews was already implicit in the orders given by Hitler for the June 1941 invasion of the Soviet Union. Those who do, view the extermination of European Jewry as part of a long-standing plan of Hitler’s. They are also likely to hold the position that evil political leaders, such as Khamenei, mean what they say when they make threats.In contrast, some historians believe that the Final Solution was arrived at in December 1941 as a panicked and improvised reaction to the German rout before Moscow and the Red Army’s counterattack. These historians would argue that the worst things happen when bad people get cornered by their own bad behavior; these historians put less emphasis on atavistic tribalism.There are theories, however, that are outside the pale of Holocaust scholarship. For instance, no credible historian holds the view that Jerusalem Mufti Amin al-Husseini gave Hitler the idea to exterminate the Jews, as Prime Minister Benjamin Netanyahu claimed before the 37th Zionist Congress in Jerusalem on Tuesday.Netanyahu’s comments, which he has only partially retracted, are unfortunate for a number of reasons. First, his distortions of history have drawn attention away from one of the main factors contributing to the present tension between Israelis and Palestinians: the lies, incitement and baseless accusations – particularly regarding Israel’s intentions on the Temple Mount – articulated repeatedly and publicly by Palestinian Authority President Mahmoud Abbas and other high-ranking officials in the PA.Second, Netanyahu’s false allegations regarding incidents that happened so long ago give the impression that Israel’s leadership is dredging up distant history to complicate and escalate tensions. Better to focus on present Israeli grievances that can be addressed and, perhaps, solved. It is much more pertinent to ask, as Netanyahu has, why the PA continues to glorify the mufti despite his well-documented admiration for the Nazis.Third, focusing so much on the mufti’s role during the Holocaust comes across as a defensive strategy sometimes employed by Israelis to counter Palestinian claims that they are being asked to pick up the bill for the crime of European Christians. If it can be proved that Palestinians, or at least Palestinian political leadership, were complicit in the Nazi plan to exterminate European Jewry – so the argument goes – then it is only fair that Palestinians be asked to pay for their actions during World War II.But Jews did not come to the Land of Israel to punish Palestinians, they came because this is their homeland, it is the place to which they have been yearning to return for nearly two millennia.Finally, allegations such as the one made by Netanyahu only obscure the actual role that the mufti played in the Holocaust. It is a matter of historical record that he recruited Muslim troops to fight alongside the Nazis and that he lobbied the Germans to prevent prisoner exchanges or other deals that would have saved thousands of Jewish refugees, including children.The Holocaust teaches us to be wary of leaders who incite to violence and repeatedly threaten to exterminate another people.But it also teaches us that in periods of fear and panic, ordinary people can be driven to perform extraordinary atrocities by offering themselves the rationale of the terrified: We can’t protect what really matters if we don’t do things that we wish we didn’t have to.Our leaders should be focusing on ways to reduce conflict and incitement and to assuage fears on both sides of imminent peril. Unfortunately, Netanyahu’s baseless allegations did the opposite.