Each month, the Israel Democracy Institute and Tel Aviv University survey Israelis about their perspectives on the peace process and other related, pressing issues and policies. 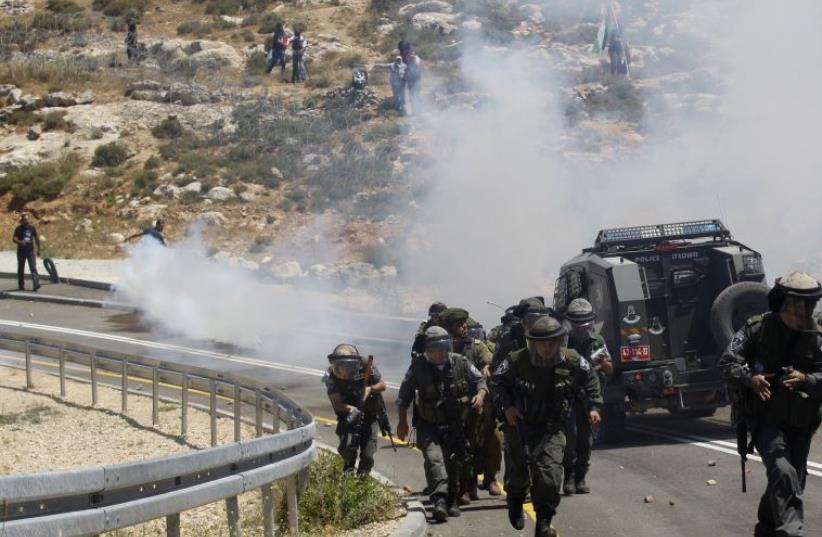 Israeli soldiers run during clashes with Palestinian protesters at a protest marking the 66th anniversary of Nakba, in the West Bank village of El Walaja near Bethlehem May 15, 2014
(photo credit: REUTERS)
Advertisement
When it comes to the political situation, the majority of the Israeli Jewish population is in a conceptual fog. While most individuals who identify with the far left and far right have not drastically altered their worldviews in the past decade, members of the center, center- left and center-right are hovering on ever-shifting ground.Each month, the Israel Democracy Institute and Tel Aviv University survey Israelis about their perspectives on the peace process and other related, pressing issues and policies. The Peace Index has shown us that on the one hand, the Israeli center and center-left has become growingly frustrated and disillusioned with the option of peace as it was perceived in the early ‘90s. On the other hand, the center and center-right have come to acknowledge that there must be a solution and that this solution could mean some type of splitting of the land, most probably a two-state solution.The result is a blurring of the lines between these various political camps – the center- left, center and center-right – which accounts for the majority of Israeli Jews.And, the individuals who ascribe to these labels appear to live in a state of contradiction because where they stand on issues (what they want) contradicts with reality (what is needed).This state of perplexity becomes most glaring when you look at the gap between people’s avid support for the two-state solution and their strong disbelief in the feasibility of such a solution. Of course, if you don’t support the two-state solution and you do not believe the two-state solution is feasible then there is no cognitive dissonance. But if you are in favor of a two-state solution yet maintain such a solution would be impossible to carry through, then you are stuck.According to the most recent Peace Index, roughly 52 percent of the Israeli Jewish public is in support of the two-state solution, which is a small but consistent majority.Yet, only around 11% of Israeli Jews believe the two-state solution is likely to become a reality/be achieved in the foreseeable future.If one unpacks who constitutes that 52%, this gap becomes even more confusing. If one argues that around 15% of those 52% position themselves on the left (as per other survey questions on voting patterns), then we are left with another 37% who must be members of the center/center-left/center- right.How do you believe in something when you don’t believe in its feasibility? The results of the January Peace Index also showed a contradiction between the prevalent Israeli Jewish public desire to go on with the peace talks (67% of Jewish Israelis support a meeting between our prime minister and Palestinian President Mahmoud Abbas, according to the Peace Index), and the widespread lack of trust in the Palestinian leader (72% of Israelis do not trust Abbas). There are many indications of deep mistrust of the Palestinian side that appear to have become a consistent feature of Israeli public opinion in recent years.There is an inherent contradiction here, but somehow it is an understandable one.Israelis (and apparently Palestinians) need the negotiation process to continue in order to maintain some hope for a better future. It is like a married couple – if they are quarreling, they are talking to one another and the marriage can perhaps be saved. When the talking stops, it’s over.However, there are times that surface incongruities revealed by our surveys are not so when examined closer. For example, the large support for territorial separation from the Palestinians appears to be going against many Israelis’ deep-held belief that the land of Israel is the patrimony of the Jews. But this is not necessarily a contradiction; there is a difference between spiritual attachment and political sovereignty. Many Israeli Jews would tell you they believe the land is Jewish land, but that they understand they might have to sacrifice some of their sovereignty over it in order to achieve some kind of peace.Will we have clarity soon? The answer is no, not in the foreseeable future. We will likely be stuck in this political fog for at least another decade, barring any serious shifts.And the truth is that Israel and Israeli Jews don’t pay an unbearable price for not making up our minds. As such, so long as we are not confronting any real decisions – questions remain theoretical – then Israelis will not feel obligated to look for consistency (or the practical conclusions that could be based on it).