How immediate is the threat posed by Islamic State to Israel?

"The vicious Palestinian Authority and Hamas propaganda of recent weeks, using the religious element of the supposed threat to al-Aksa mosque, has also prepared the ground for such an event." 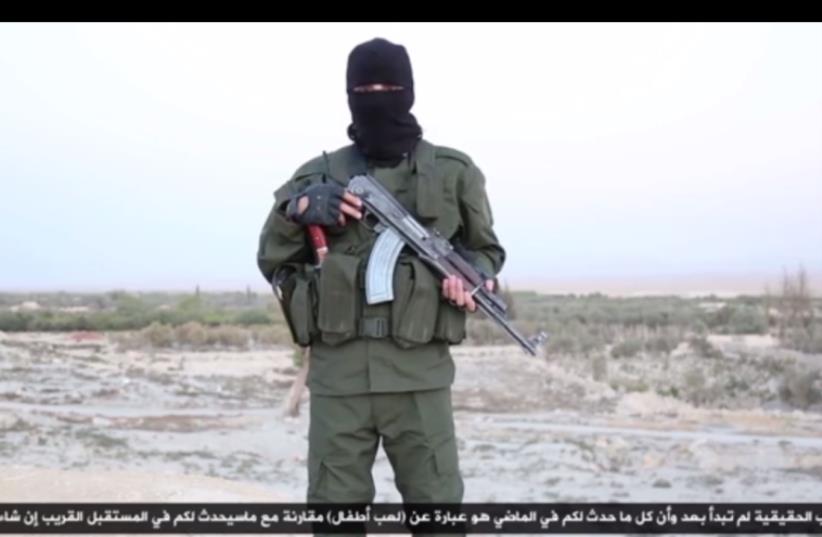 ISIS militant threatening Israel in Hebrew
(photo credit: YOUTUBE SCREENSHOT)
Advertisement
Until lately, the Islamic State of Iraq and al-Sham (ISIS, ISIL or IS) didn’t show much interest in the Palestinian issue.The current wave of Palestinian terrorism has inspired ISIS operatives and media in Iraq, Syria and other countries to disseminate through Twitter and YouTube strong anti-Semitic themes and encourage the Palestinians to kill Jews. On August 25, 2015, IS launched a new media platform called the Al-Masra Institution, which focuses on the Palestinian issue.The Palestinians are the campaign’s main target, but its messages are intended also for audiences in the Middle East and in Muslim communities around the globe.The group has no recognized presence in the West Bank or Gaza Strip. Only a few small groups of salafists/ jihadists in Gaza are inspired by the group’s extremist ideology, seeing Hamas rulers as too soft. Hamas authorities take care not let these groups stage serious attacks against Israel lest it provoke strong retribution against Hamas itself.Some 40 Arab citizens of Israel have traveled to Syria and Iraq to fight with the jihadists. These are quite insignificant numbers if we consider that some 1,200 have come from France, 800 from the UK and thousands from Tunisia, Morocco or Saudi Arabia.On October 24, IS posted its first-ever video in Hebrew: “Not a Single Jew Will Remain in Jerusalem.”The video seems part of the attempt to bandwagon the Palestinian wave of terrorism.However, the threat proffered in the video to attack Jews and Israelis worldwide should be taken seriously, not because IS will send operatives to Europe or beyond but because its propaganda can influence individuals to stage such attacks on their own. The vicious Palestinian Authority and Hamas propaganda of recent weeks, using the religious element of the supposed threat to al-Aksa mosque, has also prepared the ground for such an event.The attack at the Jewish Museum in Brussels on May 24, 2014, where Mehdi Nemmouche, a 29-year-old French national of Algerian origin, shot and killed four Jews, is such an example. Nemmouche spent over a year in Syria and had links with radical Islamists.Another example is the January 9, 2015, siege at a kosher supermarket in Paris, in the wake of the Charlie Hebdo shootings two days earlier, in which a French citizen of Malian origin, Amedy Coulibaly, who had pledged allegiance to IS, murdered four Jewish hostages.The police ended the siege by storming the store and killing Coulibaly.The same strategy was followed by al-Qaida at its time. Osama bin-Laden was criticized for not paying much attention to the Palestinians’ plight, but for him this was a low priority. Only after its demise in Afghanistan and against the background of the success of second intifada did al-Qaida terrorists attack the historical Djerba synagogue in Tunisia and an Israeli-owned hotel in Mombasa, Kenya (and fail to down an Israeli plane in the same Kenyan operation).It should be remembered that Abu Musab al-Zarqawi, the leader of al-Qaida in Iraq (AQI) from 2004 to 2006 and the forefather of today’s IS proclaimed himself emir of al-Sham (the Levant) and included Palestine under his “jurisdiction.”Against this backdrop, nine Katyusha rockets were fired from Lebanon into the Western Galilee on the night of December 27, 2005. Al-Qaida’s Committee in Mesopotamia (AQI) claimed responsibility. On August 19, 2005, an al-Qaida group calling itself the Abdallah Azzam Battalions fired three rockets into Israel from Aqaba, Jordan. One of the rockets landed near Eilat’s airport, while another narrowly missed an American ship in the Aqaba harbor and another hit a group of Jordanian soldiers. This attack was also attributed to Zarqawi’s AQI.ISIS is under combined but not coordinated attacks by the US coalition, the Russian air force stationed in Syria, the Kurds in northern Syria, Turkish bombings and the Baghdad army supported by Shi’ite militias and Iranian forces. For the moment it has no force or will to challenge Israel directly.

The author is a Senior Research Scholar at the International Institute for Counter-Terrorism (ICT) and The Institute for Policy and Strategy (IPS) at The Interdisciplinary Center (IDC).
Advertisement
Subscribe for our daily newsletter