How to win a modern war

Israel must form a strategy at the state level (not just the military level) based on an understanding of the enemy structure, strengths and weaknesses. 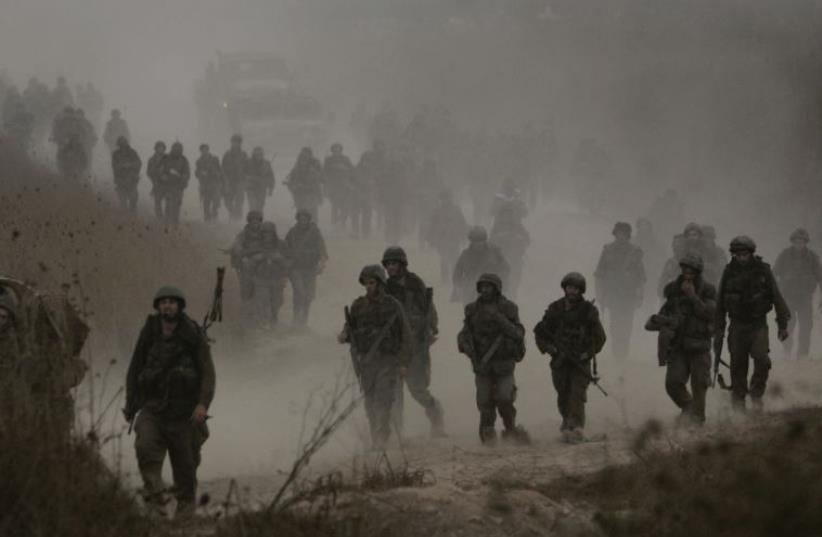 IDF troops return from Lebanese territory near Kibbutz Manara, August 15, 2016
(photo credit: REUTERS)
Advertisement
When US General David Petraeus, who commanded the successful Surge campaign in Iraq, was a young platoon leader in the army 509th Airborne Battalion, and made parachute jumps all over Europe, he trained with the French paratroopers. Then he read Jean Lartéguy’s novel The Centurions, a realistic novel about the wars France fought in Indochina and Algeria, a book that influenced him greatly. A passage Petraeus particularly liked, in which Lieutenant Marindelle, a French paratrooper, is explaining how the Vietnamese way of war was different from that of the French: “When we make war, we play Belote with thirty-two cards in the pack. But their game is Bridge and they have fifty-two cards: twenty more than we do. Those twenty cards short will always prevent us from getting the better of them. They’ve got nothing to do with traditional warfare, they’re marked with the sign of politics, propaganda, faith, agrarian reform.”Indeed, since the wars in Indochina, Algeria and Vietnam there has been a dramatic change in the nature of warfare. These wars introduced the “war among the people,” as British General Sir Rupert Smith named it. Instead of wars between states with industrialized armies the Western world finds itself fighting a hybrid adversary. It can be state or non-state, and can act as a proxy for state actors but have independent agendas as well. It’s an enemy that fights among the people rather than on the battlefield, using them for cover, concealment, support and protection. It operates with both conventional and irregular tactics, such as terrorist attacks, indiscriminate violence (by launching rockets on civilian population centers). Western industrialized armies were ill-suited to this new style of warfare. These new wars required armies to develop their counter-insurgency capabilities, strategy and forces.In his fascinating and important book War from the Ground Up, Emile Simpson, a former captain in the British Army Royal Gurkha Rifles, describe his first combat mission in Afghanistan.“As an infantry platoon commander in 2007, my first operation was the clearance of the Upper Gereshk Valley, Helmand, in a brigade-level operation. The insurgents were engaged, cleared out, and the mission was achieved. Yet the insurgents would also have claimed it as a victory because they had inflicted some casualties on us, and we did not stay to hold the ground we had cleared. The outcome of the operation in the longer term is debatable since several similar operations in the same area have been mounted since then. Moreover, the ‘meaning’ of the battle for local people was most likely nothing to do with who ‘won’. They would be far more concerned with the battle in terms of their own safety and property.”This description, which is familiar to anyone who served in the IDF and took part in raids in Lebanon, Gaza or the occupied territories, contains the entire problem. When the narrative of the two sides is on different levels and is shaped by perceptions of reality diametrically opposed, there is substantial difficulty in determining who won.Simpson argues in his book that the traditional war between states, as defined by Clausewitz, still existed (as proved by Russian President Vladimir Putin’s war in South Ossetia in 2008), but that there is another kind of war, what he calls “armed politics.” While the old wars had two main criteria: polarity – the idea that there are two sides to every conflict – and decisive outcomes, who are the poles in the Syrian civil war? How one can achieve a decisive outcome in such a conflict? Even when the polarity principle is realized, the war is was mostly between an army and a non-state organization that fights among the people. In such conflicts, one side is rarely completely destroyed. All that can be achieved is the imposition of our will on the opponent.So how does one win these new wars? Israel has found itself fighting such wars since 1982 war in Lebanon. In his recent book Dare to win, MK Ofer Shelah, a former Paratroopers company commander (who was wounded in the First Lebanon War) and a journalist, suggests a different way for the IDF to fight. Before a war, Israel, Shelah writes, “Must analyze and recognize the security doctrine of the enemy. The possibilities to act must be examined according to their ability to undermine it and place him in the same paradigmatic embarrassment we are at today, after the Second Lebanon War or ‘Protective Edge.’ If there is a possibility to achieve that – then, and only then, it is right to use force.”Victory will be achieved through an integrated and simultaneous campaign in which all efforts: legal, economic, military and political, are intertwined and support each other, unlike to the way it has been done in the past. For example, the political action can’t wait for the fighting to end. In the “war among the people,” the political action must be done in parallel to the fighting.The IDF strategy, published by IDF Chief of General Staff Gadi Eizenkot, is a step in the right direction, but it’s not enough. Israel must form a strategy at the state level (not just the military level) based on an understanding of the enemy structure, strengths and weaknesses in order to achieve its objectives in the next conflict against Hamas of Hezbollah.

The author is the coordinator of the military and strategic affairs program and cyber-security program at The Institute for National Security Studies (INSS). He is the founder and operator of the blog “In the Crosshairs” on military, security vision, strategy and practice.
Advertisement
Subscribe for our daily newsletter