Which team do you support – Team Merkon or Team Orbvini? 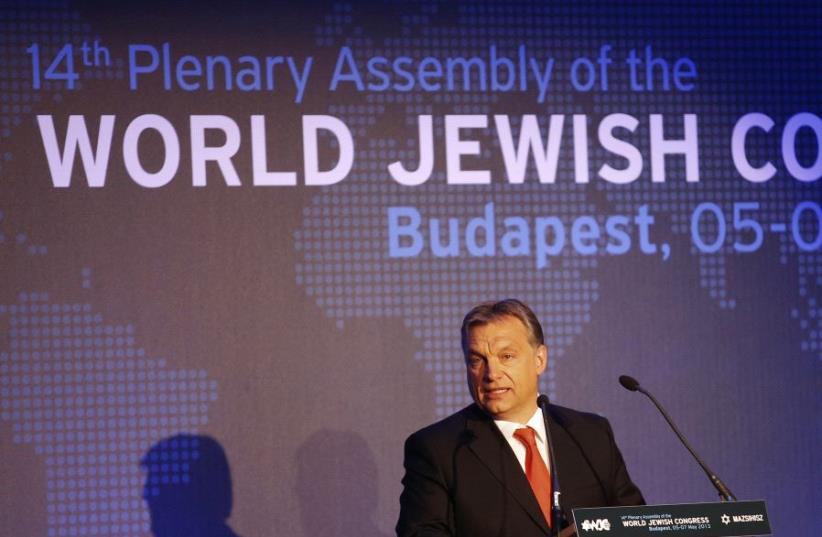 Hungarian Prime Minister Viktor Orban delivers a speech during the 14th Plenary Assembly of the World Jewish Congress in Budapest May 5, 2013
(photo credit: LASZLO BALOGH/REUTERS)
Advertisement
Israel, as last week’s Knesset votes decisively proved, is clearly part of the growing – and worrying – Orbvini phenomenon of illiberalism, nationalism and hatred of the Other.The terms “Merkon” and “Orbvini” have usefully been coined by Oxford University historian Timothy Garten Ash to describe the political fault line now dividing Europe. On the one side is the old order of liberal Europe, favoring liberal, European solutions, based on international cooperation, inside the European Union and globally. The most prominent proponents of this line of thinking are German Chancellor Angela Merkel and French President Emmanuel Macron, leading to the term “Merkon.”On the opposing side of the debate are the populists, who place immigration at the center of their campaigns and seek solutions which scapegoat, exclude or expel ethnically or culturally defined “others.” Hungarian Prime Minister Viktor Orbán, so warmly welcomed to Israel last week by Prime Minister Benjamin Netanyahu, and the Italian populist deputy prime minister Matteo Salvini (hence “Orbvini”) best exemplify this significant and highly disturbing trend.Orbán’s invitation to Israel was a disgrace. While Palestinian Authority President Mahmoud Abbas rightly came in for heavy criticism by the Israeli government for his recent statements about the Holocaust, Orbán escaped scot-free in the past for having praised Hungarian wartime Fascist leader Miklos Horthy as an “exceptional statesman.” Horthy, to remind our prime minister, was responsible for the systematic discrimination and persecution of Hungarian Jews leading up to the Holocaust and remained in office during the deportation of over 440,000 Hungarian Jews to Auschwitz. On top of this, and showing it was not a one-off blip, the Hungarian prime minister also ran a recent election campaign heavily tinged with antisemitic characteristics, based on attacking the Jewish Hungarian-born billionaire George Soros.But then, of course, Netanyahu has form when it comes to whitewashing right-wing central and eastern European politicians. His scandalous agreement to the rewriting of history in terms of Poland’s record on the Holocaust is a further example of how low our prime minister will scrape in return for securing support from some of the most illiberal leaders on the European continent. Luckily, Israel still has President Reuven Rivlin to provide some form of the moral compass so lacking in our prime minister. The president’s not-so-subtle dig, during his welcome reception for Orbán, in which he talked of the dangers of neo-fascism, was well placed and necessary. Historians of the future, though, will surely remark on the unsettling coincidence of Orbán visiting Israel in the immediate aftermath of the Knesset passing the Jewish Nation-State Law, a mark of shame on Israel’s statute books. UNLIKE ISRAEL’S Declaration of Independence, which guarantees the “complete equality of social and political rights to all its inhabitants irrespective of religion, race or sex” and calls on the country’s Arab inhabitants to “participate in the upbuilding of the State on the basis of full and equal citizenship,” the Jewish Nation-State Law simply ignores the existence of a fifth of Israel’s citizens, and downgrades the status of Arabic from an official language of the state to one with “special status.”Now one can argue over whether the fine words of the Declaration of Independence have actually been met in reality – there is plenty of evidence to suggest that Israel’s Arab citizens still lag far behind their Jewish counterparts on many measures – but at least the aspiration of full equality for all of Israel’s citizens is clearly enshrined as part of the country’s founding ethos. The Jewish Nation-State Law has none of this equality guff. The purpose of the law is quite clearly to tell Israel’s Arab population that they are not wanted here and should see themselves as second-class citizens. As Likud Knesset member Bennie Begin warned – the only member of his party not to vote in favor of the law – once patriotism is detached from a commitment to human rights for all, the slippery descent into dangerous nationalism has begun.There are many who would claim that Israel has already begun this dive into the depths of illiberalism, inequality and racism. In a gloomy speech the day before the vote on the Jewish Nation-State Law, former prime minister Ehud Barak talked of the combined forces of messianism and dark nationalism, so clearly present in today’s political climate, threatening the foundations of the Zionist-democratic state. The tragedy is that there is no one in the opposition who is clearly taking the fight to Netanyahu over the defining characteristics of modern-day Israel. If we want to be a liberal democracy, committed to the rights of the individual in all spheres, and the acceptance of minorities as befits the historical experience of the Jewish people, then now is the time to act and galvanize the country’s silent majority. The sudden wave of support for the country’s LGBT community – following their exclusion from the new surrogacy law also passed last week – shows that, perhaps, it’s not too late to stop Israel’s slide into joining Team Orbvini.The writer is a former editor-in-chief of The Jerusalem Post.