Delving deeper into the survey findings, it is clear that religious affiliation is the primary factor shaping the views of Jews on both sides of the Atlantic. 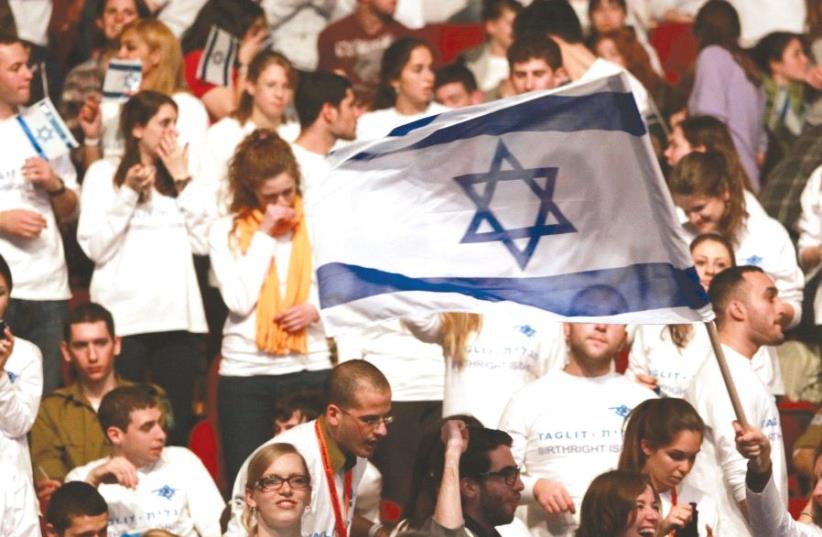 YOUTH ATTEND a Birthright-Israel event in Jerusalem.
(photo credit: MARC ISRAEL SELLEM/THE JERUSALEM POST)
Advertisement
Forty years ago, in 1978, historian Melvin Urofsky called his classic book on the relations between American Jews and Israel We Are One! At the time, the title – exclamation point included – drew little objection.Today, any such declaration of Jewish unity would come up against the hard facts detailed in a new American Jewish Committee survey of both American and Israeli Jews. The divide it reveals between the world’s two largest Jewish communities raises serious questions about the future viability of the relationship and challenges Jewish leaders to devise ways to keep the communities from drifting even further apart.Asked to choose a familial metaphor to describe how close they feel to each other, 31% of the Americans and 22% of the Israelis went so far as to respond: “not part of my family” about the other. Only 28% of the Israelis consider American Jews “siblings” – and that was more than twice as high as the 12% of American Jews who viewed their Israeli counterparts that way. Pluralities of about 40% in both groups responded, “extended family.”As Israelis live in a far more pervasively Jewish environment than American Jews, it is hardly surprising that the former have a much stronger Jewish identification than the latter, who, as a small minority within an overwhelmingly non-Jewish society, tend to espouse liberal, universalistic values.The AJC survey finds that Israeli Jews are more than twice as likely as their American counterparts (81% to 40%) to say that being Jewish is “very” or “most” important in their lives; 23% of the Americans say it is not “too” or not “at all” important, as compared to 8% of the Israelis. And not only do a higher percentage of the Israelis (88%) – compared to the Americans (79%) – consider a thriving State of Israel “vital for the long-term future of the Jewish people,” but more Israelis (78%) than American Jews (69%) believe that about the importance of a thriving Diaspora.The two Jewish communities are even further apart on current political issues. Most American Jews (57%) disapprove, either “strongly” or “somewhat,” of how President Donald Trump is handling US-Israel relations, but an even more lopsided majority (77%) of Israelis approve. And while the Americans are evenly divided over the US decision to move its embassy to Jerusalem, fully 85% of Israeli Jews support the move.On the peace process, American Jews have a somewhat different take on Israeli-Palestinian relations than Israeli Jews. Fifty-nine percent of the Americans favor the establishment of a demilitarized Palestinian state in the current situation, and the same percentage think that all or some of the West Bank settlements should be dismantled as part of a peace agreement. In contrast, the figures for the Israelis are 43% and 39%, respectively. Furthermore, a majority – 53% – of American Jews consider it appropriate for their community to attempt to influence Israeli policy on national security and peace-process matters, even as 68% of Israeli Jews consider it inappropriate.The two communities are similarly far apart on issues of religion and state in Israel. While there is considerable Israeli opposition to the current official monopoly that Orthodox authorities have over Israeli Judaism, it does not approach the level of American Jewish concern. Fully 53% of American Jews believe that the current system serves to weaken ties between Israeli and American Jews (of whom only a minority are Orthodox), but that view is held by only 40% of Israeli Jews.Asked their opinion of the non-Orthodox streams, 43% of American Jews said their growth in Israel could improve the quality of Jewish life there. Just 26% of the Israelis agreed, while a 30% plurality called those streams irrelevant to Israel. Four out of five American Jews favor Israel granting non-Orthodox rabbis the power to perform life-cycle events and conversions, a position espoused by 49% of Israelis. Eighty-one percent of American Jews and 55% of Israelis favor the introduction of civil marriage and divorce in Israel, and 73% of Americans, as compared to 42% of Israelis, favor a mixed-prayer area adjacent to the Western Wall.DELVING DEEPER into the survey findings, it is clear that religious affiliation is the primary factor shaping the views of Jews on both sides of the Atlantic. The more to the American Jewish religious “Right” one looks, the more likely will one find responses that echo the higher degree of Jewishness shown by most Israelis. For example, the 40% figure for American Jews who said that being Jewish is “very important” in their lives obscures wide variations among the denominations: This response was given by 99% of haredim, 93% of the Modern Orthodox, 61% of Conservative Jews, 33% of Reform Jews, and 13% of the secular.A similar pattern is evident on the Israeli side, where the responses of secular Jews most closely mirror those of American Jews. Thus, for example, 39% of the total Israeli sample say Israel should be willing to dismantle all or some of the settlements in a peace deal, but the figures for the religious subgroups show deep differences: 59% of the secular (exactly matching the percentage of the whole American sample), 39% of the not-that-religious traditional, 29% of the religious-traditional, 14% of the religious Zionists, and 12% of the haredim would dismantle settlements.A second significant variable on the American side is political allegiance. Those who reported having voted for Hillary Clinton are far less likely than Donald Trump voters to care deeply about Israel or feel close to Israeli Jews: more than twice as many Trump supporters as Clinton supporters agreed “strongly” that caring about Israel is “a very important part of my being a Jew” (67% to 33%); and while 22% of Trump voters considered Israeli Jews siblings, just 6% of Clinton voters did.The message of the AJC survey is clear. If the concept of a global Jewish community – am ehad – is to retain any meaning, each of its two major components must develop a greater appreciation for the priorities and needs of the other. If not, the next AJC survey will find even more American and Israeli Jews writing off those in the other country as “not part of my family.”The writer is the AJC’s director of publications. See the full survey at www.ajc.org/survey2018