No Holds Barred: Impose the same gun control on Iran that you would on the US

Americans seem passionately divided on whether new gun control measures are the solution to the carnage. 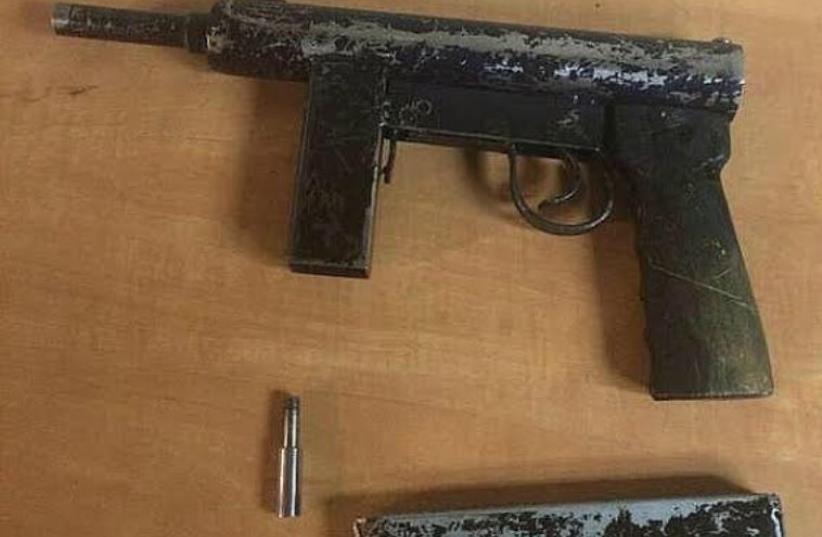 The machine gun seized from Palestinian teen at a Shuafat checkpoint, June 29, 2015
(photo credit: BORDER POLICE)
Advertisement
It seems that we hear every week, more and more, about one senseless public shooting after another. After each incident, advocates on both side of the firearms issue come out, guns blazing, trying to frame the incident in a way that supports their views on the Second Amendment. What I find mystifying is when politicians contradict themselves on these issues that they claim to be so passionate about, revealing double standards. President Barack Obama recently said, “The United States of America is the one advanced nation on earth in which we do not have sufficient common-sense gun-safety laws.Even in the face of repeated mass killings.” He is joined by Secretary of State John Kerry and Vice President Joseph Biden, among many of their fellow Democrats, who have pushed for limitations on what guns can be bought and what can be done to limit gun ownership.Americans seem passionately divided on whether new gun control measures are the solution to the carnage.But one has to wonder, then, why in the world is it suddenly acceptable to make a deal with Iran that will be guaranteed to increase the guns, terrorism and death that the ayatollahs will export? By now everyone knows that as part of the Iran deal $150 billion dollars will be made available to Iran as part of sanctions relief. Few doubt, and even National Security Advisor Susan Rice admitted, that Iran will almost certainly use the money to murder innocents and disseminate weapons to Iranian terrorist proxies operating across the Middle East and the globe.Rice expressed it as follows: “We should expect that some portion of that money would go to the Iranian military and could potentially be used for the kinds of bad behavior that we have seen in the region up until now.”Now, “bad behavior” seems an awfully innocent euphemism for international terrorism. But the point is the same: Iran will use the money to kill people.By signing the Iran deal, all those in Congress who support the agreement know that there will doubtlessly be untold suffering and death due to the guns, rockets and missiles Iran will purchase and use as a result.Arabs, Israelis, Americans and many others will lose their lives because of this agreement. So how could they vote for it? Many of these same politicians who so passionately state their deep convictions about gun control and keeping automatic weapons out of the hands of American citizens are suddenly mute when it comes to placing these guns in the hands of brutal murderers who will surely use them. Do any of us want the blood of these innocents on our hands? Can those who argue for gun control in America support a deal that provides guns to Iran? In President Obama’s speech to the nation when he defended the Iran deal, he casually stated his certainty that “Israel can defend itself against any conventional danger, whether from Iran directly or from its proxies.”One has to wonder if this logic is what is allowing the president to release these funds, which Iran will use to further its goal of the destruction of the State of Israel.Firstly, Israel has on its northern border Hezbollah, who now have more missiles than most countries on earth, aimed at Israel and ready to be unleashed at the order of the mullahs in Iran (we are not even discussing here the Iranian nuclear threat that Israel will soon face).When President Obama says that Israel can “defend” itself, he must mean that Israel would be able to survive as a country after a major conventional war that Iran may launch. While this may be true, that is of little consolation to the thousands of Israelis who could die in this war. And furthermore, when you hand those billions over to Iran, and they increase their arming of the terrorist groups surrounding Israel from every side with huge quantities of advanced weapons that could bombard Israel for weeks if not months, I think the president’s confidence in Israel’s abilities is a bit unhelpful. Try a little pessimism for a change when it comes to how great you think Israel is at absorbing and recovering from attacks while having to send its 18-year-old boys to the front line to die.And maybe, just maybe, consider the possibility that if you care so much about legislation getting guns off the streets in the US, you ought to be at least as concerned at releasing a tsunami of cash that will leave the Middle East echoing with the cries of the innocent and soaked in the blood of the helpless.The author, “America’s rabbi,” whom The Washington Post calls “the most famous rabbi in America,” is the international best-selling author of 30 books. He will shortly publish The Israel Warrior’s Handbook. Follow him on Twitter @RabbiShmuley.