I believe the president’s posture in Syria also preserved his ability to negotiate a nuclear agreement with Iran while presenting Iran with an advantage. 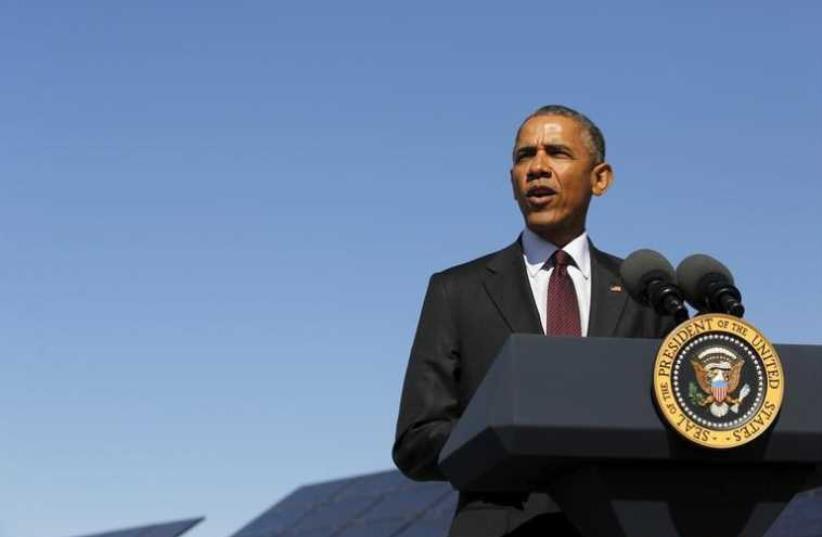 US President Barack Obama delivers remarks on clean energy after a tour of a solar power array at Hill Air Force Base, Utah
(photo credit: REUTERS)
Advertisement
I wish this was easier. I want to believe. I understand what the president wants to do and frankly I want to support him. Diplomacy is a better answer than war unless there is absolutely no other choice. But can the process of diplomacy be utilized as a wall to not only fend off war, but also fend off diplomatic alternatives? Well, I already wrote “The Train has left the Station” (Times of Israel), in which I basically stated that Obama’s diplomacy created just such a shield against all substitutes, which has been further cemented by the 15-0 affirmative vote taken (against the bipartisan will of the Senate Foreign Relations Committee) in the United Nations Security Council.The president added on July 15 that he would veto any legislation that prevents the successful implementation of this deal: “As Commander- in-Chief, I am confident that this deal will meet the national security interests of the US and our allies. So I will veto any legislation that prevents the successful implementation of this deal.”I have read the Joint Comprehensive Plan of Action (JCPOA), and admit that I am neither an MIT-trained nuclear physicist, a Yale-educated secretary of state or the former editor of the Harvard Law Review. I am not even a practicing politician or full-time journalist. Just a Jewish American that pays pretty close attention to this stuff and has grown rightly cynical given the history of Iran as a nuclear cheater (Natanz and Fordow) and worse, a primary if not the primary exporter of terrorism throughout the Middle East and far beyond. I also listened closely to the words of the ayatollah against both the United States and Israel since the deal was concluded.During his recent interview on The Daily Show, President Barack Obama told host John Stewart regarding his critics that, “Typically, they’re vague and they fall back on ‘well, if you had beat your chest a little more – or if you had brought Dick Cheney to the negotiations, then everything would be fine.’” The case can be made that when President Obama moved away from his definite red line on Syrian chemical weapons he told friend and foe alike he was unwilling to put US forces in harm’s way. This president has not been afraid to use his military, but he was elected (and reelected) in part to satisfy his pledge to bring our boys home from two largely unsuccessful battlefields and to deal with an economic crisis that required that more resources be directed to domestic needs.I believe the president’s posture in Syria also preserved his ability to negotiate a nuclear agreement with Iran while presenting Iran with an advantage.Those are tough words, but words that coincide with who was pushing and who was pulling the negotiations and who was able to add in a fiveyear limitation on military purchases and an eight-year limitation on ballistic missile purchases (even as the White House reminded Americans that the only way to complete the nuclear agreement was to exclude all other issues).The real task at hand is no longer challenging the deal itself, but enabling the US Congress to create, enact and implement a series of amendments that plug critical holes while at the same time being seen as necessary and achievable by the UN Security Council and the international community. That is the only task that matters. Beyond the debate and the politics in America, Israel and elsewhere there must be an effort to develop a consensus to back up the “managed access” 24-day clause covering military sites (some 50 of which are identifiable), along with so-called secret sites for further scrutiny that will take away virtually any Iranian incentive to cheat, by not only providing additional investigative authority but also reinforcing the cost of being caught, beyond the unlikely application of “snap back” sanctions by Security Council members more interested in the benefits of uninterrupted trade with Iran.There is also the problem of what happens after 10 years, and a process must be established now to respond effectively to that issue in the time available.Is it enough? I pray so. Is it possible? I believe so, if Congress puts down its partisanship and reaches out through the leadership of both parties to the White House, to the UN, to Israel, the Saudis and academic institutions as well as positively (as positively as possible) to Iran, by seeking an agreement that meets these requirements even as it permits Iran to retain its honor and a formula for access to the international community.

The author is president of ICMEP; Interfaith Community for Middle East Peace, an NGO based in suburban Philadelphia. He can be reached at [email protected] yahoo.com.
Advertisement
Subscribe for our daily newsletter