For 12 lone soldiers all from English-speaking countries, they no longer are without family. 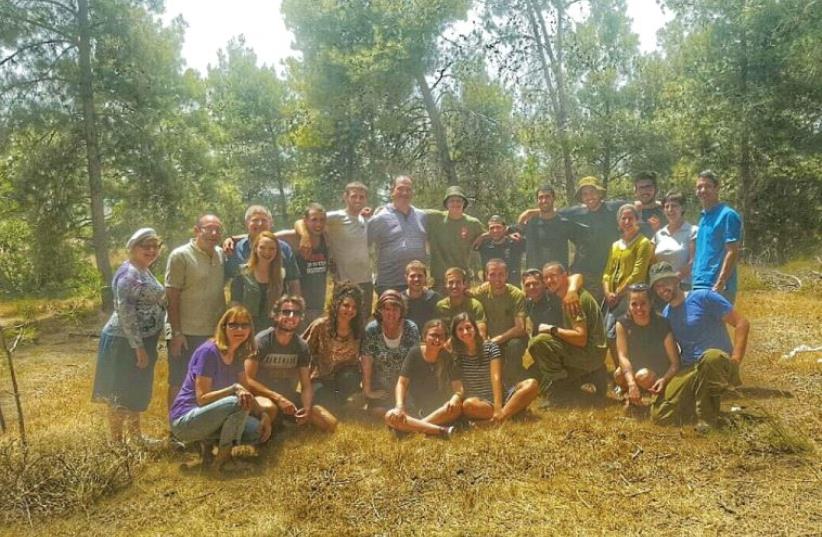 The 12 soldiers who live in the Beit Shemesh Lone Soldiers’ Home with the counselors, board members and spouses on a fun day out
(photo credit: Courtesy)
Advertisement
Shortly after arriving in Israel from the Soviet Union, Natan Sharansky was asked how he felt going from a country with abundant natural resources – Russia leads the world in oil production, along with Saudi Arabia – to a country with almost no natural resources (this was before the discovery of substantial oil and gas fields here). Sharansky replied that Israel’s prime resource is above the ground, not below it – in the person of stellar human beings who possess priceless qualities of intelligence, creativity and integrity.We have an amazing propensity, despite our hard-shell exterior, for performing acts of kindness for others, for volunteering and for “filling in the gaps” – services that our government and social services may not always be able to provide. Israel is a rich country with poor people – or is it a poor country with rich people?! – that survives so well because so many everyday, simple, good people step up and decide to do something extra to make life more livable for those in need.The extended Rachamim family lives a few blocks away from me. Their two adjoining homes are modest, with an expansive yard that takes up a halfblock.The Rachamims have a family “business”: They distribute virtually every kind of item to the less fortunate. Clothes of all types, children’s toys and games, used appliances, shoes, linens, pots, pans and dishes are stockpiled on their property. People from throughout the city drop off their used items, and others come by to browse and choose the things they need.Three generations of the family lovingly help them. They have been doing this for more than a decade now, the parents and grandparents training their children to take part, and they ask for one or two shekels in payment, “to make the people feel that they are buying, getting a metzia [bargain], rather than simply taking charity,” explains grandmother Batsheva. The money collected is then given to the poor.On Friday afternoon, the family goes to the various bakeries in town, which donate hallot that weren’t sold that day, and gives them out to dozens of people who come by before Shabbat looking for bread.I ask grandfather Shaul what inspires him to keep this project going, week after week; why he goes out of his way to help so many. He looks at me with a curious stare and simply says, “It’s what we do.”Vici restaurant in Ra’anana (vici.rest.co.il) does more than serve delicious food; it sponsors a program called Pay It Forward. Diners can purchase a voucher for soldiers to enjoy a free meal any time they like. They pin a note on the bulletin board with a message to the soldiers – “This is the least we can do for you, for keeping all of us safe,” reads one note there – and soldiers come in, usually on Thursday and Friday, when they return home for Shabbat.Owner Idan Ianovici was once a lone soldier himself in the Artillery Corps, and fondly remembers the falafel shops and cafes that reached out to him when he was hungry and in uniform. After returning to the US and working at various restaurants – including Katz’s Deli in New York – he came back to Israel and opened his own place.“Life’s not just about the money,” he says. “You’ve got to give something back.”Apropos lone soldiers, Wendy Serlin and Gayle Shimoff moved to Ra’anana 20 years ago and later became neighbors in Beit Shemesh. Both have children serving in the IDF. During Operation Protective Edge in 2014, as they worried about their own sons in combat units, they wondered how lone soldiers could be better provided for when far away from their families: Who would do their laundry or give them a home-cooked meal? Where would they go when on leave? And so they embarked on an ambitious project: to create a home away from home for lone soldiers. They called a meeting of the community and began to fund-raise. They contacted the Michael Levin Center for Lone Soldiers and Bayit Shel Benji in Ra’anana for advice.They rented a home and furnished it with new beds, washing machines, dryers and other essential equipment.They collected donations of furniture, pictures, a stereo, computers – all the things to make soldiers feel at home.And they hired a young couple as counselors.Today, 12 soldiers live in the home, all from English-speaking countries. They no longer are without family; thanks to Serlin and Shimoff – two energetic ladies who saw a need and filled it – they have been adopted by an entire community.(To help, contact gayle@lonesoldiercenter.com.) The current Hebrew month of Elul is the gateway to the High Holy Days of Tishrei, when, on Rosh Hashana and Yom Kippur, we join together with our congregations to offer communal prayers for repentance and God’s blessing.But Elul is more about the individual mission to engage in introspection, to correct our misdeeds, and to somehow raise our personal level of goodness and holiness so that we might approach our Creator with confidence and strength.The symbol of this effort is the shofar; it calls us to action as it is sounded each morning. The word “shofar” stems from the same Hebrew root as lehishtaper (to improve oneself). Each of us can certainly do something to better the lives of others and, in so doing, change our own lives.Do not ask for whom the shofar blows; it blows for thee.

The writer is director of the Jewish Outreach Center of Ra’anana and a member of the Ra’anana City Council; jocmtv@netvision.net.il