Are we victors or victims? 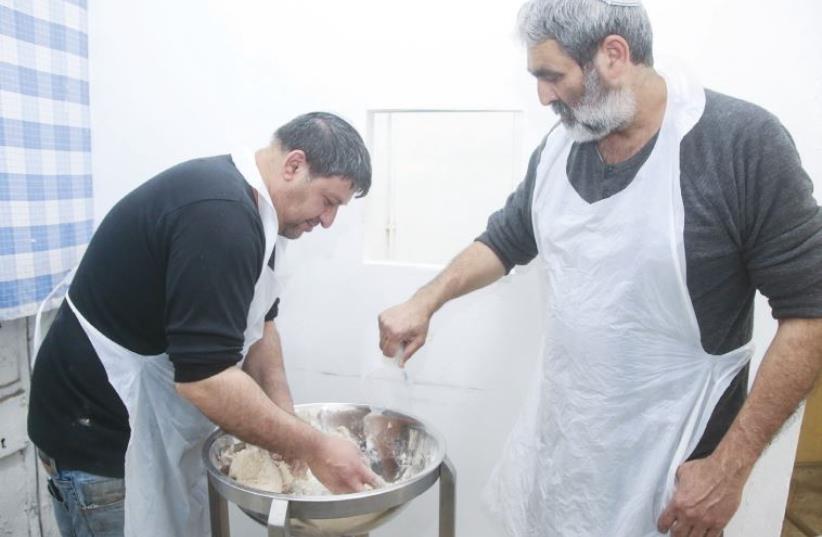 Making Matza
(photo credit: MARC ISRAEL SELLEM)
Advertisement
Although there are innumerable themes relating to Passover, there is one central motif to the Seder: slavery and freedom. All the various items on our Seder table relate either to our century-plus bondage in Egypt, or to our liberation and subsequent journey to Israel. The maror (bitter herbs), the salt water into which we dip our karpas (vegetable) and the haroset – meant to simulate the mortar used for building – all hint at our enslavement. The Four Cups of wine and the festive meal clearly celebrate our emergence as a free people.Ah, but what of the mysterious matza. What does it signify? On the one hand, the matza represents our desire to faithfully follow God and Moses at the moment our exodus began. We were in such an ecstatic rush to exit that we could not even wait for our dough to rise. As such, the matza is a kind of “unleavened flag,” which we wave in tribute to our triumphant emergence into freedom. On the other hand, though, we refer to matza as lehem oni (poor bread), indicative of the meager fare that we were forced to eat as slaves. Matza, it seems, has two very distinct sides to it.This duality of the matza, I suggest, has a profound lesson to teach us.There was a time, long ago, when we Jews had a royal kingdom, ruled by kings, graced by prophets and judges, and glorified by a magnificent Temple that was a wonder of the entire world. For centuries, we were seemingly invincible. But then, alas, our dream existence dissipated. For generations on end, we wandered, bitterly, painfully, across countless countries, enduring every type of indignity that cruel oppressors could put upon us. We became the archetypal victims of history.In the course of our sojourn through the Exile, we came to accept our dismal condition. When Muslim societies required us to walk in the street only, rather than on sidewalks – so as not to be physically higher than our hosts – we submitted to them. When Christian communities preached to the masses that the Jews had been rejected by God, “superseded” by the followers of Jesus as the true “Chosen People,” we bit our collective lips and endured the insults cast our way. We had little choice.But at times – strange as it may sound – we were not only resigned to our fate, we even embraced our victimhood. This was the part, we ruefully concluded, that we were destined to play, and play it we shall.Moses, the hero of Passover, recognized this bizarre trait way back in Egypt. The slaves he struggled to set free resented his efforts, bitterly criticizing him: “Why did you take us out of Egypt, the Land of Milk and Honey” they said, with a biting sarcasm, “only to die in the desert?” They waxed poetically about their lives in bondage, longing to return to their servitude and their taskmasters, in what I call the “I’ve grown accustomed to his mace” syndrome. In a play on words, the rabbis say that Moses’s primary, and most difficult, task was to rid the Israelites not of the “sivlot Mitzrayim,” the burdens of Egypt, but “sovlot Mitzrayim,” their tolerance of living willingly under the Egyptian whip.Today, miraculously, we have returned to our ancient homeland and built a strong and powerful nation. We conduct ourselves with the highest of moral standards, repudiating the wickedness of our neighbors and standing out as a beacon of light in a very dark neighborhood. And yet, we often still have great difficulty accepting our role as victor, rather than victim. We almost have to apologize for how well our country functions in comparison to others, for our victories in war after war, and for our stubborn refusal to roll over and die.This pathological paranoia is dangerous to our national health. It caused us to tragically delay responding in the Yom Kippur War – unlike our brilliant first strike just six years earlier in the Six Day War. It forces us to insanely warn our enemies before retaliating against their rocket launchers. It results in our suing for peace and offering a multitude of concessions as if we had lost, rather than won the battle.Even as hundreds of thousands of deadly rockets are pointed at our cities, we hold back from aggressively attacking the enemy, instead working feverishly to prop up a defensive shield that we pray can stop a massive barrage.There is no shame in acting humbly, in taking the high road rather than duplicating the depravity of our adversaries. But there is no pride in being second-rate, submissive or a slave, either. And there is no need to beg forgiveness for being strong, stalwart and victorious, even if that irks and irritates the United Nations. As the late Rabbi Meir Kahane so famously said, “Better one strong and determined Israel that the world hates, rather than a thousand Auschwitzes that the world loves.”As to our initial inquiry into the nature of matza, the rabbis note that there is an indicator as to whether an item at the Seder stands for slavery or freedom: We recline, in relaxed, royal fashion, for the symbols that signify freedom. The verdict on matza? It is that we lean. Let us hope that we will always lean toward victory, and not victimhood. ■

The writer is director of the Jewish Outreach Center of Ra'anana; jocmtv@netvision.net.il
Advertisement
Subscribe for our daily newsletter