We, Israeli citizens as well as the asylum seekers from Eritrea and Sudan, ought not to fight against each other. We need to fight together for a solution. 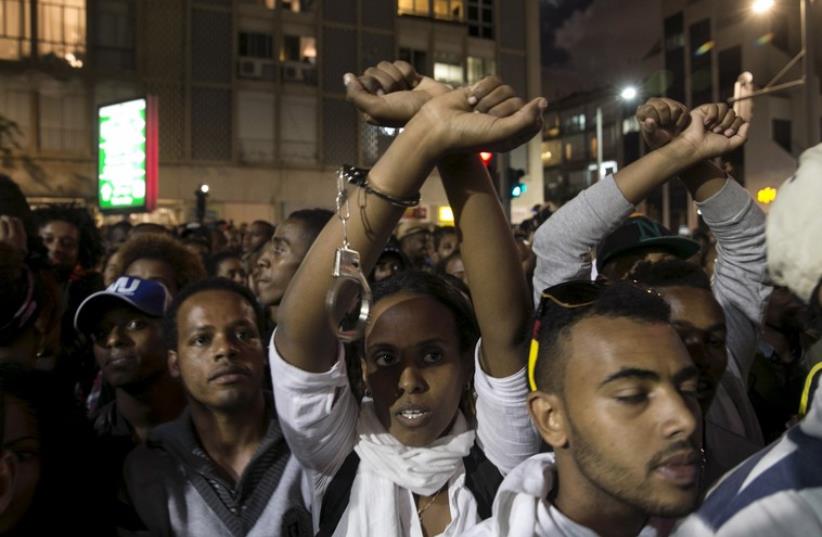 Ethiopian Israelis take part in a protest in Tel Aviv on May 3 against police racism and brutality
(photo credit: REUTERS)
Advertisement
A modest party had been arranged for the graduation of an asylum seeker from Darfur, upon his receiving an MA in conflict resolution from the Interdisciplinary Center Herzliya.A video that went viral on social media shows how fast the Israel Police was to join the celebration: its officers arrived shortly before 11 p.m. Initially they demanded the music be toned down. Once that happened, the party was dispersed, and the officers required everyone to step outside one at a time. Any non-white attendee had to present his/her visa, in what has been described as a scary and humiliating experience. Five attendees were arrested and might end up in the Saharonim detention facility for an unknown time.First of all, why write of an “asylum seeker”? An amendment to the Prevention of Infiltration Law from 1954 defines any person migrating to Israel through an irregular border crossing as an “infiltrator.” When MK Yair Lapid (Yesh Atid) recently addressed the plight of Eritrean and Sudanese refugees traveling to Europe on small boats through the high seas, he did so with compassion.In the European context, both right- and left-wing Israeli media describe them as refugees. However, when Israeli politicians and media refer to the 47,137 Eritreans, Sudanese and other Africans (as of October 2014, according to the Administration of Border Crossings, Population and Immigration) who entered Israel through equally horrendous tribulations, they are accused of “infiltration,” “stealing our jobs” and “spreading disease.” Terminologies create realities, and in this instance one must choose between the racist (and legal) “infiltrators,” and the compassionate “asylum seekers.”Secondly, why are the efforts to integrate migrants into the normality of Israeli life only by voluntary civil organizations, while the government remains involved exclusively in enforcing its visa regime (even in the midst of a private graduation party)? True, Israel has a clear interest in effectively enforcing an immigration policy. Such an immigration policy would halt the unnecessary“ import” of labor migrants by human resources companies that are making illegal profits from brokerage fees, as well as regulate the legal and illegal residency of individuals in the country.At the same time, Israel deserves an effective immigrant policy, which would allow those who do reside in the country to be properly integrated. Such a policy would allow non-Jewish migrants to work for Israeli businesses, rather than steal. It would allow them to proudly raise their children, instead of stuffing them for endless hours in pirate kindergartens with poor conditions. Yes, it would also allow them to freely study for an MA in conflict management at the IDC Herzliya.Not only for the sake of a dream in which that higher education and positive experience accumulated in the Israeli democracy could one day serve them in rebuilding their war-torn countries upon return, but mainly because when those migrants live in reasonable conditions, it benefits all of us. The case for an immigrant policy – originally made by Professor Rebeca Raijman and Dr. Adriana Kemp of Haifa and Tel Aviv universities – is good for the residents of South Tel Aviv, Eilat, Ashkelon and other areas of high concentrations of non-Jewish migrants.There can be no doubt about it: the conditions in South Tel Aviv, for example, are intolerable. It is infested with crime, fear and genuine distress. The residents of those neighborhoods cannot be blamed for feeling pressured, and must not bear the responsibility for somehow making an impossible situation possible. On the other hand, the concentration of myriads of asylum seekers in neglected neighborhoods does not emanate from their evil intentions. These are people who have crossed burning deserts, have been beaten up, financially extorted, raped, humiliated, threatened, only to arrive at a foreign country in which they’re unwelcome. Fundamentally, they do not mean harm.Our trouble, finally, is that our thinking as a society has undergone a process of “sectorialization,” as Professor Danny Gutwein calls it. This considers Israel as torn with conflicting interests and destined to play an eternal zero-sum game: locals against foreigners, ultra-Orthodox against Russians, Arabs against settlers, Ashkenazim against Mizrahim, Tel Avivians against Jerusalemites, and so on. Every group has is its own party in the Knesset, each one wants to end up on top of the others. Every new wave of aliya is received with pomp and glory at the airport, but xenophobia quickly follows in schools and other public spaces.An alternative approach may be that we all turn to the government instead of turning against each other. Tel Aviv’s mayor, Ron Huldai, needs to take care of the problems that the residents in the southern part of his city are facing. Prime Minister Benjamin Netanyahu has done well to have set up a barrier on the border between Israel and Egypt to minimize unauthorized entries through the Sinai Peninsula, but Interior Minister Silvan Shalom needs to work hard with the United Nations High Commissioner for Refugees to agree on a humane and reasonable solution. This is not out of our reach: just recall the Vietnamese refugees welcomed by prime minister Menachem Begin, or the Bosnian ones accepted by prime minister Yitzhak Rabin.We, Israeli citizens as well as the asylum seekers from Eritrea and Sudan, ought not to fight against each other. We need to fight together for a solution. Hopefully then local residents of the cities most affected by migration may all breath a sigh of relief, and an asylum seeker from Sudan can graduate in peace.The author is a PhD candidate at the Goethe University in Frankfurt.