Into the Fray: Jewish hate crimes and vandalism are NOT terrorism

Public attention has been diverted from foiling the Iran nuclear deal in Congress by sanctimonious hand-wringing over crimes of individual perpetrators on outer fringes of Israeli society. 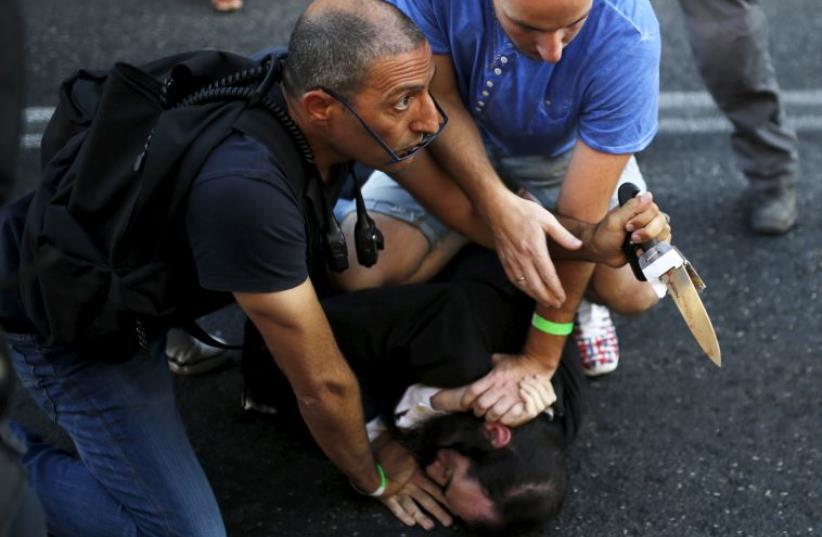 Attack at Jerusalem Gay Pride Parade
(photo credit: REUTERS)
Advertisement
We can and we do [b]urn children alive, execute murderous, inhuman, incomprehensible terror. And no, we’re no better than them.... – Sima Kadmon, “We’re no better than our enemies,” Ynet

They are no different than ISIS… this is Jewish jihadism, identical in every detail to Islamic jihadism – Ron Ben-Yishai, Ynet Israelis stab gay people and burn children. There isn’t a shred of slander, the slightest degree of exaggeration, in this dry description – Gideon Levy, Haaretz The events of last week cast doubt on the ability of Israel to survive the merciless brutality that surrounds it.Deplorable acts by fringe elements The insanity – and there is no other word to describe the frenzy that seized the public debate over acts, however heinous, perpetrated by a handful of individuals (some yet unidentified) – on the outermost fringe of Israeli society, betrayed a dangerous and dysfunctional disability in the nation’s capacity to order its priorities.For in what is arguably the most fateful 60-day period in recent decades for the Jewish state, when all the nation’s energies should be focused with laser-like intensity on foiling the perilous Iran nuclear deal before Congress, attention has been diverted by sanctimonious hand-wringing and moralistic self-flagellation over crimes of individual perpetrators on the very margins of society.From the outset, let me state categorically that the torching of an family’s house in the Palestinian village of Duma, by as yet unknown assailants, causing the death of their infant son; the stabbing of participants of the gay parade in Jerusalem, and the arson at the Church of Multiplication on the shores of the Sea of Galilee are all deplorable crimes.No democratic society can accept them and it is imperative that their perpetrators be sought out, apprehended and punished to the full extent of the law.But for all the abhorrence one might feel for these nefarious acts – an abhorrence expressed by the entire Israeli mainstream – to blame them on Israeli society as a whole is as deceptive as it is despicable, as mendacious as it is malevolent, as preposterous as it is pernicious.It is little more than a contemptible and cynical exploitation of tragedy to regain relevance for a political credo that has been regularly rejected by voters at the polls and repeatedly disproven by bloody realities on the ground.

Those urging equating Jewish hate crimes/vandalism with Arab terrorism claim that preemptive extrajudicial measures could have prevented past transgressions.Thus Ben-Yishai claims, “Had they treated Jewish terrorists the way they have been treating Arab terrorists, they could have prevented many of these acts of murder, arson and vandalism. Had they kept these “price tag criminals” in administrative detention for years, as they do with Arab terrorists when there isn’t enough evidence for a conviction, the Jewish terrorists could have been stopped from carrying out their plans.”Kadmon expresses similar sentiments: “Don’t condemn the criminal acts after they happen. Prevent them.”But that can be said of any crime and any suspected wrong-doer.Are their victims any less deserving of preemptive protection than Palestinian victims of Jewish ideological malefactors? And if not, why not use extrajudicial measures to ensure their safety? Clearly then, the logic of those who would equate Jewish extremism with jihadist terrorism shows no real regard for democratic governance – only fierce political partisanship.In a rare moment of like-mindedness I found myself agreeing with Meretz chairwoman Zehava Gal-On, who, commenting on administrative detentions declared: “It cannot be that the solution for the police’s ineffectiveness is arrests without trial and due process.”I never thought I’d say this, but Gal-On is right.Martin Sherman (www.martinsherman.org) is founder and executive director of the Israel Institute for Strategic Studies (www.strategic-israel.org) .
Advertisement
Subscribe for our daily newsletter