Iran broadcasts its humiliation of America

America must stop bowing to Iran and seeking opportunities to ignore or excuse its repugnant behavior. 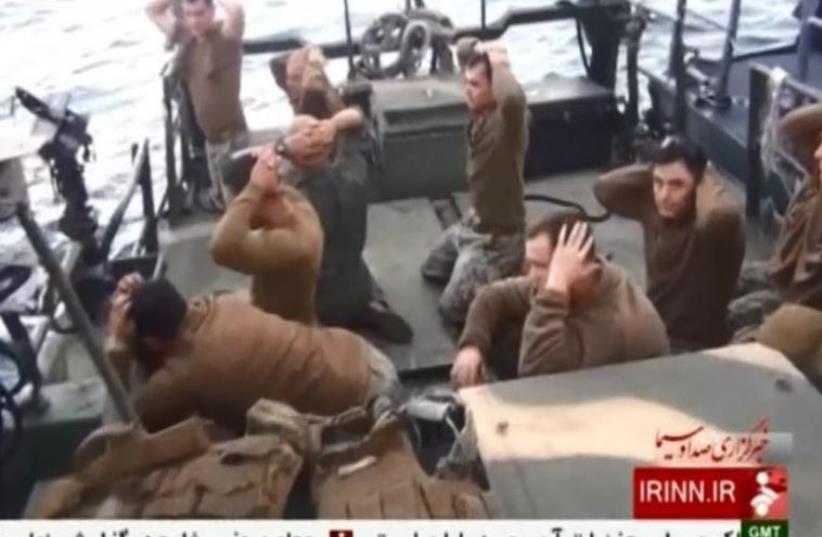 US sailors detained by Iran were release on January 14, 2016
(photo credit: screenshot)
Advertisement
The images that flashed on television screens all across the world this week were an epic propaganda victory for Iran and the latest in a series of reminders that the Obama presidency’s biggest foreign policy “achievement” is destined to leave a legacy of even greater bloodshed and conflict.  Iran, literally and figuratively, has brought America to its knees.That was the obvious point Tehran sought to rub into America’s face when it chose to broadcast video of the American crew aboard two small Navy boats, on their knees with hands interlaced behind their heads, surrendering to soldiers from Iran’s Revolutionary Guard Corps.  Iran served up a triple dose of humiliation with images of the detained soldiers in captivity and the televised statement of one American serviceman admitting wrongdoing and apologizing.The video is an absolute outrage that flies in the face of the Geneva Conventions, which outlaw the parading of prisoners for purposes of propaganda and insults. The reaction of the Obama Administration to the incident has also been utterly feckless, owing to the total lack of willingness to do anything except kiss the boots of the world’s leading state sponsor of terrorism, which has the blood of hundreds of Americans and many other victims on its hands.Just one hour after the demoralizing propaganda videos were cynically released by Iran, US Secretary of State John Kerry stated the following: “I want to express my gratitude to Iranian authorities for their cooperation ‎in swiftly resolving this matter.” He added: “I’m appreciative for the quick and appropriate response of the Iranian authorities.”Appropriate response.  Really?These are very dark days for America when our President and his minions rush to fall over themselves to appease a power-hungry regime hell-bent on threatening its neighbors and world peace while decrying us as The Great Satan and each week chanting “Death to America” at state-sponsored rallies.Apparently, the Administration will do anything in its power to ensure that whatever provocations and threats that Iran throws our way will simply be absorbed so that we can ensure that the woeful Iran nuclear deal is permitted to chug forward uninterrupted.Literally in days, Iran is slated to receive sanctions relief that will allow hundreds of billions of dollars to flow freely and empower Tehran to pursue its violent and hegemonic actions in the Middle East.Since Iran inked its deal with America and other nations, it has without penalty simultaneously threatened and thumbed its nose at the world.  In flagrant violation of the UN Security Council, Iran just weeks ago tested ballistic missiles capable of delivering nuclear weapons. President Obama’s obsession with protecting his legacy achievement on Iran’s nuclear program has blinded the Administration and led it to ignore, at all costs, the obvious indications that the foolish deal will only serve to embolden and financially boost an avowed enemy of our nation.By agreeing to a deal that will deliver huge financial gains to Iran while simultaneously making Iran’s pursuit of a nuclear weapon all but a fait accompli if Iran can just wait a few years to accelerate its program, Obama has essentially placed a hangman’s noose around America’s neck and handed over the rope to Iran. America must now tread lightly for fear of incurring the wrath of the hangman.  If we act to actually protect our national security or interests, then we risk Iran reneging on the nuclear deal, warns the White House.  For proof, just look at the way the Administration has given Iran a pass on every outrage and violation that Tehran has carried out since the deal was completed, despite the long –term consequences that will arise from allowing the radical Islamic state to notch indignity after indignity at our expense.  After all, the Administration reasons, if we do anything to upset or offend Iran it may walk away from the deal and deprive the President of his crowning achievement.  It’s an amazing predicament entirely of our own choosing.    Meanwhile, the American hostages from our Navy may have been set free, but what of the other Americans still kept in captivity in Iran and unjustly imprisoned?  They continue to rot, while the United States and the international community refuse to demand their release and push Iran toward action.Having spent the better part of my career working in television and media, I have learned that all too often perception is reality.  The perception that Iran is dominating the United States and literally bringing us to our knees is something that Tehran desperately hopes to foment as it pursues a strategy to increasingly oppose the United States and threaten its neighbors into subservience. That is the reality that Tehran seeks to create.America must stop bowing to Iran and seeking opportunities to ignore or excuse its repugnant behavior.  By doing so, we are feeding the perception that we are unwilling to stand up for our principles and are actually providing Iran with more opportunities to bully and humiliate us. Armstrong Williams is sole owner/manager of Howard Stirk Holdings and national TV broadcast and radio host in the USA.