An opportunity has arisen for the various sides to begin seriously addressing Israel’s existential problems, if they only wake up and understand that the present needs to be fixed through the lens of creating a viable future. 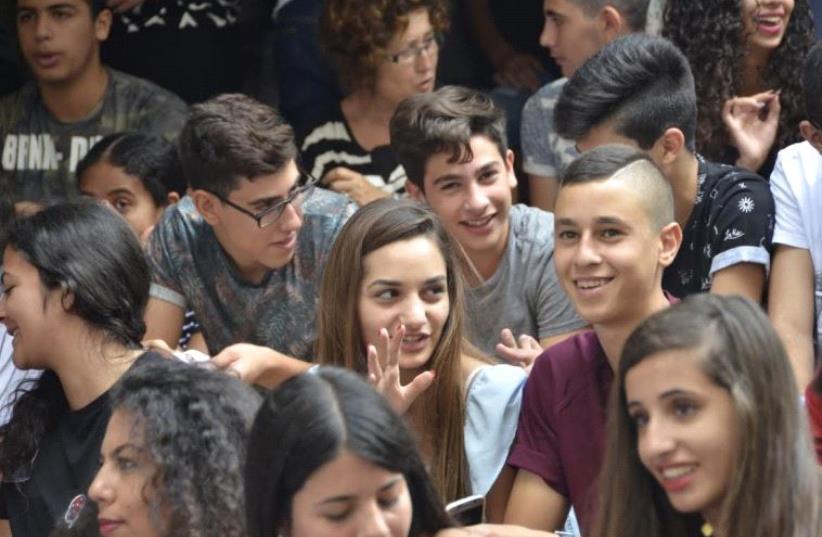 Arab and Jewish high school students on the first day of school
(photo credit: COURTESY AMAL MATTAR)
Advertisement
In an age when opinions substitute for facts, when spin replaces vision and when partial information turns into misleading narratives – if not outright false ones – Israel enters into one of the most fateful periods in its history. The decisions that we will be making in the coming years will determine if there will even be a country here in two to three generations. No less than that is currently on the table.In this nation of shortcuts, it would be a good idea to understand the overall picture and internalize its implications. The country’s hi-tech sector is amazing, truly groundbreaking. But when looking at the country as a whole, Israel’s gross domestic product per work hour (labor productivity) is one of the lowest among developed countries. Exacerbating the situation, Israel has been steadily receding from the leading G7 countries (USA, Canada, England, Germany, Italy, France and Japan) for decades. As shown in the graph, the gap between the G7 average and Israel has more than tripled since the mid-1970s. Israel cannot withstand another 40 years of this kind of graph.Israel has some of the best universities in the world. However, its level of education in core fields (mathematics, science and reading) is below all 25 of the relevant developed countries – and this excludes the ultra-Orthodox (most of whom do not study the material at all and do not participate in international tests) who would have lowered the national average even further.Israel’s Arabic-speakers’ level of knowledge in the core fields is below nine out of the 10 predominantly Muslim countries that participated in the most recent Program for International Student Assessment (PISA) exam. Joining the ultra-Orthodox (about one-fifth of the children) and the Arabs (almost a quarter of the children) are many of the children in Israel’s geographic and social peripheries who also receive an abysmal level of education.In other words, about half of Israel’s children are today receiving a third-world education – and they belong to the fastest growing parts of the population (according to Central Bureau of Statistics forecasts, the ultra-Orthodox alone are expected to comprise half of Israel’s children in just two generations). As adults, the children of Israel will not be able to maintain a first-world economy, without which there will be no first-world healthcare system and no military capability to defend ourselves in the planet’s most dangerous region.ALREADY TODAY, about half of the population is so poor that it does not reach the lowest rung of the income tax ladder and pays no income tax at all. Fully 92% of all income tax revenue comes from just 20% of the population – a group that includes the most educated and skilled Israelis. The more Israel recedes from the leading developed countries, the longer we continue to not provide the tools and conditions that would enable all population groups to fully participate in a modern economy, and the more we increase the burden on ever-narrowing shoulders – shoulders that have alternatives abroad – the closer the miracle that is Israel progresses toward its end.This does not have to be our destiny, and it’s not too late for a national pivot. The awful combination of health, economic, social and leadership crises has also created an opportunity. This is the first time that the primary political discourse is not between Left and Right, between religious and secular or between Jews and Arabs. An opportunity has arisen for the various sides to begin seriously addressing Israel’s existential problems, if they only wake up and understand that the present needs to be fixed through the lens of creating a viable future.A short article is insufficient for providing an overall perspective, but those who are interested can visit the Shoresh Institution’s website (www.Shoresh.institute) for additional details. What remains is to outline the general direction that the next government should adopt:1. Comprehensive reform of the education system: from a significant upgrade of the core curriculum – and mandating by law that all Israeli children must study it (as is required in every other developed country) – through a change in the way we choose, train and compensate teachers, to a structural reform of the entire education system.2. Reforming the currently dysfunctional system of government to enable the executive branch to govern the country and enforce its laws, alongside institutionalization of serious checks and balances that will provide the legislative branch effective oversight.3. Legislating a constitution that will set in stone Israel’s underlying tenets and make it difficult for anyone who may one day try to move us backward.Israel is facing a demographic-democratic point of no return. Laws that are already very difficult to pass today will be impossible to pass in the Knesset after we cross that Rubicon. An Israel desiring life must shift away from the shallow and superficial discourse that pervades it and to begin seriously dealing with the primary challenges that literally endanger its future.Prof. Dan Ben-David heads the Shoresh Institution for Socioeconomic Research and is an economist at Tel Aviv University’s Department of Public Policy.