Is Trump dangerous for the US and Israel?

Trump has demonstrated time and again that he lacks basic knowledge about our Constitution and rules of governance, and that he is reckless, insecure and unpredictable. 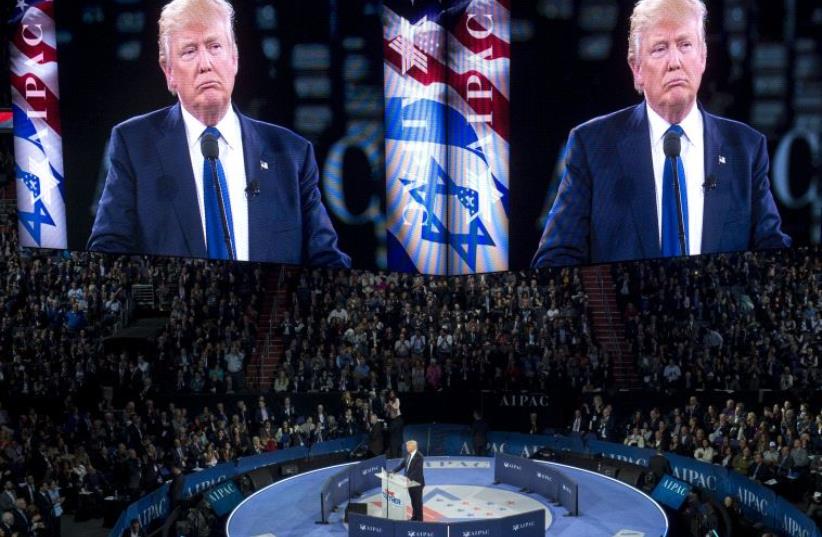 US Republican presidential candidate Donald Trump at the American Israel Public Affairs Committee (AIPAC) 2016 Policy Conference
(photo credit: SAUL LOEB / AFP)
Advertisement
Republican presidential nominee Donald Trump’s “lack of self-restraint and his barrage of ill-informed comments would make an already perilous world even more so.”That is typical of the criticisms of Trump coming from Democrats, only this time, the quote is from a respected Republican member of the Senate, Susan Collins of Maine.Trump, she wrote last week in The Washington Post, “lacks the temperament, self-discipline and judgment required to be president.”John Noonan, a Republican national security expert and former Minuteman III nuclear launch officer, wrote last week in the Los Angeles Times, that Trump cannot be trusted with the war plans and nuclear codes for our nation given the “sociopathic and chronically narcissistic behavior” he has exhibited “throughout his checkered career.”Collins and Noonan are among a growing number of Republicans, conservatives and security experts who recognize the danger that a Trump presidency would mean not only for the United States, but also for parts of the world that rely upon a steady, reliable hand in the White House. Fifty Republican national security experts last week signed a letter warning that Trump “would put at risk our country’s national security and well-being.”Trump has demonstrated time and again that he lacks basic knowledge about our Constitution and rules of governance, and that he is reckless, insecure and unpredictable.Look at his outrageous remark that the “Second Amendment, people” could act against Clinton. Regardless of whether Trump was kidding or simply referring to the strong gun lobby, many interpreted the comment as a dog whistle to gun violence toward Clinton.His careless remarks not only glaringly demonstrate his recklessness and failure to understand the weight his words carry, but also could have deadly consequences.We need a stable and strong leader who understands the power of words, has experience in foreign policy and in dealing with foreign leaders, and who has the temperament to handle crises.We also need a leader who will work proactively with Israel, and continue to ensure that Israel maintains its qualitative military edge.Hillary Clinton is that leader.Trump has said that he will be the “neutral guy” on negotiating a Palestinian-Israel deal, and that a peace deal “will have to do with Israel and whether or not Israel wants to make the deal – whether or not Israel’s willing to sacrifice certain things.” Those are Mr.Trump’s quotes.Clinton recognizes that a peace deal entails compromise, but also has stood fast with Israel for decades. As senator and as secretary of state, she demanded an end to Palestinian incitement, condemned rocket fire into Israel, helped to equip Israel with the F-35 Join Strike Fighter, and pushed for upgraded Patriot missiles and the Iron Dome system.Clinton, who frequently speaks about the unshakable bonds between the US and Israel, has pledged to increase intelligence sharing and to work with Israel to develop better tunnel detection technology to prevent arms smuggling and to boost support for Israel’s missiles and rocket defense system.She has decried anti-Semitism, and has condemned the Boycott, Divestment and Sanctions movement against Israel as an attempt to “isolate and delegitimize Israel” and “counterproductive to the pursuit of peace and harmful to Israelis and Palestinians.”She is experienced in negotiating with foreign leaders. Ambassador to the United States Ron Dermer, who is known to have close relationships with Republicans, credited her with the leading role in the cease-fire that Israel and Hamas reached in 2012. “She came in and had to get it right, and had, I think, basically one shot,” The Jerusalem Post reported Dermer as saying at an event hosted by the S. Daniel Abraham Center for Middle East Peace at the Democratic National Convention in Philadelphia. “A lot of lives were saved,” said Dermer.Clinton was instrumental in getting the United Nations to agree to sanctions on Iran and she has unequivocally pledged to hold Iran to the highest standards to ensure it does not violate the nuclear arms deal signed last year. She has vowed to “vigorously enforce the deal,” saying her approach “will be to distrust and verify.”Unlike Trump, Clinton understands that the US can’t simply rip up deals and start anew if it is going to be respected as a world leader.Clinton’s experience as a senator and as secretary of state has given her a deep understanding of the threats that Israel faces, its security needs and the complexity of the Middle East. She knows the players and recognizes that the “same forces that threaten Israel, threaten the United States.”Supporting Israel and dealing with Middle East politics is not for the uninitiated, temperamental or irrational. Clinton is tested, steady and rational.Ron Klein is a former Democratic member of Congress from Florida and chairman of the Jews for Progress super PAC.