Israel’s 1950s strategy, known as the “periphery doctrine,” was meant to seek allies beyond the hostile Arab world, such as with Iran and Turkey, but now the situation has reversed itself. 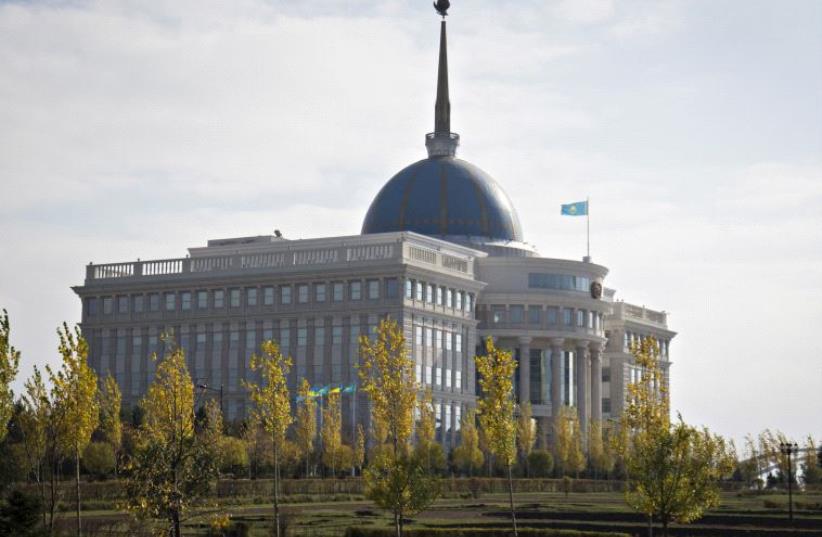 A general view of Akorda, the official residence of Kazakhstan's President, in Astana, Kazakhstan.
(photo credit: REUTERS)
Advertisement
Much has been written about the growing ties between Israel and Arab states, such as Egypt, Jordan, Saudi Arabia, and the United Arab Emirates (UAE), but there is also great potential for stronger relations between Israel and Central Asian countries.The friendly relations between Israel and Central Asian countries go back to their foundation during WWII when the then-Soviet republics hosted an estimated two million refugees from the Nazi German invasion of the USSR – most of them Soviet Jewish refugees during WWII (it is estimated that there were some five million Jews in the Soviet Union in 1941).The quietly improving cooperation between Israel and some Arab Sunni states is due to realpolitik – or national interest – with the Sunnis afraid of the interference of revolutionary Shia Islamic Iran in their affairs. Relations between Israel and Turkey have become increasingly strained due to the Islamist policies of Turkish President Tayyip Erdogan.Relations with Central Asian countries also involve mutual interests; however, they are not beholden to radical religious and cultural factors, as in the Arab world.Israel’s 1950s strategy, known as the “periphery doctrine,” was meant to seek allies beyond the hostile Arab world, such as with Iran and Turkey, but now the situation has reversed itself.The moderate, mostly secular Muslim Central Asian states are also concerned about radical Islamic forces and cooperate with the West to keep extremist groups from gaining a foothold. In this security arena, cooperation with Israel is already taking place and there is room for more. In addition, economic ties could also be strengthened, perhaps with the promotion of free trade agreements.Geopolitically, Central Asian countries border Iran, Russia, China and Afghanistan and could serve Israel’s interest in having access to Tehran.Vadim Altskan, the senior project director of the International Archival Programs at the Mandel Center for Advanced Holocaust Studies at the United States Holocaust Memorial Museum, says that the estimate of two million Jewish refugees were evacuated or fled to the Soviet interior during WWII. This information is based on card catalogue kept by the Russian Red Cross Center for Research and Information in Moscow. He said that outside researchers have also come to a similar figure on their own.Altskan cites research by fellow Israeli US Holocaust Museum researcher Vadim Doubson, who estimates that around 600,000 refugees went to Kazakhstan, with about half being Jewish, and around 500,000 to Uzbekistan with more than half being Jews. These two Central Asian countries accepted the bulk of refugees.Altskan said that there are currently discussions underway regarding the digitization of the Moscow-based archival materials, which would be a boon for further scholarship.All of the five Central Asian countries: Tajikistan, Uzbekistan, Kazakhstan, Turkmenistan and Kyrgyzstan were part of the former Soviet Union until declaring independence in 1991. The Communist Soviet Union persecuted practitioners of any religion, laying the foundation for the largely secular Central Asian countries of today.Many Jews came from the Ukraine, the Baltics, Belarus, and Moldova, escaping East before the invading German Nazi hordes. Jews not living near train stations fled by horse or even by foot.“My family lived in Ukraine and had about three weeks before the Germans came into town,” explained Altskan. They lived about 93 miles from any train station, his great- grandfather fled with his family by horse for several weeks along with the Red Army in full retreat.Altskan’s family ended their perilous and rudimentary journey in a small town in northern Kazakhstan near Astana and worked with locals in agriculture during their stay from 1941 to 1944.“My father said he never felt any antisemitism from the locals, though there were some isolated incidents, mainly because it was war time and there was a shortage of everything,” said Altskan.Most people know little about this chapter of history, and Altskan attributes this to the fact that during Soviet times the Holocaust was not part of the official historiography, as the focus was on defeating the Nazis. It took many years even after these Central Asian countries independence to get access to these Soviet archives.“This is a story of Jewish-Muslim coexistence, which most survivors describe as a positive experience,” explained Altskan. This shared history between Central Asian countries and Israel aides in the effort to improve relations even more.Another key factor is the perception in these countries that Israel carries influence with Washington, and particularly now, with the close ties between the Trump administration and Prime Minister Benjamin Netanyahu.From the humane treatment of the Jewish refugees in World War II, the cooperation between Central Asian countries and the Jewish people, Israel included, is developing in science, business, education and security – to the benefit of both sides.The author is the deputy online editor at JNS.org and a writer on Middle East affairs. He covered the Middle East for The Jerusalem Post and is now writing a PhD dissertation at Bar-Ilan University on the Islamic Movement in Israel. Twitter at @Arielbensolomon