There are those frustrated with the growing nationalism and extremism within Israeli society who pin their hopes on the involvement of the international community. 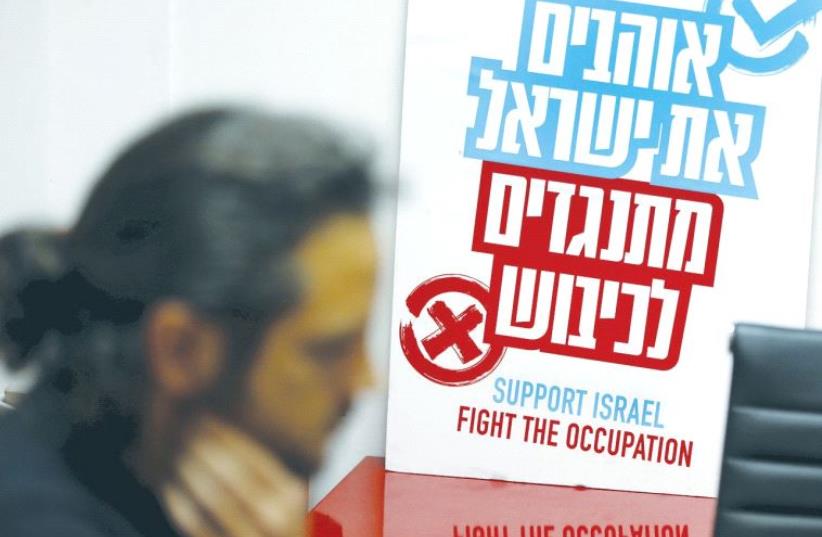 IF YOU love Israel, oppose the occupation, says a poster of an Israeli peace organization
(photo credit: REUTERS)
Advertisement
Last year I conducted research on the impact of the local human rights community. I compiled a list of policy changes that improved human rights and then asked what we can learn from these achievements. What is the toolbox that successfully makes change? Perhaps the clearest lesson that emerged from this exercise is that change is almost always the result of a combination of domestic and international efforts.There are those frustrated with the growing nationalism and extremism within Israeli society who pin their hopes on the involvement of the international community, and there are those leery of “airing Israel’s dirty laundry abroad” who think only domestic advocacy is legitimate.Experience shows that neither approach alone will be successful.I was reminded of this research when I saw the criticism of a new initiative I head. SISO: Save Israel Stop Occupation aims to build a partnership of Israelis and Diaspora Jews who understand the dangers of our military rule over the Palestinians and are working to end it. Our first activity was a call from many of Israeli’s leading public figures asking Jews around the world to work with us to end the occupation.“You’d think that if people in Israel wanted to change Israel’s policies, the correct address might be the Israeli government,” Seth Frantzman wrote in response. “But in the eyes of large numbers of Israel’s intellectual class, the best way to ‘solve’ problems in Israel – that are largely of Israel’s own making – is to beg people from Los Angeles, New York and London to do it.”There is no doubt that the primary address for a diplomatic agreement to end the occupation is the Israeli government (and the Palestinian leadership as Frantzman rightly points out). Reaching such an agreement requires strengthening the domestic Israeli constituency that will push the government in this direction. SISO has built a platform of 30 Israeli organizations committed to showing Israelis the price we pay for our rule over the Palestinians: the economic cost, the military cost, the harm to Israeli democracy, the threat to our personal safety and what it means for the parents of every child drafted into the Israeli military. Most Israelis recognize the hardships for Palestinians, yet are not aware of all the ways we also pay a price. This 50th year since 1967 is an opportunity to shake Israelis out of their complacency and show that this reality is not set in stone. We can build a better future.And SISO is also bringing this message to the Jewish Diaspora, which is involved in so many aspects of Israel, from promoting social welfare to affecting the political process.A recent public opinion survey highlights the relevance of this work. Israeli Jews overwhelmingly agree that Jews in the Diaspora bear responsibility for the State of Israel (78 percent). They also believe the reverse, that the State of Israel bears responsibility for the fate of Jews around the world (75.7%). When asked whether and how Israel’s rule over the Palestinians affects the fate of Diaspora Jews, Israeli Jews (66.8%) overwhelmingly felt that the effect was negative.No one raises an eyebrow when Israelis ask Diaspora Jews to work against the US deal with Iran, or to lobby the US for a larger military aid package, or to work against European measures to distinguish between products from Israel and from the settlements. No one questions the legitimacy of these activities, which some Jews see as advancing Israel’s interests.What then of Jews who are convinced that ending the occupation is a vital Israeli interest? For many of us, Israeli military rule over the Palestinians endangers the country’s security and well-being.Some have even argued it constitutes an existential threat to Israel.Israelis who hold this view must mobilize domestic Israeli constituencies to work against the occupation. And we must also unite with Diaspora Jews who see the dangers of occupation and want to work with us to make change.Not only is such organizing legitimate – it is essential.The author is founding director of SISO (siso.org.il).