Israel’s trees: Cause for celebration and optimism

So as we enjoy our delicious fruits this Tu Bishvat, let us not only give thanks for the delicious vegetation of the Land of Israel. 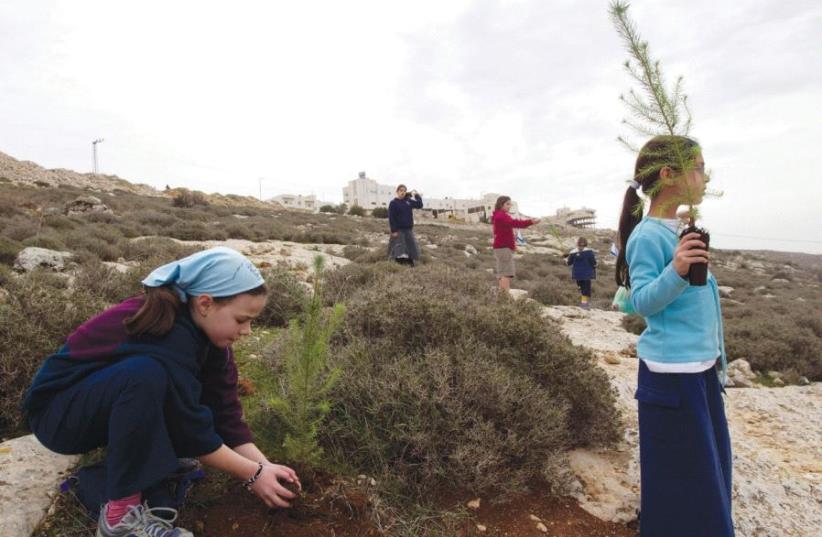 A GIRL plants a seedling outside the West Bank settlement of Kiryat Arba ahead of Tu Bishvat
(photo credit: REUTERS)
Advertisement
The fifteenth of the Hebrew month Shvat, known as Tu Bishvat, is a mysterious holiday. In Talmudic times it wasn’t a holiday at all – it was nothing more than a technical date related to the tithing of fruits. Sources giving mystical significance to the day only emerged in the 16th century, and festive meals developed celebrating the deeper messages we learn from various fruits. But in the modern State of Israel, this day when we focus on agriculture and the trees of the Land of Israel teaches a message of supreme importance – a message worthy of great celebration.The Bible foretold that when the Jewish people would dwell in exile, Israel would remain a wasteland: “I will make the land desolate; and your foes who dwell upon it will be desolate.” (Leviticus 26:32) And sure enough, that is exactly what happened. The greatest conquerors desired this land for trade and military purposes, but when they arrived they found swamps and marshland.They attempted to grow things, but failed.Mark Twain visited Israel in 1867, and reported the following in Innocents Abroad: “A desolate country whose soil is rich enough, but is given over wholly to weeds... a silent mournful expanse.... a desolation.... hardly a tree or shrub anywhere. Even the olive tree and the cactus, those fast friends of a worthless soil, had almost deserted the country.”But the land was not destined to remain that way forever. The Prophet Ezekiel taught that the land would begin to flourish again in preparation for the return of the Jewish people to Israel: “But you, O mountains of Israel, will give forth your branch and bear your fruit for My people Israel, for they are soon to come.” (Ezekiel 36:8) The Prophet Isaiah foretold that this re-flourishing would be part of the comforting process from the suffering and mourning of exile: “For the Lord will comfort Zion... He will make her wilderness like Eden and her wasteland like a garden of Hashem...” (Isaiah 51:3) The Prophet Amos explained that this rejuvenation of the land wouldn’t happen magically, but would take place as a result of the efforts of the returning Jewish people: “Behold, days are coming – the word of the Lord…I will return the captivity of My people Israel, and they will rebuild desolate cities and settle them; they will plant vineyards and drink their wine; they will cultivate gardens and eat their fruits.” (Amos 9:13-15) The Bible made it crystal clear: The Land of Israel would remain desolate while the Jewish people suffers in exile, and the re-flourishing of the land would accompany our return, signaling redemption.This biblical theme continues in the teachings of the Talmudic era. Rabbi Abba declared in Tractate Sanhedrin that the clearest sign of the redemption of the Jewish people is the trees of the land of Israel growing again. (98a) Tractate Megilla notes that in the daily prayers we ask for rain to enable the fruits of Israel to grow, followed by a prayer for the ingathering of the exiles.The Talmud explains that this teaches that the re-flourishing of the land of Israel is an integral part of the redemption process.These teachings provide an entirely new perspective regarding Tu Bishvat for those who are blessed to call Israel our home, beyond the joy of the fruits themselves. Yes, we celebrate the incredible fruits, vegetables, flowers, and trees of Israel with festive seders and other cultural events. But we can now celebrate what the growth of these trees represent: that we are experiencing redemption. Or, as both the religious Zionist and ultra-Orthodox rabbis called it when the state was founded: reisheet tzmichat geulataynu, the beginning of the flourishing of our redemption.Recognition of that re-flourishing, proof that we are living through redemption, should not only fill us with the joy and be cause for celebration on Tu Bishvat, but should also impact our attitude toward our country today, as it confronts many security and domestic challenges. There is no room for pessimism. We must continue to remind ourselves that we live in the best of times, and that we are experiencing redemption.Let me explain what I mean by no pessimism: The New England Patriots were losing the Super Bowl on Sunday 21-3 at halftime.But the players reported that there was no screaming or sense of panic in the locker room. They worked on adjustments and down 25 points with 21 minutes to the game, – with less than a 1% chance of winning – they continued to believe that they could win, as wide receiver Julian Edelman said after the game. And quite remarkably, they did win, 34-28.If attitude makes such a big difference in the world of sports, all the more so when it comes to the miraculous return and flourishing of the Jewish people in its ancestral homeland, where other forces are clearly at work. We in Israel have to believe in ourselves. If something is wrong with the way things are going in this country, we cannot allow ourselves to be discouraged and give up.So as we enjoy our delicious fruits this Tu Bishvat, let us not only give thanks for the delicious vegetation of the Land of Israel, but also celebrate and reflect upon what these fruits represent – the reality that we are experiencing redemption after wandering for 2,000 years, and a deep belief that we are blessed to live in Israel in the best of times, when anything is possible. And may that recognition motivate each and every one of us to roll up our sleeves and play our role in bringing us ever closer to the final redemption, including resolving our internal struggles and gaining peace in our land.Tu Bishvat is celebrated tomorrow, Saturday, February 10.The writer served in the 19th Knesset with the Yesh Atid Party.