It takes a Judas to know one

From the BBC’s point of view, having Israeli literature’s crown jewel provide a stamp of approval for its own dim view of the Jewish state is an opportunity not to be missed or squandered. 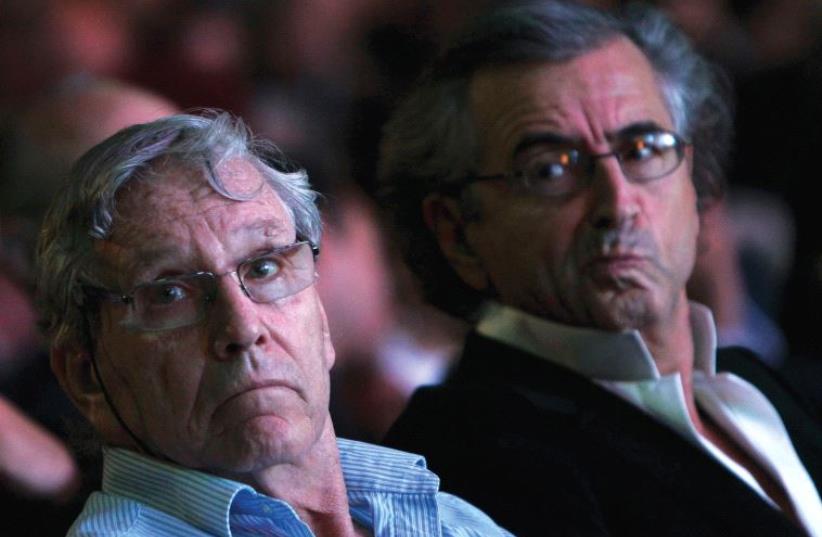 ISRAELI NOVELIST Amos Oz sits next to French philosopher Bernard Henri Levy
(photo credit: REUTERS)
Advertisement
On Tuesday night, the person touted as “Israel’s most famous living author” appeared on the BBC to promote his latest book. In the course of his interview with Newsnight host Kirsty Wark, Amos Oz engaged in his second favorite activity (after receiving international awards and having his novels turned into movies starring the likes of Natalie Portman): he slammed the nation of his birth, which turned him into a cultural icon.To be fair to Oz, bashing the Jewish state that he represents with such panache is key to his success abroad. Talent is a factor, of course, but it is neither sufficient nor a prerequisite to inspiring adoration among the literati and political elites.Indeed, had he not been the darling of the Left, the odds are slim that Oz would have been invited by the UK network to discuss Judas, his take on the famous traitor whose story constituted the “Chernobyl of Western anti-Semitism for 2,000 years,” and the basis for “pogroms, inquisitions, persecutions and the Holocaust.”From the BBC’s point of view, having Israeli literature’s crown jewel provide a stamp of approval for its own dim view of the Jewish state is an opportunity not to be missed or squandered.Nor does any topic segue better into what Wark was really after than “persecution.”With virtuosity born of brilliance, Oz managed to go above and beyond the call of duty – “defending” his homeland by likening it to the worst of evil regimes.“If people call Israel nasty, I to some degree agree,” he said. “If people call Israel the devil incarnate, I think they are obsessed; they are mad. But this is still legitimate. But if they carry on saying that therefore there should be no Israel, that’s where anti-Zionism becomes anti-Semitism, because none of them ever said after Hitler that Germany should cease to exist, or after Stalin that there should be no Russia.”Oz pulled a similar stunt when explaining his opposition to the boycott, divestment and sanctions movement. It is wrong, he said, “because it hardens the Israeli resistance, and deepens the Israeli paranoia that the whole world is [and] always has been against us, [as if to say]: ‘They [the boycotters] don’t even discriminate between one Israeli and the next; they boycott all of us, and whatever we do, they are going to hate us, so let’s be bad guys for a change.’” Furthermore, he added, just because boycotts were effective in the case of South Africa, “You have to be very stupid to think the prescription, the medicine, that worked very well against cholera will also kill the plague. This is a kind of mental laziness.”Oz then went on to equate Palestinian terrorism with Israel’s response to it: “There are many, many people in... Europe who have a very soft spot for the Third World, saying, ‘Well those people have suffered a lot; you have to understand, it is only natural they are violent. [But] when it comes to the Jews, they often say: ‘Well, they have suffered so much, how can they be violent after such an experience?’” Nobody, Oz concluded, should be “100 percent pro-Israel or 100% pro-Palestine.” Everyone needs to “grasp the complexity and ambivalence of the clash between right and right, and sometimes between wrong and wrong.”Oz’s display was disgusting, plain and simple. Nothing new there. But the way his interview is being reported by one media outlet after the other is equally disturbing. Somehow, the main message that has been plucked from his vile pontification was his acknowledgment that the denial of Israel’s right to exist – or claim that it shouldn’t have been established in the first place – “crosses the line from anti-Zionism to anti-Semitism.” Wow.There are two possible reasons for this travesty. One is that a famous leftist like Oz is assumed to be so hostile to Israel that any scrap of recognition he bestows on it makes headlines. The other is that nobody, other than his BBC host, actually listened to, heard or understood what Oz said. Either reflects a very sorry state of affairs.What I, for one, have to say about Oz’s book on Judas is that it takes one to know one.The writer is the managing editor of The Algemeiner.