It’s pride vs. reason with Iran nuclear talks due to end

In the little over a day left in the negotiations, everything is open and anything could happen, including a major fiasco and blowup. 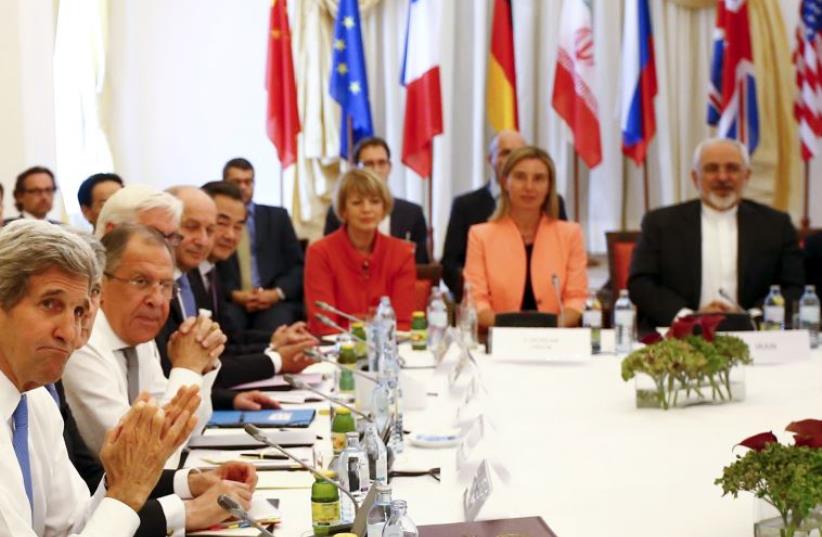 Negotiators wait for photographers during a meeting at the hotel where the Iran nuclear talks are being held in Vienna, Austria July 6, 2015.
(photo credit: REUTERS)
Advertisement
American officials told reporters in Vienna that Friday is the deadline for reaching a nuclear deal, while sources within the EU’s delegation expressed disappointment in Iran’s inability to reach a decision, and in its ongoing attempts to obtain last minute concessions.The American officials made it clear that “there is no point in a deal if it is not a good deal.” The German foreign minister emphasized that countries have lost trust in Iran, and therefore Iran must regain that trust by allowing firm inspection of its nuclear facilities.In the event that an agreement is not be reached by Friday in spite of the deadline being pushed back twice, the negotiations will be postponed by at least two months, due in part to summer vacations, the US congressional recess and mainly because of the legislation which grants Congress 60 days to review any deal before signing.Meanwhile, the Iranian representatives to the talks continue to leak information to the Iranian press in which they claim that the negotiations are progressing and the gaps have become smaller. “We have made positive proposals,” the Iranian officials said.
Iran and the six world powers are still in disagreement over some central issues, most important supervision of Iran’s nuclear activity. The world powers are demanding intrusive supervision, which will allow IAEA inspectors’ access to all nuclear facilities, including military bases in which there is suspected nuclear activity.
Jpost reporter in Vienna answers readers" questions on Iran talks
Additional unresolved issues are when and under which circumstances will sanctions be removed, and whether sanctions regarding nonnuclear issues such as the prohibition on trade in arms, will be removed as well. Tehran is supported by Russia and China regarding this issue, as they see potential in Iran’s large arm’s market.To Tehran’s displeasure, it has already been decided – though it continues to appeal the decision – that in the event violations by Iran are discovered, the P5+1 world powers (the United States, Britain, France, Russia, China and Germany) are allowed to reimpose sanctions immediately, if there is a majority within the group, without having to go through a vote in the UN Security Council. This decision is important since the Western powers have the majority in the P5+1, whereas in the UN Security Council, China or Russia could veto such a move.A knowledgeable source said that rationally, a deal will be reached because it is within Iran’s interest to have sanctions removed. Iran wants to return approximately $100 billion to its national coffer,  which is frozen in banks around the world. Additionally, it wants regain lost oil sales, which have cost the Islamic Republic an estimated $160b. since 2012 alone.Iran needs this deal more than the United States. Barack Obama, who made this accord an important goal in his foreign policy, will at the least be able to say, “I tried, Iran is to be blamed for the failure.” The source added, “In spite of this clear rationale which is understood by all sides, the talks with Iran make it apparent that the regime still holds high considerations such as national pride, dignity, and fear of radicals who oppose the deal, saying that the Iranian representatives sold out the values of the Islamic revolution. In the little over a day left for the talks, everything is open and anything could happen, including a major fiasco and blowup.”