Some papers in this country lean to the far left, others to the far right. But in The Jerusalem Post, we report the news as straight as possible and in a way that is a rare commodity these days. 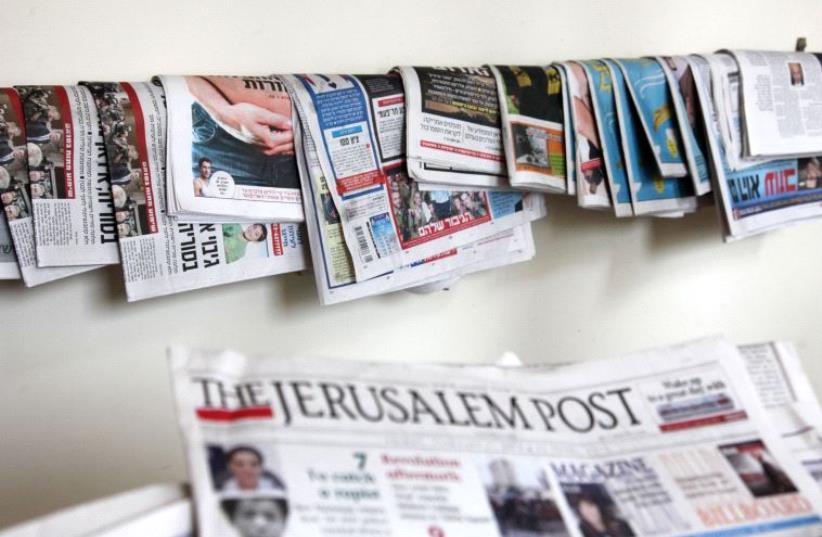 The Jerusalem Post
(photo credit: MARC ISRAEL SELLEM/THE JERUSALEM POST)
Advertisement
The beauty of the Twitterverse. On Tuesday, American journalist Jeffrey Goldberg took to social media in attack mode.First in line was Haaretz, which The Atlantic national correspondent tweeted – to his 106,000 followers – he was ready to stop reading due to its “cartoonish anti-Israelism and anti-Semitism.”Next was this newspaper, The Jerusalem Post. “For those who are asking – in English, I find the @TimesofIsrael to be very reliable. Haaretz has some good reporters. JPost is nuts.”My response, also on Twitter, was the following: “If ‘nuts’ means being a Zionist newspaper w/ objective news & balanced oped from across political spectrum, then thanks.”But when pushed, Goldberg could cite only one example of someone he thought was “nuts” who wrote for the Post. That didn’t stop him from accusing the Post and Haaretz of spreading “Sinat Hinam,” baseless hatred. Why? He claimed that this paper criticized him in the past. Apparently criticism is defined by Goldberg as hatred.Jeffrey, let me take this opportunity to reintroduce you to The Jerusalem Post. I know that you used to write a column here some years ago when you lived in Israel, but it could be that you have forgotten what we do here and what it means to be a daily newspaper in the Jewish state.Since its beginning 84 years ago, The Jerusalem Post has been a unique paper on the Israeli journalism landscape. We write in English in a Hebrew-speaking country. While we still put out a daily paper for our readers in Israel, in today’s digital age, we are mostly read by millions from across the globe. For them, we serve as a window to Israel, presenting the country’s challenges, accomplishments and failures.We do this by sticking to our principles and by providing balanced reporting, thought-provoking analysis and hard-hitting commentary.Our amazing reporting staff – one of the best in the country - breaks news daily. It could be a story like Herb Keinon’s piece this past weekend on Yitzhak Molcho, Prime Minister Benjamin Netanyahu’s secretive diplomatic envoy, or the story by Adam Rasgon on the anniversary of the Jewish terrorist attack last year in Duma which left six-year-old Ahmad Dawabsha injured and an orphan.Our news coverage is as objective as you will find. Some papers in this country lean to the far left, others to the far right. But in The Jerusalem Post, we report the news as straight as possible and in a way that is a rare commodity these days.In our opinion pages, which you claimed are not balanced, we run approximately six op-eds a day from across the political spectrum. We have Caroline Glick on the Right and others, like Gershon Baskin, on the Left.When London elected its first Muslim mayor in May, we ran an op-ed by Sadiq Khan in these pages. Shimon Peres recently published an op-ed here and we regularly run columns by Jeff Barak, one of my predecessors who can hardly be accused of being on the same political side as Caroline.Jeffrey, as a former staffer, you should know that despite political upheaval in Israel, our editorial line has remained steadfast.We have supported a territorial compromise in the framework of a peace deal with the Palestinians, but only if it is a genuine and lasting peace with a real and complete end to violence and incitement.The Jerusalem Post editorial board backed the disengagement from the Gaza Strip in 2005 but fully supports Israel’s right to defend itself with force against attacks from Gaza or the West Bank. We have criticized the Netanyahu government of not doing enough to advance peace and the Obama administration for making mistakes along the way. Most recently, we called for full recognition of Reform and Conservative Jews in Israel, which we contend, is a state that belongs to all Jews and not just the Orthodox. So Jeffrey, in short, I’m not sure what you think is nuts. But you should know one thing - it’s definitely not this newspaper.