There is nothing France could have done – aside from ceasing to be France – to prevent the attack. 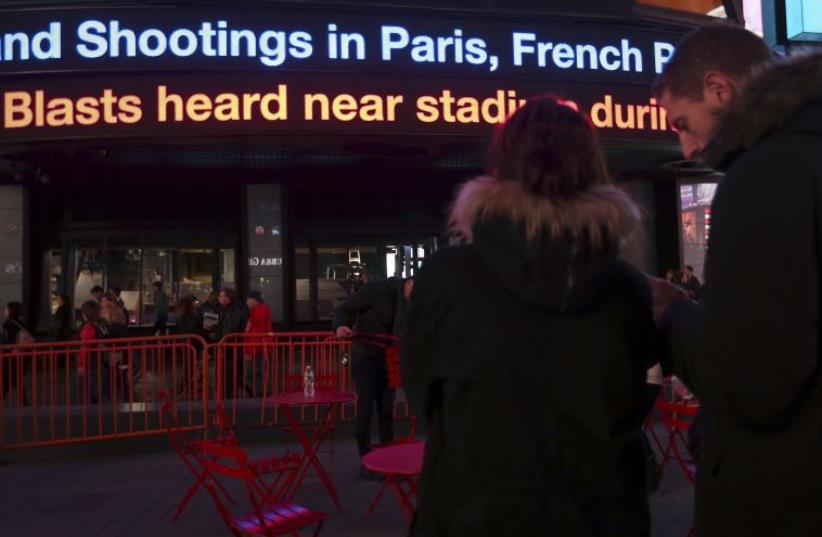 People watch as a news ticker updates people with the news of the shooting attacks in Paris, in Times Square in the Manhattan borough of New York November 13, 2015
(photo credit: REUTERS)
Advertisement
It is only natural to search for motives behind human actions. And the same applies to Islamic terrorism.But sometimes the only motive is a nihilistic urge for destruction.Last January’s massacres at the offices of Charlie Hebdo and the Hyper Cacher supermarket in Paris, for instance, cannot and must not be blamed on France’s policies related to the banlieues, the suburban, low-income housing projects inhabited disproportionately by Muslim immigrants.Nor must we allow ourselves to blame the French satirists at Charlie Hebdo for overstepping the bounds of good taste. They are not responsible for the murderous attack perpetrated by Islamist extremists.Similarly, the terrorists acting in the name of a distorted interpretation of Islam who carried out the despicable shootings and suicide bombings that left 129 dead and 352 wounded in Paris on Friday evening must not be explained as a consequence of France’s involvement in the war on Islamic State in Iraq and Syria.There is nothing France could have done – aside from ceasing to be France – to prevent the attack.We must tear ourselves away from any attempts to find a logical motive behind Islamist terrorism.The socioeconomic argument of alienation and poverty does not provide an explanation. While it is true that anti-Semitism is rampant in the banlieues of France, the profiles of French jihadists simply do not track closely with class.In fact, many of the French Muslims going to Syria are middle-class youths, some of them European converts to Islam. These are people who received the benefits of French society and education and have reciprocated France’s generosity with murderous violence.Amedy Coulibaly, the terrorist who carried out the massacre at the Hyper Cacher, had ties with Mohamed and Mehdi Belhoucine. Both were excellent students – Mohamed had done advanced studies in mine engineering, Mehdi in electronic mechanics – and were from a middle-class family who lived in a private house. Both are now reportedly in Syria fighting with Islamic State.A similar case can be made regarding Palestinian terrorism, which has little to do with the “occupation” and a lot to do with indoctrination. The “occupation” did not lead to the murder of Ya’akov Litman and his son Netanel near Otniel on the same day as the attacks in Paris. It was the result of a conscious act by an Islamist murderer.The terrorists who indiscriminately massacred innocent Parisians on Friday are seeking specific concessions. But France cannot cave in to these demands. Muslim zealots want to establish a medieval caliphate in place of France’s famed democracy. The liberty, equality and fraternity that protect the artistic expression of publications such as Charlie Hebdo or performers such as the Eagles of Death Metal offend the zealots. But France would cease to be France if it abandoned these principles to appease them.Applying similar logic to the Israeli-Palestinian conflict would result in equally ridiculous conclusions. Palestinians are angry because their repeated attempts – aided by the combined armies of Arab countries or via terrorism – to destroy the Jewish state have failed. But if Israel were to give the Palestinians what they want, Israel would cease to exist as a Jewish state: The “right of return” for millions of Palestinians would endanger the Jewish majority within the pre-1967 lines; a hostile Palestinian state would be established along difficult-to-defend borders that would enable West Bank Palestinians to continue their terrorist attacks as Hamas has done from the Gaza Strip, which Israel evacuated in 2005.As Prime Minister Benjamin Netanyahu pointed out, there is a common thread connecting the horrific attacks in Paris to Israel’s fight against Islamic terrorism.“I expect [international] support for Israel when it fights terrorism,” Netanyahu said after the Paris attacks. “Just as Israel supports France and other countries.... You can’t say these are the good terrorists and these are the bad terrorists.All terrorists are bad.”There can be no compromise with the likes of ISIS, Hamas or Hezbollah, because compromise means forfeiting the freedoms that make life worth living. The only choice is to fight.