The current story begins with the investigation of a few Jewish teens who allegedly threw stones on a Friday night during the late summer. 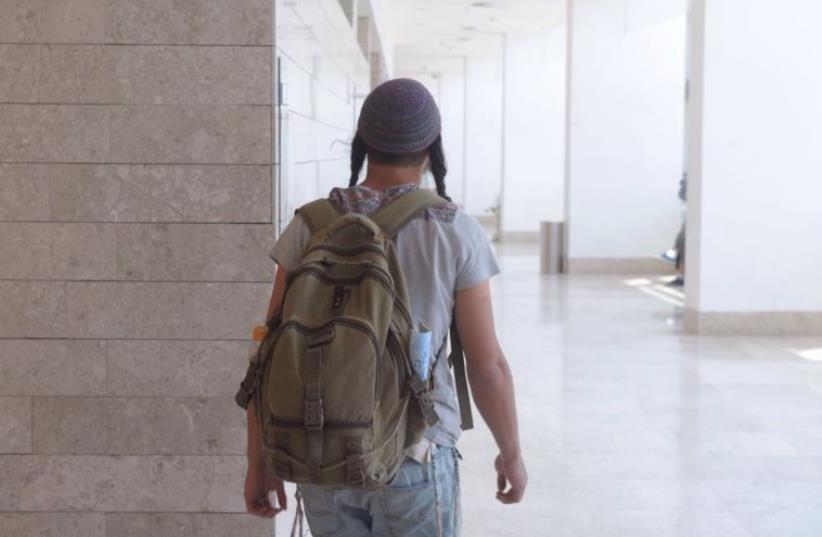 An indictment hearing was held at the Lod District Court for memebers of a suspected Jewish terror cell, April 25, 2016
(photo credit: AVSHALOM SASSONI)
Advertisement
‘Jewish terrorists!” The words leap out at you like a wild animal, devouring your sense of normality and faith. It is frightening to think of what this means. But is it true? Is petty vandalism “terrorism?” How serious is the problem, and how widespread is it? The source for this charge is a branch of the Shin Bet (Israel Security Agency) – the Jewish section of the secretive security services, the GSS – which reports directly to the prime minister. Twenty-five years ago this section organized a fake “Jewish terrorist” group prior to Yitzhak Rabin’s assassination. Is what’s happening now more of the same? The current story begins with the investigation of a few Jewish teens who allegedly threw stones on a Friday night during the late summer and which allegedly resulted in the death of an Arab woman who was in a car driven by her husband. There were no immediate arrests, but as the issue remained unsolved the Shin Bet was under pressure for an arrest and conviction. Arrests were made and the court issued a “gag order” preventing any information on the individuals who were arrested, the tactics used to force confessions and limit refusal to cooperate, and any evidence of criminal activity. Leaks from the Shin Bet to the media suggested a network of “Jewish terrorists” identified as being part of a large group of idealistic young people called the “Hilltop Youth” (Noar Hagva’ot).According to the Shin Bet and police, some members of this group were involved in minor vandalism (graffiti, slashed tires, uprooted olive trees, etc.) and stone-throwing. But terrorism, by definition, depends on motivation and intent.  The Hilltop Youth also spearheaded resistance to the uprooting of Jewish communities and the destruction of Jewish homes in Judea and Samaria. They have also built tiny enclaves near or in established Jewish communities in Judea and Samaria. The Shin Bet and police have gone after them with a vengeance. Led by the Shin Bet, the State Prosecutor’s Office, the Civil Administration and backed by the courts, the Hilltop Youth have been a constant target for the authorities, leftist organizations and politicians, and, of course, the media. Then, recently, in an unprecedented action, the Shin Bet attacked and threatened to arrest the entire Pri Haaretz yeshiva in Rehalim where the accused youths attended. A desecrated Israeli flag was “discovered,” although no one claimed it. Was this a GSS trick? Was there a provocateur? Were students being encouraged to break the law? The Shin Bet investigations yielded no information. Denied civil and humanitarian rights and in violation of the norms of due process, some students were coerced into confessions, which were rejected by the court. Apparently, the Shin Bet did not respect the basic law that individuals cannot be compelled to testify against themselves. All except one of the students were released, indicating that there was no basis for arrests in the first place. This has all the markings of a witch hunt. The purpose seems to be to turn public opinion against the Hilltop Youth and support a policy of eliminating them. Hysterically calling out “Jewish terrorism” without any evidence is simply an attempt to justify illegal methods of interrogation in order to extract confessions and vilify a group of young people – not to achieve justice or prevent violence. There was no “ticking-bomb” – except in the heads of the Shin Bet. Young Jews were held in prison for long periods of time – most of it in solitary confinement – because they were “suspected” of a crime, not because they had done anything illegal. With two exceptions, they were punished and then released without any charges.  In the context of hundreds of attacks on Jews by Arabs every day, none of which have been called “terrorism,” accusing young Jews of terrorism and calling them “anti-Zionists” without any evidence is a clear display of a lynch-mob mentality. It is an example of the betrayal by agencies of the state which they – and many others – feel deeply and ponder. Rather than explain the problem, the media seeks to defend the Shin Bet and its illegal tactics. Honenu, the only civil rights organization defending the accused, is ignored by the media.  Because the Shin Bet is considered vital to security, its exceptional police powers are sanctioned by the state and its actions are not subject to normal rules of conduct or review. Accusations of “Jewish terrorism,” therefore, without any basis, are not only an abuse of the police and judicial system, it is a threat to our society. Fair and accurate reporting by the media is essential to protecting citizens against that abuse. That is the meaning of democracy.  The author is a PhD historian, writer and journalist living in Israel.