Jewish values are to welcome strangers, something Trump doesn't stand for 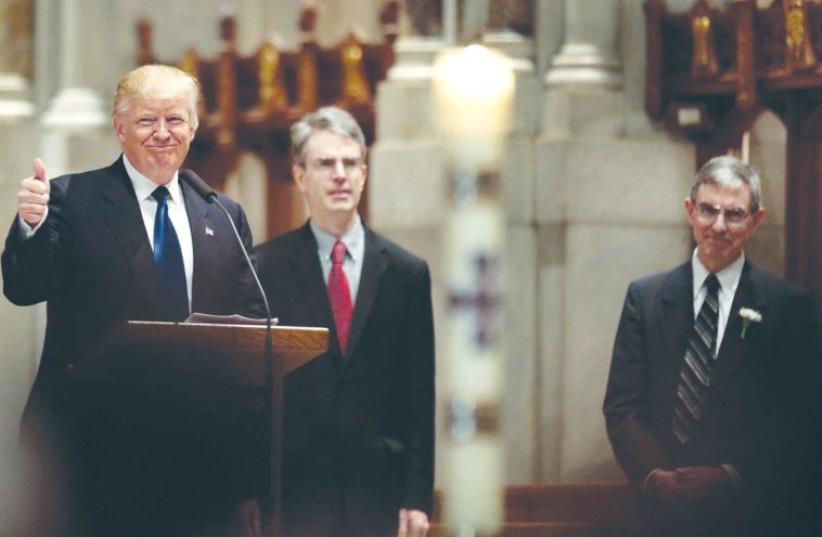 DONALD TRUMP speaks before the funeral for Eagle Forum founder Phyllis Schlafly at Cathedral Basilica in St. Louis. (
(photo credit: REUTERS)
Advertisement
I am the proud, Jewish grandson of immigrants from Gwozdziec, Poland and Hvizdets, Poland (now Ukraine).Growing up, I have fond memories of family meals listening to my grandparents tell me stories about how they had to work hard every day after immigrating to the United States in order to give my parents and me better lives than the ones they left behind in the shtetls of 19th century Eastern Europe.My grandma Esther left Gwozdziec as a young teenager with her father, Mendel, before the First World War and lived for a few years with Mendel’s sister in Buenos Aires, awaiting immigration status before coming to the US.This story is hardly unique to the American Jewish community or my family. In 2013, Pew reported that of the 235 million US adults over 18, 16 percent were immigrants and another 8% had at least one immigrant parent. Countless numbers of Americans have immigrant grandparents, great-grandparents or great-great-grandparents who courageously left their homes, often forcibly, in search of a better life. For American Jews, it’s nearly all of us.Israel, the successful startup nation and still a young country, was built on the power of immigrants, and Judaism places a high priority on welcoming the stranger, an imperative so important that the Torah states it no fewer than 36 times. This Jewish value is also reflected in the founding of our country – the original country built by immigrants – as a welcoming place for those seeking a better life for themselves and their families.Donald Trump does not reflect this value. And, despite claims that he’s softening his stance on immigrants, in reality he’s doing no such thing. Encouraging hatred and fear, Trump has instead recommitted to his hard line on immigration, erroneously painting the majority of immigrants as criminals to be feared, rather than as adding to the American mosaic.He continues to demonstrate zero tolerance for anyone who entered the country without proper documentation, including those who came as young children. With shades of the disgraced “Operation Wetback” of the 1950s, he is calling for the mass deportation of every single undocumented individual and family.Not surprisingly, Trump drew the praise of nativists and the likes of David Duke while alienating and disappointing his own Hispanic supporters. Alfonso Aguilar with- drew from Trump’s National Hispanic Advisory Council following last week’s supposed policy address in Phoenix, saying he was “totally disappointed” by the campaign, which claimed that Trump was softening his stance on immigration. Aguilar told CNN that the plan that Trump described last week “even worse than what he initially proposed,” with nothing about it “compassionate and humane.”Also resigning was Jacob Monty, who following Trump’s speech wrote on Facebook, “Tonight he was not a Republican but a populist, modern day Father [Charles] Coughlin who demonized immigrants.” Other former Hispanic Trump supporters joined them.The steps that Trump outlined in that speech are chilling and cold-hearted, and his “facts” behind them range from overstatements and generalities to outright falsehoods. Mexico will pay for the wall? Mere hours after Trump left Mexico City, Mexican President Enrique Peña Nieto went on television and said, “I was very clear and emphatic that Mexico would not pay for the wall.”His plan, in which he stated, “Any - one who has entered the United States illegally is subject to deportation,” could affect more than half of all those whose status is in question, according to a thorough analysis by The Washington Post . Think about that for a second – six million people. That includes expelling immigrants who came to America as young children, and grew up here.Trump’s “special deportation task force” feeds into fear-mongering, and his vow to screen immigrants for the “likelihood of success in US society” is the antithesis of our nation’s history as a place of welcome to the downtrodden.And true to form, Trump also said he’d like to deport his opponent, Hillary Clinton.Trump frightens me both as a Jew and as an American. As a Jew, I worry, in part, about the anti-Semites his policies encourage; as an American I worry that he has such limited knowledge of our Constitution and that his immigration policies are unrealistic and costly at best, heartless and dangerous at worst. I worry about a candidate, embraced by ardent racists, who would subject those wishing to immigrate to an “ideological certification to make sure that they share our values and love our people.”Just what values are those, Mr. Trump? The ones that allow you to question a respected judge’s partiality because of his family back - ground, that allow you to mock someone with a disability, to denigrate a respected US senator and war hero by saying “I like people who weren’t captured,” to call for a “total and complete shutdown of Muslims entering the United States”? Those certainly aren’t my values, nor do I believe they are the values of most Americans.Hillary Clinton, on the other hand, does represent my values – our values – and has presented a coherent immigration reform policy. She would offer a path to citizenship for most immigrants, keeping in place President Barack Obama’s executive orders allowing children without documentation to continue their education and their families to remain. And she will continue her long-held commitment to fight for comprehensive immigration reform.Let’s vote for leadership, steadiness and, most of all, sanity. Donald Trump does not represent American values and he certainly does not represent Jewish values.We are all immigrants.

The writer is treasurer of Jews for Progress, a pro-Hillary Clinton super PAC, and a member of the Conference of Presidents of Major American Jewish Organizations.
Advertisement
Subscribe for our daily newsletter