Jews should stand in solidarity with the persecuted Hindus of Bangladesh

As Jews, we have an obligation to stand by the Hindus of Bangladesh during their hour of need 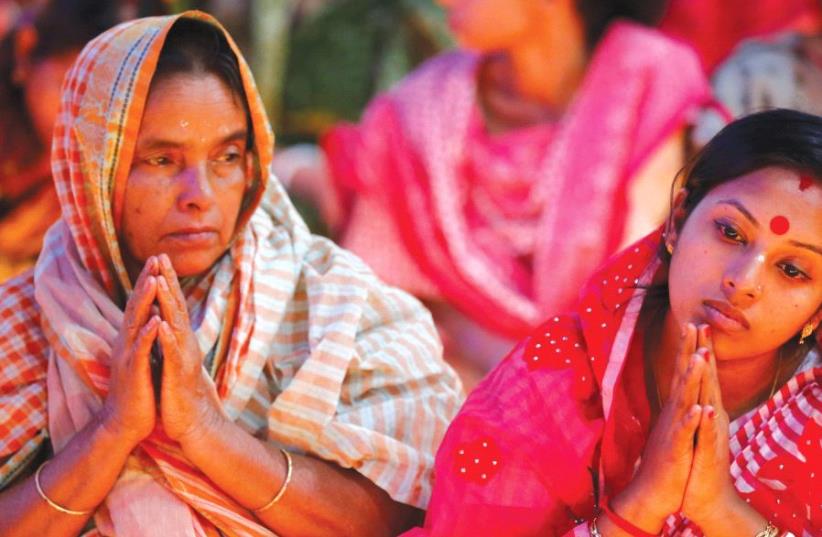 HINDU DEVOTEES sit together on the floor of a temple to observe Rakher Upabash for the last day, in Dhaka, B
(photo credit: REUTERS)
Advertisement
Throughout history, there are many parallels between the persecution experienced by the Jewish People and the plight of Hindus in Islamic lands, which highlights the moral imperative of both communities uniting to fight against their common oppressors. Both Jews and Hindus are part of ancient faiths that have stood the test of time, and the peoples of both faiths are known for their intellectual achievements. Yet at the same time, in the Islamic world, Jews historically have been treated as dhimmis (a protected minority who paid a poll tax in exchange for religious freedom), which made them second-class citizens. In some areas of the Islamic world, the dhimmi laws were less enforced. Under the Almohads of Spain and in Mashhad, Iran, the Jews were not permitted to practice their faith despite their dhimmi status under Islam and many Jews were massacred.In the medieval period, Muslims massacred, enslaved and forcefully converted many Hindus, viewing them to be polytheists who don’t have a right to exist under Islamic law. However, some Muslim rulers under the Mughal Empire followed the Hanafi school of Islamic law, which treated the Hindus as dhimmis as well. Nevertheless, state-sponsored violence against Hindus existed under the Mughals and other Islamic rulers despite this. Given this, the Hindu and Jewish People today have the roots to create a bond based upon their joint history of suffering in the Islamic world. Like the antisemitism in the Islamic world today, whose roots date back to Islamic idea that Jews should be treated as dhimmis, the history of Hindus being persecuted by Muslims is what helped to shape the present plight of Hindus in Bangladesh, where Hindus face brutal discrimination today.Shipan Kumer Basu, the head of the Hindu Struggle Committee, stressed that Prime Minister of Bangladesh Sheikh Hasina Wazed’s government has been using Islamic State (ISIS) in a clandestine way to rid her country of its Hindu population. “ISIS has forced Hindus to flee from their ancestral homeland,” he stressed. “There is massive land grabbing, torture, rape, murder, the destruction of Hindu temples and gods, the threatening of Hindu priests and even the killing of Hindu priests. It is all the handiwork of ISIS jihadists. Forced conversion is another ploy to diminish the minorities. Forcefully, they have converted many Hindu women and girls.”Recently, the HSC issued a report on human rights abuses suffered by the Hindu population within Bangladesh in 2016. The violence against the Hindu community in Bangladesh continues to date and the Bangladeshi government plays a role in this violence. As Basu noted, “Through the Eighth Amendment to the Constitution, Islam was declared as the state religion of Bangladesh with the provision that other religions may be practiced in peace and harmony. Since then, the minority community (largely Hindus) face discrimination, continuous atrocities and violence. It is also documented that the political process and the political parties are a major source of discrimination against the minorities.”“Hindus are being marginalized in Bangladesh,” he added. “The number of Hindus in Bangladesh is decreasing dramatically.”According to Ananta Kumer Roy, this is because of the Bangladeshi government’s attitude towards the Hindus within the country: “They know we are a religious minority and are powerless. They make our weakness an advantage and an excuse to threaten us, rape our sisters and mothers, beat and seize our land, turning our happy families into helpless nomad refugees.”The Bangladesh Hindu Buddhist Christian Unity Council reported that 25 Hindu homes were destroyed, 51 Hindus wounded and 81 Hindu temples, monasteries and statues destroyed between January and June 2017 in Bangladesh. During this past Ramadan especially, Bangladeshi Hindus lived in fear as a 500-year-old Hindu temple was vandalized. Around the same period of time, a Hindu mother and daughter were gang-raped near a riverside on a trawler by vandals, some of them associated with the Bangladeshi government. These are not isolated incidents. According to local sources, attacks upon Hindu people, their homes and their holy sites within Bangladesh have become a daily occurrence.According to Basu, Sheikh Majubur Rehman, the father of Sheikh Hasina, always despised the minorities and Sheikh Hasina vowed to follow in her father’s footsteps when she came into power: “So, her policy is to make Bangladesh free of the minorities. With the government supporting terrorists and jihadists, Muslim fanatics have [raised] their ugly faces.” He noted that ISIS is not operating in the open since Sheikh Hasina’s government does not want an international backlash but “they camouflage themselves with the ruling party’s rank and file and Islamic extremist groups. Due to this, they have kept up their dreadful activities at ease. Even if an arrest is made, it is classified as a local minor incident and small charges are made against the terrorist. No stringent anti-terror law is applied.”As Jews, we have an obligation to stand by the Hindus of Bangladesh during their hour of need. Like the Hindu population in India, the Hindu population in Bangladesh is increasingly open to pursuing a relationship with Israel, believing it can be beneficial in helping to liberate their people from the yoke of this horrific oppression. The Bangladeshi Hindus view Israel as a source of inspiration of what they hope that a more tolerant Bangladesh can be one day if there are free and fair elections with international monitoring that will permit the country to move in a more democratic direction. For this reason, the Jewish People should stand in solidarity with them and help them to obtain justice, human rights and to pursue democracy.The author is a senior media research analyst at the Center for Near East Policy Research and correspondent at the Israel Resource News Agency. She is the author of Women and Jihad: Debating Palestinian Female Suicide Bombings in the American, Israeli and Arab Media.