One of the goals of the Olympic Games is to bring together the nations of the world to compete in an atmosphere of good sportsmanship and mutual respect. 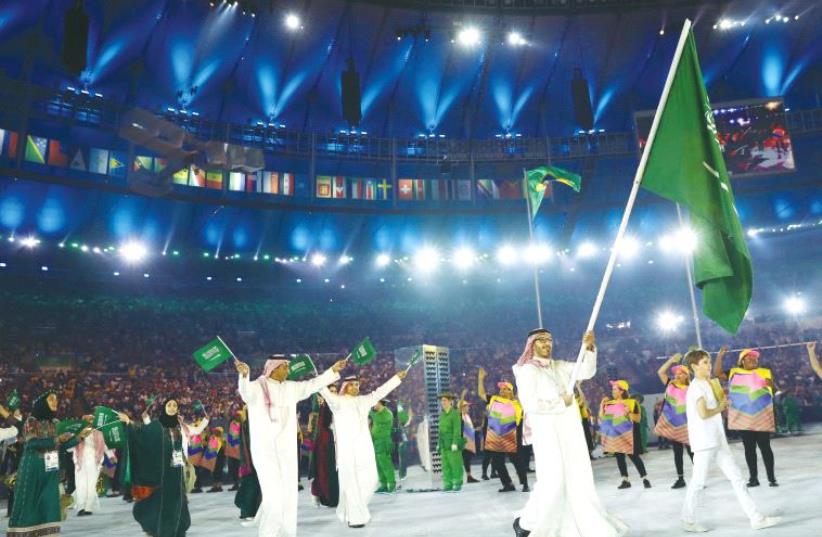 THE SAUDI ARABIAN delegation arrives at the Olympic opening ceremony in Brazil.
(photo credit: REUTERS)
Advertisement
What’s in a handshake? Egyptian judoka Islam El Shehaby refused to accept the hand of Ori Sasson, who had just defeated him, a clear breach of judo etiquette. Sasson, who went on to win a bronze medal in the men’s over-100kg. judo contest at the Olympic Games in Rio de Janeiro, was hardly affected. When asked about the incident, Sasson said he shrugged off the snub and focused on his quest for a medal. “My whole life led up to this amazing moment,” he said.International news media thought Shehaby’s behavior was worthy of attention. The New York Times, Newsweek, the Los Angeles Times, The Washington Times and a number of European newspapers ran stories about the incident.Here was a very public case of politics intruding on a sports events. The Egyptian intentionally and blatantly broke with judo’s norms of demeanor to register protest against a representative of the Jewish state.This was not the first time at the Rio Olympic Games that athletes from Muslim nations have shown antagonism toward Israeli athletes.Just days before Sasson’s victory, a Saudi judo competitor pulled out of her first-round match because of a prospective second-round bout tie with an Israeli rival. The official reason was that she was injured, but it seems the real reason was to avoid facing an Israeli in the next round.And then, the Lebanese delegation at the Games refused to allow Israeli competitors on board their bus.The 1972 Munich Games are remembered primarily for the Palestinian terrorist attack that resulted in the death of 11 Israeli sportsmen.Seventy years ago George Orwell, in his essay “The Sporting Spirit,” traced the rise of competitive sports to the rise of nationalism. Defeat is not just proof of players’ weakness, inferiority or instability as sportsmen, it is a humiliation extending well beyond the playing field that reflects badly upon one’s tribe or one’s nation. This is not to say that sport is the cause of bigotry and racism; rather it is a foil for rousing passions connected with tribalism and nationalism.Ahead of his bout with Sasson, Shehaby was exposed to this tribalism, which in this case also had a religious element. On social media Egyptians attacked Shehaby for agreeing to participate in the match to begin with.He was said to be under tremendous pressure to forfeit the bout. A loss, it was said, would bring shame upon Islam.Nationalism, religious pride and tribalism do not, however, have to be reinforced by hatred of the other.One of the goals of the Olympic Games is to bring together the nations of the world to compete in an atmosphere of good sportsmanship and mutual respect.Politics should not play a role and rivalry should be channeled into competition that is played out in adherence to rules and codes of etiquette. In the sporting context, therefore, even a small breach such as the refusal to shake a rival’s hand is important. A failure to respect rules of conduct on the playing field can easily lead to violence.Unfortunately, the hostility Shehaby expressed against Israel is not an isolated phenomenon. Though Egypt has maintained diplomatic ties with Israel since 1979, large swaths of the population hold highly negative attitudes toward Israelis.Peace between Israel and Egypt must not be only between governments. It must also be fostered between peoples. Shehaby had a chance to make a public display of the potential for such peace. Unfortunately, he squandered it.In contrast, during the 1936 Olympic Games in Berlin, Luz Long used a handshake to reject Nazism’s racist ideology. After losing to Jesse Owens in the long jump competition, the German athlete approached Owens before hundreds of thousands of spectators and shook Owens’s hand.Owen later said of that experience: “You can melt down all the medals and cups I have, they wouldn’t be a plating on the 24 karat friendship I felt for Luz Long at that moment.”The power of a handshake should not be underestimated.