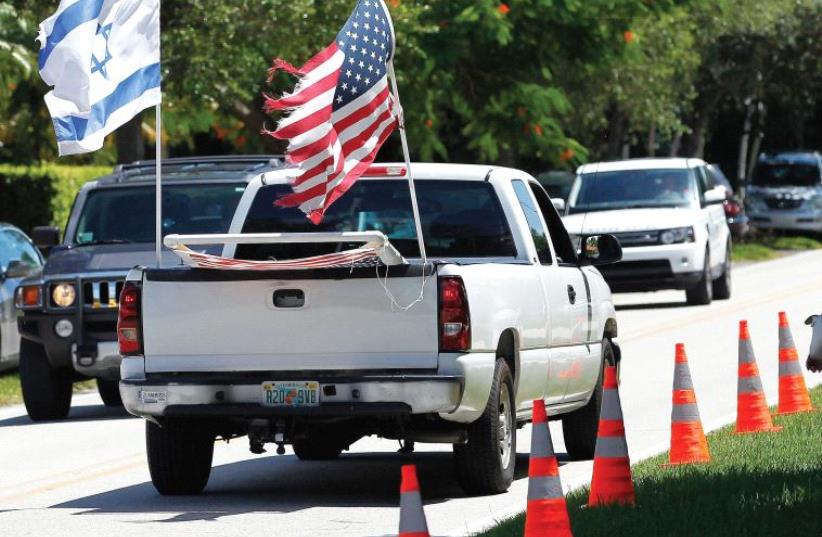 Israeli and American flags.
(photo credit: REUTERS)
Advertisement
While in New York, Prime Minister Benjamin Netanyahu met with the presidential candidates of both major parties.To his credit, Netanyahu managed to maintain a statesmanlike neutrality that reflects America’s broad, non-partisan support for Israel. The prime minister was less successful at doing this in the previous presidential elections, during which he was perceived as favoring Mitt Romney over Barack Obama.In the months that remain until the November presidential election, Netanyahu and other Israeli leaders should strive to maintain their neutrality. The ties between Israel and the US are too strong and profound to turn support for Israel into a partisan issue.Israel is an American ally in the most profound meaning of the word, and this should be reflected in our diplomacy.Regardless of which party receives a mandate from the American people to enter the White House, relations with the US will remain strong. That is apparent from the statements made by both candidates, but it is also self-evident from the very nature of the alliance between the US and Israel. In every significant way Israel and America are allies.Ideologically speaking, Israel shares America’s values.Though they developed differently, the democratic institutions of both countries are informed by many of the same ideals. The founding fathers of both countries were influenced by the Bible’s skeptical and ambiguous approach to absolutism and the divine right of kings and its insistence on the basic dignity of every human being as made in the image of God.Freedom of speech and freedom of assembly are protected in both countries even in the most extreme of cases. In Israel, Arab Israeli parliamentarians speaking in the Knesset are permitted to voice radically anti-Zionist positions; Israeli policies on the West Bank are regularly and publicly attacked; even the most high-ranking officials are not immune to muckraking. In America, the right to express the most distasteful opinions – from Holocaust denial to white supremacism to radical criticism of US policies abroad – is zealously defended.Tactically, Israel identifies with and promotes the US’s global vision of promoting freedom. Israel’s army is formidable and completely loyal to its democratically elected governments. The Jewish state helps to secure America’s borders and its interests and protects the lives of Americans – not just in the Middle East but elsewhere.Economically, Israel’s dynamic hi-tech industry – tightly related to its defense sector – develops both civilian and military technologies that have helped upgrade American capabilities. And Israel helps stimulate the US economy through trade, technological innovation and job creation.Israel is the only Middle Eastern state never to oppose America on major international issues. Unlike other true US allies such as European states, Israel is one of the few countries aligned with the US that not only has the will but also the wherewithal to aid the US when necessary.Though Israel is a tiny country, the IDF is said to be larger than the French and British armies combined. Throughout the decades since its creation, Israel has been in constant conflict with its neighbors, which has forced it to maintain a superbly trained and equipped military that is capable of mobilizing within a few hours.Both candidates understand this as do the vast majority of Americans, regardless of their party affiliation.Foreign policy “realists” have attempted to argue that the US’s open support for Israel is detrimental to American interests. If America were to reduce its exposure to Muslim criticism of Israel by limiting its ties with the Jewish state, it would be beneficial to US interests, they say.But these realists – who see themselves as driven solely by rational considerations – forget that this line of thinking leads to increasingly larger concessions and compromises on the sorts of basic values shared by the US and Israel.For just as the US’s close ties with Israel anger Islamists, so does America’s defense of gender equality, its defense of the freedom of speech, its support for religious freedom.If the special alliance between Israel and the US were to cease to exist, it would mean that either the US or Israel or both had radically changed for the worst.Since this has not happened, it matters little to Israeli- American relations which candidate is elected in November.Remaining neutral on the Trump-Clinton race reflects the knowledge that the ties between the US and Israel are more profound than any presidential campaign.