What is unique to Judaism is the concept of mutual responsibility even when the Jews no longer lived in their own land but were scattered across the world. 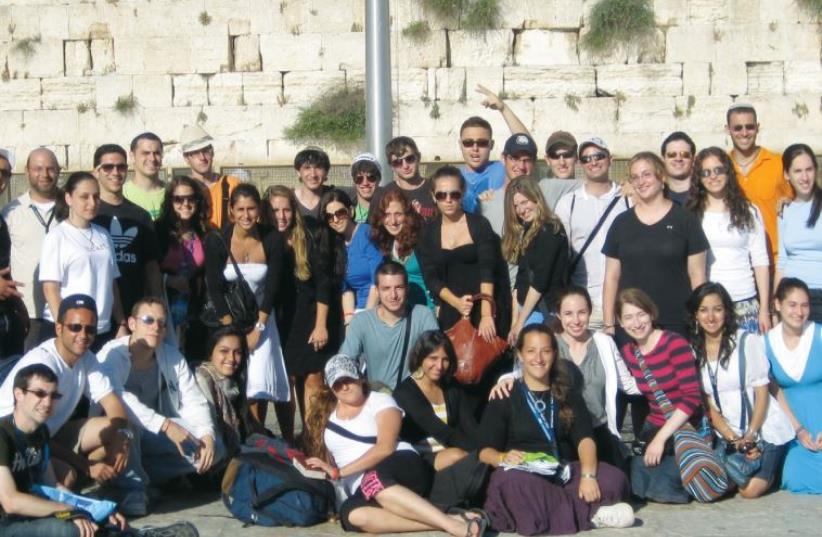 A Taglit-Birthright group, part of the OU ‘Israel Free Spirit’ program, visits the Western Wall.
(photo credit: OU ISRAEL)
Advertisement
The idea of collective responsibility is deeply embedded in Jewish thought. When one Jew is in trouble, the entire Jewish people is responsible for bailing him or her out. When one Jew sins, the entire community is in some sense culpable.There is, it is true, nothing unique to Judaism in the idea that we are all implicated in one another’s fate. This idea holds true for the citizens of any nation. If the economy is strong, chances are most everyone will benefit; in times of depression, nearly all suffer. If crime strikes one’s neighbor, it has an effect on one’s own sense of security. If there is law and order, the feeling of stability is shared by all.What is unique to Judaism is the concept of mutual responsibility even when the Jews no longer lived in their own land but were scattered across the world. Polish Jews who conversed in Yiddish still felt bound to the fate of the Jews of Muslim lands. When times were good for the Jews of Spain they nevertheless shared in the sadness of the Jews of Poland who suffered economically. Conversely, during the expulsion of the Jews of Spain when Polish Jewry flourished, there remained a sense of a shared fate.But maintaining a feeling of mutual responsibility among all Jews is not easy. With the return to their homeland Jews seem to have become a nation like all the nations. Many have lost a feeling of responsibility for Jews who are not citizens of the State of Israel. The connection that once extended beyond borders, beyond proximity, beyond shared circumstances seems to be weakening in the wake of the “normalization” of the Jewish condition.That is the conclusion one could reach from a survey published exclusively in The Jerusalem Post this week.According to the survey conducted by the Diaspora Affairs Ministry three weeks ago that was obtained by the Post’s Tamara Zieve, Israeli Jews do not feel particularly responsible for strengthening the Jewish identity and continuity of their brothers and sisters in the Diaspora.Half of those surveyed said they somewhat disagreed or strongly disagreed that Israel was responsible for Jewish continuity in the Diaspora. The majority were unenthusiastic about investing state funds in efforts in the Diaspora aimed at strengthening Jewish identity and continuity.Hagay Elitzur, the Diaspora Affairs Ministry’s senior director, said many Israelis see their relationship with the Diaspora in functional terms. To the extent the State of Israel’s interests can be advanced, it makes sense to foster good ties with Diaspora Jewry. For instance, 49 percent of respondents said it was “very important” to take into consideration Diaspora Jewry when making decisions in Israel about security and foreign affairs. But this purely utilitarian approach to Israel-Diaspora ties is a far cry from the type of mutual responsibility unique to Judaism, which was based solely on an intrinsic feeling of connectedness.Zionism’s potential for strengthening Jewish identity is undeniable. Even a single, well-planned trip to the Jewish state can have an impact. A study published in 2009 by the Cohen Center for Modern Jewish Studies at Brandeis University, based on 2,200 US Jews, found that alumni of Taglit-Birthright’s free 10-day trips to Israel were 57% more likely to marry Jews than those who had not participated.The trips – aimed at unaffiliated Diaspora Jews aged 18-26 – have had a “profound long-term impact on Jewish identity and connectedness to Israel. Participants in the trips were 30% more likely to raise their children as Jews; [had] a 23% greater chance of feeling connected to Israel; and were 24% more likely to strongly agree with the statement, “I have a strong sense of connection to the Jewish people.”Becoming acquainted with a Jewish state has the potential to deepen Jewish identity. Unaffiliated Jews come to face to face with a Judaism that is vibrant and relevant.Israel is a place where Jews can express their Jewishness without fear of being looked at as weird or exotic; where they can defend themselves against their many enemies without having to rely on the largesse of various host countries; where Jewish culture can flourish in a Hebrew-speaking society.Israelis must not ignore the Jewish state’s tremendous potential for awakening unaffiliated Jews to the possibilities of living in their own state – even if they choose not to. Jews have a long tradition of mutual responsibility, stretching back hundreds of years. It would be a shame to see this tradition come to end in the Jewish state.