On the 69th anniversary of the state’s establishment we should remain vigilant in protecting our democratic values as stated in the Declaration of Independence. 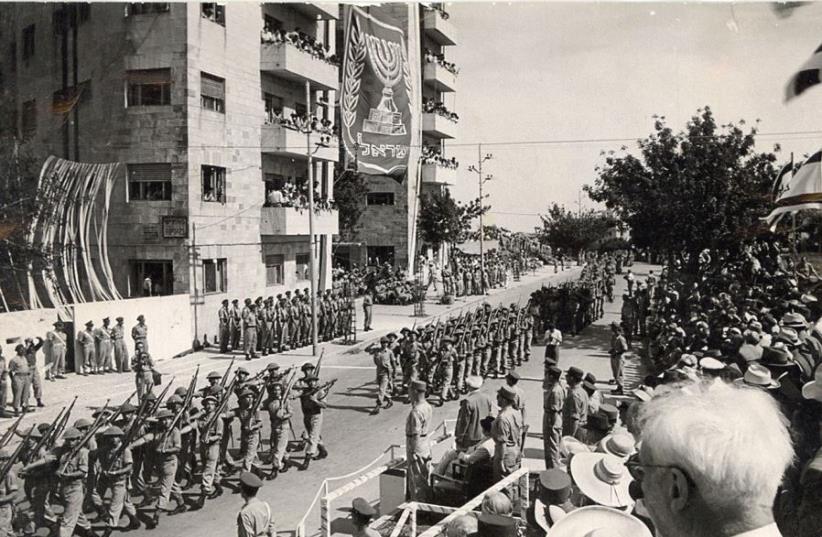 A military parade takes to the streets on Independence Day, 1950
(photo credit: THE JERUSALEM POST/HIRSHBAIN)
Advertisement
The Declaration of Independence states clearly that the newly created State of Israel would immediately embark on the task of drafting a constitution.The British terminated their mandate over Palestine on May 14 (Iyar 5) at midnight. A constitution was supposed to be drafted “not later than October 1, 1948.”But, as we know, a constitution was never drafted. David Ben-Gurion opposed a constitution. Perhaps he was looking to the British model, which he believed would be more appropriate for the fledgling Jewish state. Perhaps he was concerned a constitution would restrict his powers as uncontested leader. Perhaps he realized society was simply too polarized to reach a consensus. Perhaps he believed individualistic and universalistic emphases of constitutions that follow the liberal tradition were incompatible with a nation-state that declared itself to be both democratic and Jewish.Whatever the reason, Ben-Gurion managed to bury the idea of a constitution by tasking a committee of politicians with drafting the document. Insuperable bickering killed the endeavor in the early 1950s as Orthodox traditionalists quickly clashed with atheists; Revisionists were pitted against Labor socialists; liberals were at odds with nationalists.In the 1990s then-Supreme Court president Aharon Barak instituted what has been referred to as a “judicial revolution,” which gave quasi-constitutional status to Basic Law: Human Dignity and Liberty and Basic Law: Freedom of Occupation. Ever since then, the judiciary has expanded dramatically to include the ability to strike down legislation that in the Supreme Court’s view is contradictory to these two basic laws.However, without a proper constitution, the Supreme Court’s judicial activism has come under fire. A number of politicians, particularly on the Right, are constantly seeking to limit the powers and autonomy of the Supreme Court.In 2000, the Israel Democracy Institute launched a campaign called “constitution with consent,” which sought to muster political support for the drafting of a constitution.But the effort failed largely for the same reasons as it had in past.Advocates of a constitution argue that such a document is the only remedy for our deeply fractured society. Only a constitution, they claim, can provide Israelis with a common vision and a shared set of principles. Unlike Britain, which has a long legal tradition on which to base itself, Israel is a country more akin to newly formed democracies like the US and Australia.But ironically, the same polarization and fragmentation within society that advocates of a constitution seek to remedy, has prevented Israelis from uniting under the auspices of a document drafted consensually.Perhaps the very idea that a constitution can be drafted through consensus is misguided. A constitution’s essence is in its principled stance on immutable and universal values such as human rights and freedoms that are true even when a tyrannical majority says otherwise. The constitution in a liberal democracy is of its very nature a document drafted by a small group of elites. Attempts to reach a consensus on the matter, therefore, contradict the very spirit of a constitution.Today, 69 years after Ben-Gurion first publicly read the Declaration of Independence, we are no closer to an agreement on a constitution. And there is little likelihood that this state of affairs will change any time soon. Nor is there a group of elites to whom society is willing to defer for guidance.Jews are a contentious group and Ben-Gurion knew this.That’s probably why he opposed attempts to draft a constitution.But the fact that the country lacks a constitution does not detract from the robustness of its democracy.On the 69th anniversary of the state’s establishment we should remain vigilant in protecting our democratic values as stated in the Declaration of Independence, which includes “precepts of liberty, justice and peace taught by the Hebrew prophets” and the upholding of “the full social and political equality of all its citizens without distinction of race, creed or sex.”Indeed, the Declaration of Independence, which remains relevant to this day, should continue to be the moral foundation for Israel’s vibrant and dynamic society.