Whether it be in our education system or in our state-run industries, we are in need of reforms. 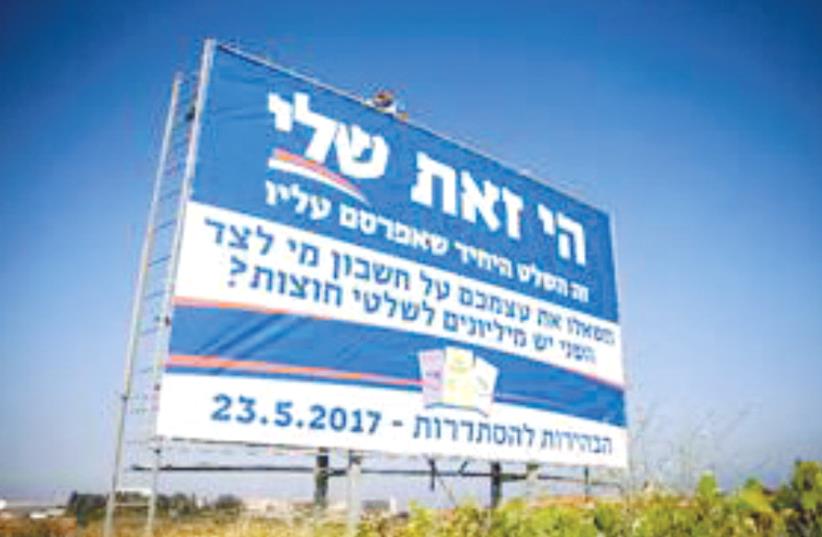 ‘HI, IT’S SHELLY,’ says this sign, erected Monday on the southbound lane of the Ayalon Highway. It uses Zionist Union MK Shelly Yacimovich’s now-famous introduction to her Facebook posts to promote her campaign for election as head of the Histadrut labor federation.
(photo credit: Courtesy)
Advertisement
Finance Minister Moshe Kahlon came to the rescue of Avi Nissenkorn in his race against Zionist Union MK Shelly Yacimovich for the leadership of the Histadrut labor federation.In the months leading up to the elections, the finance minister worked with Nissenkorn to end labor disputes in the courts, in the Israel Election Corporation, the Tax Authority and Israel Railways. Generous wage agreements were signed and Attorney General Avichai Mandelblit did nothing to stop their signing, despite the potential impact they could have on the Histadrut election results.Normally, the finance minister and the head of the largest union in the nation are at odds. Finance ministers want to institute money-saving reforms while union heads seek to prevent these reforms; finance ministers tend to seek the betterment of the entire economy while the Histadrut chairman looks out for the rights of workers, particularly those belonging to the strongest unions with the most leverage power.However, in the case of Nissenkorn and Kahlon there was a remarkable amount of cooperation and the dovetailing of objectives. Kahlon apparently is in no position to open up another front right now against the Histadrut. He has just clashed with Prime Minister Benjamin Netanyahu over the reforms in the new public broadcasting corporation and he is working hard to muster support for reforms in the housing industry. He is also working to bring down the cost of living by lowering duties and is attempting to increase competition in the financial sector. The last thing he needs is a prolonged battled with organized labor.Now Nissenkorn has received the mandate of Histadrut workers. Until now he served as chairman after Ofer Eini, the previous chairman, stepped down in mid-term. Will Nissenkorn and Kahlon continue to cooperate? If they do, will it be a purely political arrangement in which one helps the other to maintain the status quo and neither takes potentially destabilizing steps to reform? Or will the two take advantage of an opportunity to bring about change that in the long run will improve the economy dramatically, even if in the short-term it will lead to conflict with entrenched interests? Low productivity is a major drag on Israel’s economy. It translates into lower wages and higher poverty levels, as well as larger gaps between the rich and the poor. More capital needs to be invested in infrastructure in order to make it easier for workers and goods to get from one place to another. Better occupational training and the introduction of more advanced industrial technologies is another way to improve productivity.Where Kahlon will really need Nissenkorn’s help, however, is in introducing reforms designed to increase competition.Exposing the local building sector to foreign construction firms with more technologically advanced equipment will put pressure on local firms to adapt instead of relying on cheap labor. At Ashdod and Haifa, longshoremen who belong to the Histadrut must not be allowed to get in the way of reforms that include the creation of privately-run ports and increasing labor flexibility. At Israel Electric Company, opposition to reform must be overcome. Schools much be able to fire bad teachers and hire ones who will give our children the education they need to succeed in the 21st century.The Histadrut labor federation election garnered a lot of media exposure, but another Histadrut body held elections last week: the Histadrut Teachers’ Union, which split from the Histadrut labor federation in 1997.Last week, the teachers chose Yaffa Ben-David as their new union head. Similar challenges face the two the Histadrut bodies. As is the case in the ports, in IEC and in other public-sector firms, our education system is in dire need of reform. While there are many excellent teachers working in our schools, there are also many who are less than mediocre. Unfortunately, it is nearly impossible to fire bad teachers once they have achieved seniority. That needs to change. Excellence should be rewarded; substandard performance must not be tolerated. Other reforms should be instituted as well that give more power to teachers to teach the way they see fit instead of trying to dictate methods and programs in a centralized fashion.Whether it be in our education system or in our state-run industries, we are in need of reforms that are possible only if workers and the government cooperate for the greater good. Will Nissenkorn, Ben-David and Kahlon rise to the occasion?