Organizers of the Flag Parade have agreed to a police request to change the schedule of the march through the Muslim Quarter of Jerusalem out of respect for Muslim sensitivities. 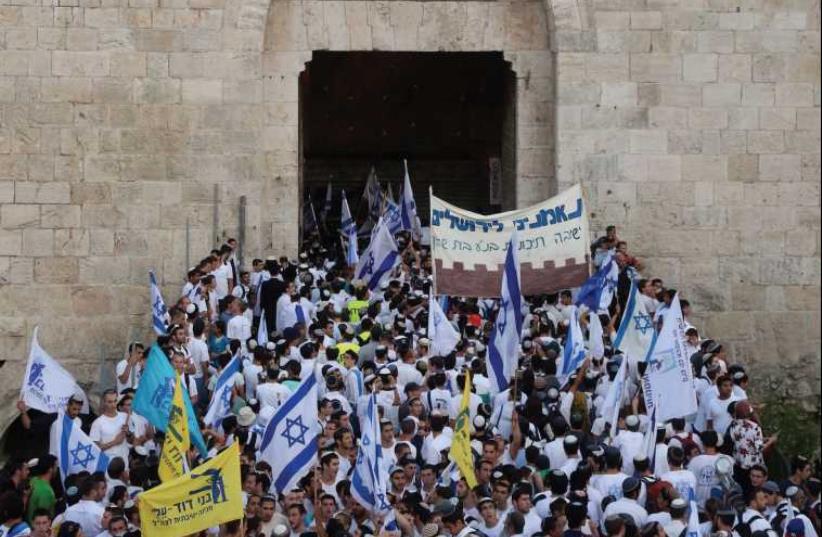 Jerusalem Day
(photo credit: ILLUSTRATIVE: MARC ISRAEL SELLEM)
Advertisement
Tens of thousands of Israelis, most of whom belong to the religious-Zionist stream of Judaism, will come together Sunday to participate in the traditional Flag Parade for Jerusalem Day. The mood will be festive, with singing and flag waving. But this year an additional element will be added to the celebrations: the importance of seeking peaceful coexistence.Organizers of the Flag Parade have agreed to a police request to change the schedule of the march through the Muslim Quarter of Jerusalem out of respect for Muslim sensitivities. The idea is to avoid clashes in the Muslim Quarter between flag-waving religious Jews and crowds of Muslims on their way to pray on the Temple Mount.In a sense, the arrangement that enables peaceful coexistence of celebratory religious Jews alongside Muslim worshipers is a microcosm of the unique societal, cultural and religious tensions so characteristic to the city.On one hand, it is difficult to be indifferent to a rebuilt Jerusalem. Even Jews not inclined to seeing in contemporary events manifestations of Providence cannot help but admit that Jerusalem’s resurgence is amazing.Forty-nine years after the city was united, Jerusalem has become a bustling metropolis that is bigger today – both in population and in square meters of built-up area – than ever before in history.As writer Cynthia Ozick has noted, Jerusalem is a “phoenix city” with a “history of histories.” Like the Phoenix, Jerusalem has burned and been reborn from its own ashes over the millennia. But no previous rebirth can quite compare to the present one.Assyrians, Babylonians, Seleucids and Romans have come and gone. Muslims and Christians – each with their own ideas about Jerusalem’s meaning – have killed each other for the right to rule the city.All along Jews never stopped praying for a rebuilt Jerusalem.Unshackled from oppressive Jordanian rule over its eastern half, Jerusalem could thrive and develop. And it has.The city’s population has grown to 870,000 as of the end of 2015, according to figures released by the Central Bureau of Statistics for Jerusalem Day, which makes it the largest city in the country.The light rail has transformed the city, as have the satellite neighborhoods of Pisgat Ze’ev, Givat Ze’ev, Har Homa and Gilo. Just wander the streets around Mamilla and Ben-Yehuda and witness the diversity. Jews and non- Jews both locals and tourists rub shoulders, a Babel of languages can be heard.On the other hand, Jerusalem faces myriad challenges.Perhaps the most formidable is the integration of Arab residents, who make up 37 percent of the capital’s population.Jerusalem Arabs who spoke to The Jerusalem Post’s Opinion Page Editor Seth Frantzman this week complained of unfair treatment when it comes to municipal services, infrastructure such as water and roads, and housing.A proportion of east Jerusalem’s children live under the poverty line. There is a shortage of classrooms in Arab schools. No large housing project has been completed for the growing Arab population.The construction of the security barrier cut off tens of thousands of residents of Arab neighborhoods from the rest of Jerusalem. Though they live within the municipal boundaries, they do not receive basic municipal services such as garbage collection and sewage and water services. Law enforcement is lax because police dare not venture into these areas.The difficulty of integrating Jerusalem’s Arab population is exacerbated by the political conflict. Only around 1.5 percent of Arab residents vote in municipal elections even though they have a right to, because doing so would be seen as legitimization of Israel. But as a result, Arabs have no representative in the city council who can advance their interests.For nearly two millennia Jews prayed to return to Zion, which was often conceived of not principally as a physical place but as an ideal, a symbol of Jewish spirituality and of hope for peace in a more perfect era. We have not achieved peace. But the physical resurgence of Zion in under way.On Jerusalem Day we should feel thankful for living in a generation that has witnessed a rebuilt Jerusalem. But we must not lose sight of the many challenges presented by Yerushalayim shel mata – the earthly, material Jerusalem of brick and mortar and human beings.