Many British Jews feel threatened by BDS, because it represents another front in the war of extermination against Israel. 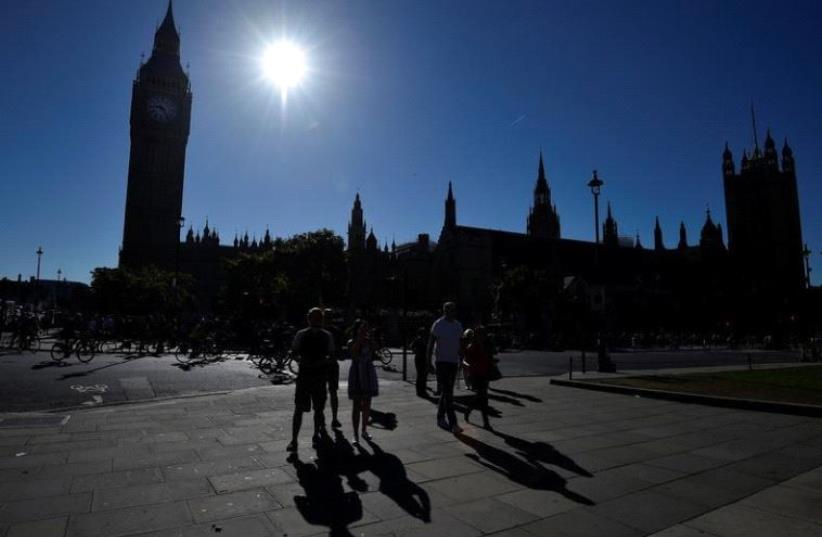 London
(photo credit: REUTERS)
Advertisement
Before his scheduled meeting with US President Donald Trump in Washington in mid-month, Prime Minister Benjamin Netanyahu is to hold his first session with the leader of another important ally, British Prime Minister Theresa May, on Monday. It will be their first meeting since May became prime minister in July.Pundits suggest that their get-together is part of a Netanyahu plan to revive a 1980s troika that included Israel, Britain, and the US during an era when Ronald Reagan was president of the United States and Margaret Thatcher was prime minister of Britain.Netanyahu mentioned these upcoming visits at a memorial ceremony in Ariel for Likud MK and former mayor Ron Nachman, saying his meeting with Trump has “a great deal of importance” for Israel and the Jewish people. So does his encounter with May.Netanyahu told the press that he and May will discuss “the changing reality in our region, and the need to adopt new, common approaches to face the big challenges in our region, first and foremost the threat from Iran.”Their meeting follows recent demonstrations of support for Israel by May regarding the recent exercise in futility of the so-called Paris peace conference, which excluded representatives from Israel and the Palestinian Authority.“We have particular reservations about an international conference intended to advance peace between the parties that does not involve them – indeed, which is taking place against the wishes of the Israelis – and which is taking place just days before the transition to a new American president when the US will be the ultimate guarantor of any agreement,” a statement by May’s Foreign Office read.The Paris conference witnessed an important development: Britain, joined by Australia, broke ranks with some 70 countries and declined to endorse a tepid statement about preserving the two-state solution for Israel and the PA while condemning Israel’s settlement policy.Even though this move echoed positions long supported by previous British governments, it was a wakeup call that stunned the would-be peacemakers. “It was a watershed moment for UK-Israel relations and a huge change from anything I had seen before,” Jonathan Hoffman, a former vice chairman of Britain’s Zionist Federation, told JTA , noting that the United Kingdom typically sided with its allies on policies toward the Jewish state.The British “snub” of the Paris peace summit – as The Guardian characterized it – took the world by surprise, considering expectations that Britain would repeat its leading role, as Foreign Secretary Boris Johnson had boasted of drafting and passing the December 23 Security Council resolution condemning Israeli settlements as a “flagrant violation of international law.”Trump has called for Britain to veto any further action on Israel at the UN and a British diplomat told JTA in confidence on Monday that his country would not support another attempt in the near future to pass a hostile resolution on Israel. Given that French officials were called out by Trump’s transition team for holding the Paris summit, the Guardian suggested that May engineered the Paris snub to demonstrate how her new policy follows Trump’s lead.Another indication followed on December 29, when May’s spokesman openly criticized then-secretary of state John Kerry’s statement the previous day defending the US abstention on the Security Council’s anti-settlements resolution. The British prime minister chided Kerry for “focusing on only one issue” – the settlements – and for calling the Netanyahu government the “most rightwing” in Israel’s history.“We do not believe that it is appropriate to attack the composition of the democratically elected government of an ally,” May’s office declared in its public castigation of Kerry.May has taken Britain further along the road to sanity regarding Israel than its effort a year ago, when then prime minister David Cameron took bold action against the Boycott, Divestment and Sanctions movement. He declared such boycotts are divisive, potentially damaging to the UK’s relationship with Israel and risk fueling antisemitism.Many British Jews feel threatened by BDS, because it represents another front in the war of extermination against Israel. By standing up for Israel, Prime Minister May has courageously shown that Britain is on the right side of history.