The Vatican announced this week that it was poised to sign a treaty with the Palestinian political leadership. 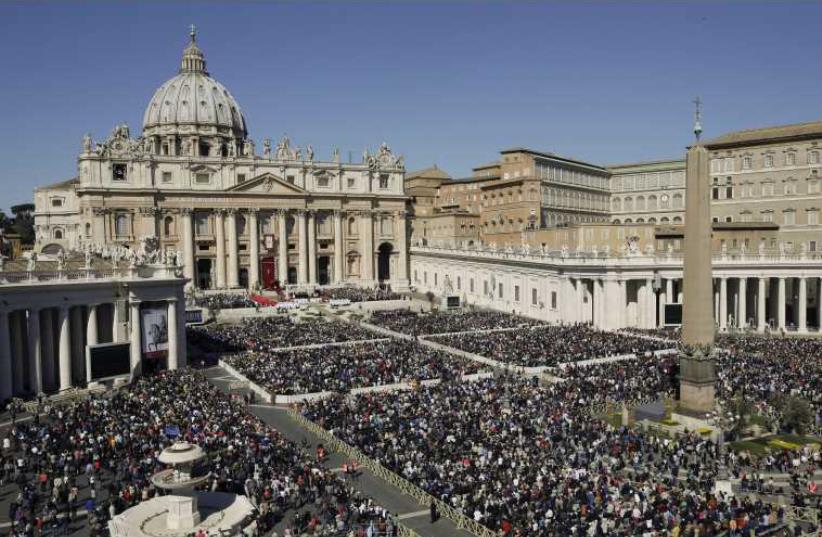 The Vatican
(photo credit: REUTERS)
Advertisement
The Vatican announced this week that it was poised to sign a treaty with the Palestinian political leadership, representing what was referred to in official Holy See documents as the “State of Palestine.”News media played up the announcement, with The New York Times calling the specific mention of a “State of Palestine” a “significant symbolic weight to an intensifying Palestinian push for international support for sovereignty that bypasses the paralyzed negotiations with Israel.”Palestinian leaders celebrated the Holy See’s seeming endorsement as well. Hanan Ashrawi, a PLO executive committee member, told AP that, “The significance of this recognition goes beyond the political and legal into the symbolic and moral domains and sends a message to all people of conscience that the Palestinian people deserves the right to self-determination, formal recognition, freedom and statehood.”Meanwhile, government officials and a number of Jewish organizations lamented the Vatican’s recognition. The agreement between the Vatican and “Palestine,” according to a source in the Foreign Ministry, does not move the peace process forward “and moves the Palestinian leadership further away from returning to direct bilateral relations.”But Vatican officials were more reserved. “We have recognized the State of Palestine ever since it was given recognition by the United Nations [General Assembly in 2012] and it is already listed as the State of Palestine in our official yearbook,” Vatican spokesman Father Federico Lombardi said. Indeed, during Pope Francis’s visit to the region last year, the Palestinian Authority was referred to as the “State of Palestine” in advertisements and announcements released by the Vatican. Francis also referred to the State of Palestine in a speech he made in Bethlehem.The reasons why recognizing a “State of Palestine” at present is counterproductive to forwarding talks between Israel and the Palestinians have been articulated by us on previous occasions. It’s worthwhile restating them.First, Palestinians themselves are split between two different “states,” one on the West Bank and one in the Gaza Strip. The respective leaderships of these geographical entities are hostile to one another. As long as Palestinians are divided, it makes little sense to use a term that implies a modicum of unity and an ability to cooperate.Second, Palestinians’ failure to cooperate has resulted in repeated delays in national elections. Mahmoud Abbas, president of the Palestinian Authority, has just entered his 11th year of a four-year term. Parliamentary elections have not been held in the West Bank and Gaza since 2006. So even if there were such as thing as a “State of Palestine,” this supposed “state” has no legitimate political leadership.Who precisely is Abbas representing when the PA signs a treaty with the Vatican? Third, even if elections were to take place on the West Bank and in Gaza now, the result would probably be the creation of an Islamist government. That’s because Hamas would probably win. In April, in the student council election at Bir Zeit University – considered a bellwether of broader Palestinian public opinion – the Hamas-affiliated Islamic Waafa bloc won 26 seats compared to the Fatah-affiliated Martyr Yasser Arafat bloc’s 19 seats.And even if Hamas did not win, it would mean a continuation of Fatah’s rule, which has been marred by infighting, corruption and the brutal suppression of political opposition.We’ve seen how Christians have been forced to live under the rule of Islamists – including in Bethlehem and in the Gaza Strip. Is this the sort of “state” the Vatican wishes to recognize? No people has an unalienable right to a state. National determination is a privilege that must be earned. Palestinians have a lot of work to do before they can be said to be ready for statehood.They must put aside their in-fighting and learn to cooperate.More importantly, they must put in place institutions such as a free press, government transparency, protection of human rights, an independent judiciary and religious freedom for all – including Christians.To be sure, Israel has its own ‘to-do’ list to help create an environment more conducive to achieving peace with its neighbors. But the Vatican’s recognition of the “State of Palestine” does nothing to contribute to that eventuality.