Trump’s ambassador to Israel David Friedman on US recognition of Jerusalem, the Palestinian rhetoric and American Jewry.

By HERB KEINON
DECEMBER 29, 2017 14:41
US Ambassador to Israel David Friedman stands at the Western Wall after lighting the menorah there for the second night of Hanukkah, 2018
(photo credit: Courtesy)
Advertisement
Washington has been mostly silent in the face of the unprecedented Palestinian vitriol toward the United States that followed US President Donald Trump’s decision three weeks ago to recognize Jerusalem as Israel’s capital and move the embassy there from Tel Aviv.Not Palestinian Authority President Mahmoud Abbas’s blistering speech against the US at an “emergency” meeting of the Organization of Islamic Cooperation in Istanbul; not PA Foreign Minister Riyad al-Maliki’s fiery rhetoric at the UN General Assembly vote that slammed the US move; not the PA decision to boycott Vice President Mike Pence when he comes to Israel; not Abbas’s statement that the US has disqualified itself from the peace process – none of that has triggered much of a response from Washington.But the relative silence does not mean the reactions have not been noted.US Ambassador to Israel David Friedman, one of the driving forces inside the administration behind Trump’s historic Jerusalem move, told The Jerusalem Post this week that these types of reactions remain “largely emotional,” and that the Palestinians “overreacted.”“We expected the reaction, although we were disappointed with some of the rhetoric which was ugly, needlessly provocative and antisemitic,” Friedman said. “As we go forward, this has to change.”During his announcement of the move, made in the White House on December 6, Trump said specifically that the United States was “not taking a position on any final-status issues, including the specific boundaries of the Israeli sovereignty in Jerusalem, or the resolution of contested borders. Those questions are up to the parties involved.”US President Donald Trump holds up the proclamation that the United States recognizes Jerusalem as the capital of Israel and will move its embassy there, December 6, 2017 (Reuters)The president, Friedman noted, “was abundantly clear” when he made his announcement “that he was preserving all final-status issues for negotiation between the parties, and the Palestinians unfortunately overreacted. Going forward, we hope that the Palestinian leadership focuses on the future of their people and their opportunity for a better quality of life. If they do, I believe that we can make great strides.”Friedman dismissed Palestinian threats to bring in a new peace mediator, saying, “There is no path around the United States. Israel has made it clear that they will not engage under the sponsorship of any other nation. You cannot clap with one hand. Moreover, only the United States has the regional credibility to bring forward a historic peace agreement.”Asked whether that regional credibility was not compromised by the Jerusalem announcement, especially considering the very negative public reactions among Egyptians, Saudis and Jordanians, Friedman replied that the administration “anticipated the temporary reactions” but has “no doubt as to our continued strong credibility with our Arab allies.”ONE OF the ideas that Abbas is trying to promote is to get the Europeans in general, and the French in particular, to step forward and play a larger role in the process. Friedman rejected the notion that this might be necessary to keep the diplomatic process from dying altogether, and said even those countries recognize that the US “is the only nation that can sponsor a peace agreement.”Washington, he added, remains “steadfast in our commitment to develop a comprehensive plan and we will present it when the time is right.”Friedman, who has said since he was nominated as ambassador in December that he looks forward to eventually doing his job from an embassy in Jerusalem, stood by comments he made after the Trump proclamation, to the effect that the move was in the best interest of Israeli-Palestinian peace. The ensuing furious Palestinian reactions and “days of rage” have not moved him from that assessment.“First of all, we are only two-to three weeks since the announcement and the reaction remains largely emotional,” he said. “More importantly, we have reset the parameters of negotiation to reflect the important reality that Jerusalem will always be the capital of Israel. While this is a necessary step in the process, the president has made clear that he was not prejudging final-status negotiations in any way, shape or form.”Trump, Friedman added, also showed the world “the credibility of his word,” through the announcement.“In the meantime, we are going to remain calm and patient. Our peace team, led by Jared Kushner, remains hard at work putting together our plan. We will reveal it when it is ready and the time is right.”He gave no indication of when that might be. Trump made the decision based “solely on what was best for the United States,” Friedman said. 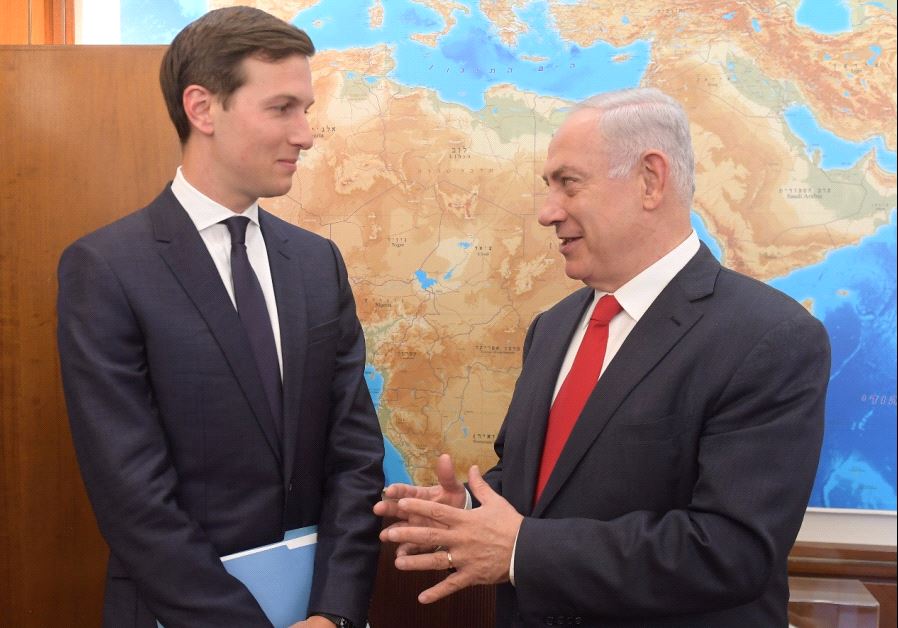 Jared Kushner meets Prime Minister Benjamin Netanyahu, June 21 2017. (photo credit: AMOS BEN GERSHOM, GPO)Asked how this move serves US interests, Friedman responded that Trump “determined that American foreign policy was best served by adopting a reality-based approach to Jerusalem and by being faithful to the will of the American people as expressed overwhelmingly by both houses of Congress. The president demonstrated the credibility of his word while not prejudging final-status issues.”One theme that emerged from Friedman’s comments was that the will of the American people, as expressed through laws passed by Congress dealing with the Mideast issue, should be taken seriously.Trump’s decision on Jerusalem, which was essentially the implementation of a law passed by Congress in 1995, followed two other recent sources of tension between the US and the Palestinians.
Trump makes announcement about Jerusalem (Reuters)
The first was the partial shutdown of the PLO mission in Washington because of a 2015 US law that mandates such a move if the Palestinians pursue Israelis in the International Criminal Court, something Abbas indicated the Palestinians want to do. The second is the Taylor Force Act, which is in the final stages of the US legislative process. That law would cut US funding to the Palestinian Authority unless it stops paying monthly stipends to the families of terrorists in Israeli jails.THE PALESTINIANS say these actions further show the US is not an “honest broker” able to mediate a peace process. Friedman disagrees.“We are a nation of laws and those laws exist to reflect important government policies,” he said. “In the case of the Palestinians, our laws prevent them from using diplomatic facilities in the US while simultaneously encouraging the prosecution of Israelis at the ICC. In the near future, our laws may also prevent funding of the PA if they don’t discontinue payments to terrorists and their families. There is absolutely no reason why the Palestinians cannot comply with these laws and, if they do, the peace process will be greatly advanced.”Friedman denied that the Trump move came in exchange for an Israeli commitment to curtail construction in Jerusalem or elsewhere.“The president issued the proclamation because it advanced American interests and was the right thing to do,” he said. “Israel makes its own decisions on housing construction and we encourage it to do so with sensitivity to all the relevant issues.”Friedman added that as much as he would have liked to open a new embassy in Jerusalem “immediately,” this “simply cannot be done logistically, given the realities of operating one of the largest and most active embassies in the world.”Likewise, he said, getting the words “Jerusalem, Israel” stamped in the US passports of American citizens born in the city will take some time as the issue meanders its way through State Department bureaucracy.“The president’s recognition of Jerusalem as the capital of Israel potentially sets in motion a number of changes that flow through the diplomatic and consular bureaus of the State Department,” he explained. “Those changes are being considered and appropriate actions will be taken once the analysis is completed.”U.S. and Israel flags displayed in Jerusalem after Washington recognized Jerusalem as the capital. (Reuters)While Trump’s move on Jerusalem was roundly applauded in Israel and among Evangelical supporters in the US, the response among American Jewry was not all positive.J Street predictably characterized the announcement as “an unhelpful step with no tangible benefits, only serious risks,” and the Reform movement initially responded negatively, calling it “ill-timed,” an action it could not support “absent a comprehensive plan for a peace process.” A day later that comment was walked back a bit.US Jewry voted overwhelmingly against Trump in the last elections – and when Friedman was asked if Trump could expect any domestic political benefit among US Jews for his Jerusalem move – he responded that it was hard enough to “evaluate the integrity of current polling, let alone to anticipate the results of future polling, so I really can’t speak to what type of bounce may occur.”But, he added, “I firmly believe that American Jews of all streams owe the president an enormous debt of gratitude for his historic decision in favor of Jerusalem. While the president didn’t reach his decision in order to curry favor with any constituency, he certainly deserves all the thanks that he has received.”Trump, Friedman said, will go down in history as “one of Israel’s greatest friends, and the Jerusalem proclamation as an event is on par in significance with the Balfour Declaration. We must all recognize and applaud the courage and moral clarity displayed by the president in affirming, against the wishes of so many other nations, the centrality of Jerusalem to Israel and the Jewish people.”