Recent incidents of hatred and violent acts “in the name of God” by religious Jews in Israel serve as a reminder of darker days in our history. 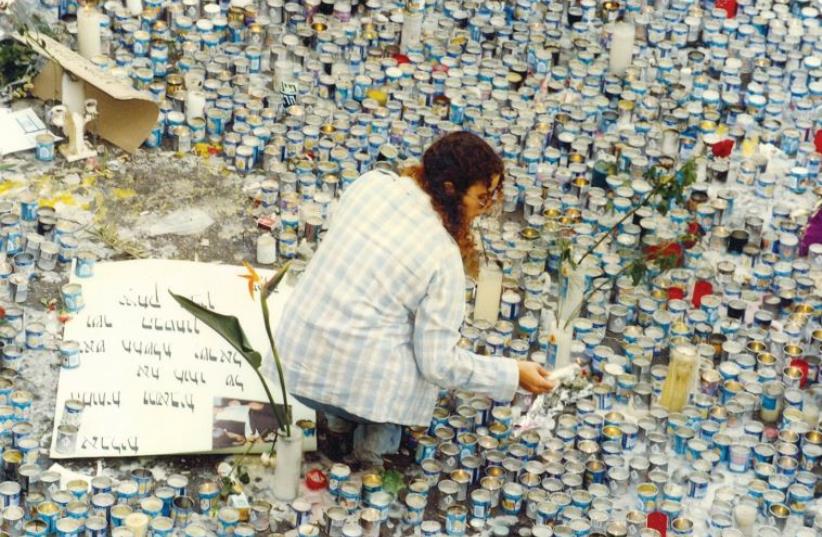 A woman lights at candle at a memorial site set up after prime minister Yitzhak Rabin was assassinated in Tel Aviv, in 1995
(photo credit: JERUSALEM POST ARCHIVE)
Advertisement
Twenty years ago, Israeli society was at an existential crossroads. Yigal Amir fired three bullets at prime minister Yitzhak Rabin. The killer was not a crazy person, nor was he delusional or a “wild weed” at the margins of society. Amir was a law student at Bar- Ilan University, a graduate of an elite combat unit. As a young adult, he was attentive to his rabbis who taught him the Talmudic discussion of “Din Rodef” (“Law of the Pursuer”) found in Tractate Sanhedrin. This religious law gave Amir justification and religious sanction for his political ideology.Israel was established as a Jewish democratic state. It is a Jewish national state with a parliamentary democracy, which allows political freedom and strives to maintain complete civil equality regardless of religion, race or gender. Prior to the establishment of Israel and throughout the young state’s history, this delicate balance has been maintained. State law, the Supreme Court and government officials have received their legitimacy and their authority from the people in a democratic process.Rabin’s murder was the first sign of imbalance, and the past two decades have revealed a disturbing trend in the Israeli public: An abandoning of the vision of a Jewish democratic state. This trend is not one-sided. An increasingly large part of the public draws from a traditional Jewish approach and gives halacha (Jewish law) a growing place in the public sphere. This group sees democracy as an obstacle, a foreign import of Greek culture. Another part of Israeli society is despairing at the increasing religious extremism and the trend of imposing Jewish law in the public arena. They see the Jewish identity of the state a barrier and condemn any manifestation of Jewish identity in state institutions.The trends which I mentioned here are backed up by polls and numerous publications.This is a danger that our leadership repeatedly fails to deal with. Israeli society is very complex and pluralistic. President Reuven Rivlin correctly described this complexity in his speech about the diverse tribes of Israel. Rabin’s murder must serve as a warning to us. To the Left and to the Right. A halachic state of Jewish religious law is not an option, just like the idea of a “state of all its citizens” is a retreat from the vision of the Israeli Declaration of Independence.We need responsible leadership that will strengthen the delicate balance linking the Jewish state to the democratic one. This is the fragile balance which allows us a shared society. Without it, the Zionist dream will turn into a war zone of identities among the various tribes, and to the dismantling of the authority of government institutions, painstakingly established by our ancestors here only 67 years ago.Recent incidents of hatred and violent acts “in the name of God” by religious Jews in Israel serve as a reminder of darker days in our history. The assassination of prime minister Rabin was also an act “in the name of God.”BINA the Center for Jewish Identity and Hebrew Culture, which was established after that murder, promotes a drastically different approach to Judaism – one of unity and pluralism, tolerance and compassion.BINA is an important social-educational organization in Israel, which stands for the principles of democracy, Zionism and social justice.

The author is head of the BINA Center for Jewish Identity and Hebrew Culture.

Tags israel as a jewish state