Keren Or: A ray of light in the Jerusalem Marathon

I so looked forward to the birth of our new daughters, perhaps naively only anticipating the excitement ahead. 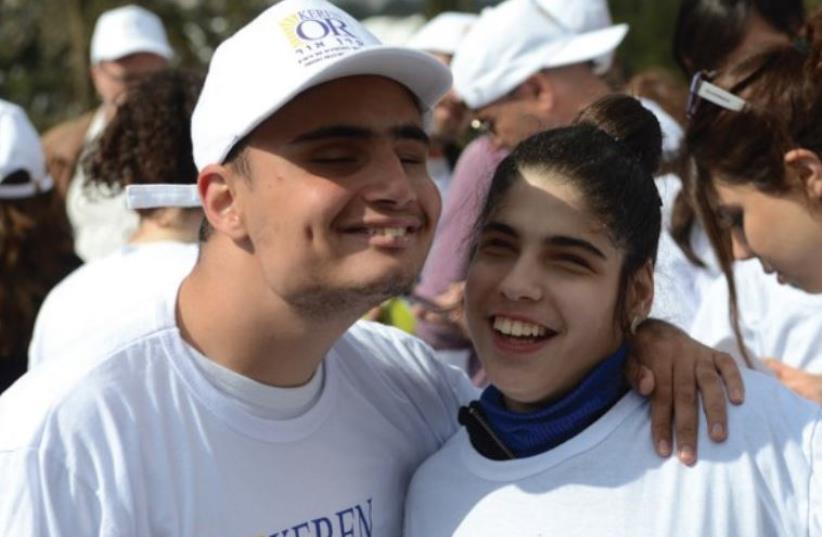 PREAL DAABAH (right) joins with Or Chaim at last year’s Jerusalem Marathon
(photo credit: Courtesy)
Advertisement
In 1999, I was a young woman, pregnant with twin girls. Life smiled at us and I felt such joy.I so looked forward to the birth of our new daughters, perhaps naively only anticipating the excitement ahead. The waiting was hard! Perhaps they felt the same way, because unfortunately, in the 26th week without any warning, they decided to make their appearance.Preal weighed 900 grams, even less than a bag of milk, while her twin sister weighed just 700 grams.Sadly she passed away shortly after birth. At home, Preal’s older sister waited... and waited....Shortly after Preal’s birth, our world changed from one extreme to the other and our home has never been the same since. Preal spent a very long time in the premature babies’ ward, coping with multi-systemic damage. One event was followed by another. She endured nine life-saving operations, each requiring a month’s say in neonatology intensive care.It was a complex and challenging time from so many points of view.I longed to hold and hug her – but for a long time was unable to do so. How can you embrace such a minuscule infant, hooked up to countless pieces of equipment? How many tears my pillow absorbed, night after night.In the Neonatology Department, Preal needed to be given oxygen.On the other hand, this caused harm to the optic nerve and additionally led to CP (cerebral palsy).Initially I was told she’d need glasses. Next, she was given laser treatment. Finally, she was sent to Hadassah-University Medical Center in Ein Kerem for further operations. The medical staff did not give up on her, and tried everything.Nine months later we were informed that the optic nerve was severed and there was no way to repair it. How were we even to begin with such a reality? How can I ever forget what so many doctors told me: “Preal won’t walk, talk, laugh, or even eat alone.” How I can still feel the deep despair.When Preal was about five years old, we were referred to Keren Or.We investigated the school thoroughly and something inside urged me to go with this recommendation despite the great distance from our home. Why? Motherly instinct. As we entered the building, I began to breathe more easily. Somehow it felt so right for Preal, despite the distance.I remember the director and social worker receiving us, showing us around the entire center, and then meeting with the physiotherapist.She looked at Preal, and instantly said that she had every confidence Preal would learn how to walk. We were skeptical, even a little angry. It sounded like nothing more than fantasy.Preal began attending school daily, in a class run by a teacher named Nava. Almost from the start we could sense a tremendous, and very welcome, change. Firstly, Preal was treated by an array of quality professionals who would not give up on her, and challenged her endlessly, setting up clear goals.Preal received so much: physiotherapy, hydrotherapy, speech therapy, music therapy, occupational therapy and more. Gradually, and I mean very gradually, we began to see how all that hard work was paying off. Preal began crawling, then standing, and then walking! She learned how to negotiate some parts of her world, despite so many challenges.Several years passed, replete with intensive therapies and treatments, and Preal learned to speak.She discovered her voice and ability to sing. The peak was when she was included in the Keren Or choir.Suddenly, our tiny little Preal was singing, appearing before large audiences, spreading great joy and receiving love from everyone! No words exist to describe her feelings – beaming from ear to ear.Today I see how belief in Preal’s abilities, the way she has been supported and encouraged every step of the way, has completely shaped her. During our own difficult moments Keren Or reinforced our own belief in Preal, which in itself is a huge gift to the family.Preal has gained a slightly calmer mother and father. No less important, Preal’s siblings have received a normatively functioning and healthily happy mother and father too.This year, the staff decided to challenge Preal once more, along with some of her classmates, and have them join the “Community Heat” in Jerusalem’s annual marathon on Friday. We’ll be there cheering them on. Together, we’ll cross the finish line! No one gets left behind! I’m inviting you all to join Preal and her friends, and show them just what social solidarity is! These will be 800 meters of love, determination and courage. Every step these children take is a step towards their progress, and every step is therefore miraculous.

Join the Keren Or team and together, we’ll make our society so much better! To join Keren Or Pupils in the Jerusalem Marathon, contact Assaf Finkelstein at asafink@gmail.com or 052-651-9553.
Advertisement
Subscribe for our daily newsletter