The fruits of normalization among east Jerusalem Arabs. 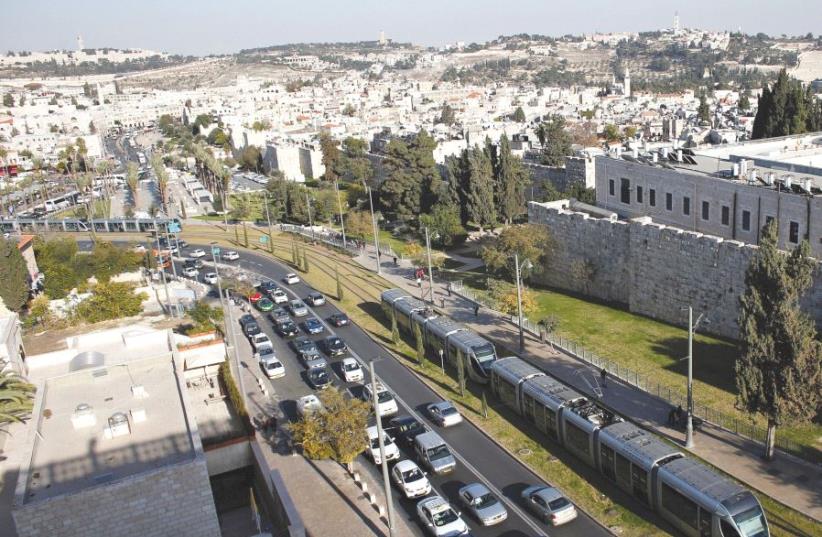 Jerusalem, Israel
(photo credit: REUTERS)
Advertisement
Last week, this column looked at the growing influence of Erdogan’s Turkey and other radical Islamist groups in eastern Jerusalem political and social affairs, as reported recently in the new Hebrew intellectual journal Hashiloach by Dr. David Koren and Ben Avrahami, advisers on eastern Jerusalem affairs for the Municipality of Jerusalem.This week, I wish to present the more optimistic side of the situation, focusing on trends among eastern Jerusalem Arabs toward integration with Israeli society, and on the policies being implemented by Mayor Nir Barkat to increase an Arab sense of belonging to united Jerusalem.To start, one must know the numbers. There are some 320,000 Arab residents in Jerusalem (plus 50,000 residents of Judea and Samaria who reside in the city illegally or by virtue of family reunification). They constitute about 37% of the Jerusalem population and 20% of the Arabs within Israel’s overall borders. About 100,000 of Jerusalem’s Arabs live in chaotic neighborhoods that lie within the municipal boundaries but are on the other side of the security fence.The Arabs of Jerusalem are relatively young and impoverished. According to the National Insurance Institute, 83% of the children in east Jerusalem live below the poverty line, as against 56% of Israeli Arab children and 39% of Israeli Jewish children in western Jerusalem.Residents of eastern Jerusalem have the legal status of permanent residents, which in practice is the same as that of foreign nationals who want to live in Israel for a protracted period. This status grants them the right to live and work in Israel without the need for special permits (unlike Palestinians in Judea and Samaria). It also entitles them to benefits under the National Insurance Law and the National Health Insurance Law. As permanent residents, they are eligible to vote in municipal but not in national elections.Obviously, these social and health benefits rank high among the reasons for which Palestinians prefer to live within the municipal boundaries of Jerusalem, even though they could obtain cheaper and better housing elsewhere.Eastern Jerusalem Arabs “are entangled in a thicket of contradictions,” write Koren and Avrahami. “They assert their Palestinian national identity alongside an unprecedented demand for Israeli citizenship; throw stones at the light rail while using it; harass visitors to Hadassah Hospital on Mount Scopus but value the care that Arabs receive in its clinics and wards; protest the enforcement of planning and building laws in Arab neighborhoods while calling for an increased police presence there to maintain public order; campaign against any manifestation of normalization with Israel in tandem with a tremendous interest in learning Hebrew and an increasing preference for the Israeli rather than the Palestinian matriculation certificate...”Koren and Avrahami believe that more and more residents of eastern Jerusalem understand that there is no alternative to Israeli control of the city on the horizon, and that they will always be better off under Israeli administration. In fact, the last Washington Institute survey in eastern Jerusalem, conducted in June 2015, found that 52% of Arab residents would prefer to become citizens of Israel, whereas only 42% would want to be citizens of the Palestinian state, even after a peace accord.As mentioned, there is a vast increase in the numbers of eastern Jerusalemites filing applications for Israeli citizenship; more than 1,000 in 2016. Other indicators of belonging are the many programs to learn Hebrew that have been established in eastern Jerusalem in recent years; the mounting preference to send children to schools that lead to Israeli high school matriculation; and the soaring demand in eastern Jerusalem for pre-university preparatory programs subsidized by the Israeli government.Arab Jerusalemites also have responded enthusiastically to the municipality’s opening in eastern Jerusalem of employment centers, community councils at the neighborhood level, and a hi-tech incubator.In addition, notice has been taken of the Jerusalem Municipality’s major effort to reduce the disparities and improve the level of services and infrastructure in Arab neighborhoods, with an emphasis on roads (more than NIS 50 million a year) and classrooms (NIS 500m. over the coming decade).“In our eyes,” write the municipality Arab affairs advisers, “even the protest demonstrations by eastern Jerusalemites in Safra Square, in front of city hall, are not nuisances, but rather a welcome phenomenon that expresses a de facto recognition that the municipality is the appropriate address for solving their problems. This is the fruit of normalization.“We believe that, despite their Palestinian national identity, broad sectors of the eastern Jerusalem Arab population have come around to a pragmatic attitude about Israeli authorities. Increasingly, they see Israel not only as a culprit to be blamed for their difficulties but as the only possible source for solving their problems and turning their lives around.“There are many Palestinians in eastern Jerusalem who have reached the instrumental level of exploiting the advantages offered by the western half of the city and would now like to participate in Israeli society at a deeper level – learning from it, mingling with it, and even joining it. An expression of this is the growing number of eastern Jerusalem teenagers who are doing civil service after high school.”Koren and Avrahami argue that Israel must invest in these propitious trends, for they have strategic implications both for the unity of the city and for its security situation. “In another decade or two, the teenagers who today engage more deeply with Israeli society will be the pragmatists who moderate Palestinian society.”During recent rounds of violence, they note, teachers and principals went out into the streets to get their pupils to curb their emotions and avoid attacking innocent persons, both Arabs and Jews. “In another decade, perhaps these teachers will be joined by businesspeople, community activists and cultural figures who endeavor to introduce mutual respect and sensitivity to the turbulent reality of Jerusalem.”www.davidmweinberg.com