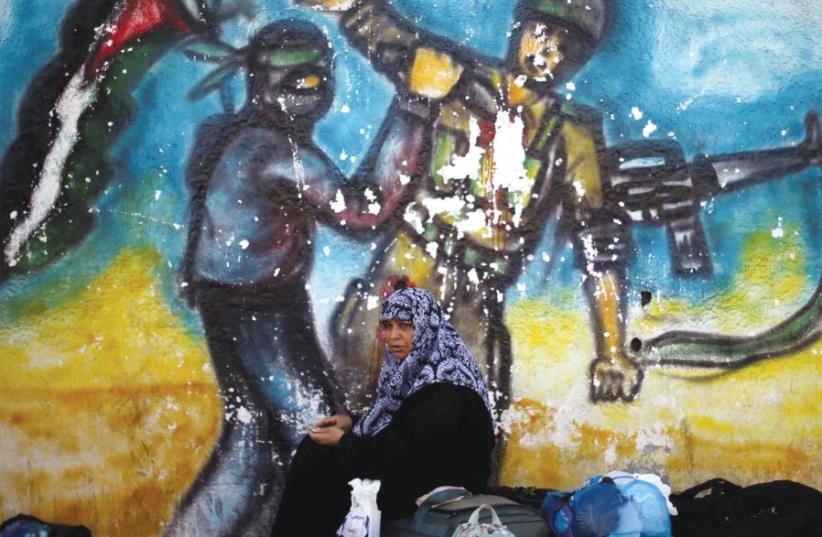 A WOMAN sits in front of a mural as she waits for a travel permit to cross into Egypt through the Rafah Crossing last year
(photo credit: REUTERS)
Advertisement
Two Gazan women were caught on Wednesday smuggling explosives from Gaza into Israel for Hamas. The sisters hid the weapons in medical supplies they had been given in Israel, after one had been treated here for cancer.Last month, Deputy Defense Minister Eli Ben-Dahan revealed that Hamas was using Gazan cancer victims as mules to smuggle money and gold into Israel to finance terrorist operations.Everyone remembers Wafa Samir Ibrahim al-Biss, the 21-year-old Palestinian woman from Gaza who in 2005 was caught wearing 10 kilo of explosives in her underwear, en route to blowup Soroka-University Medical Center in Beersheba where she was being treated for burns.She admitted to being recruited by Fatah’s Aksa Martyrs Brigade, and added that she had wanted to kill as many Israeli children in the hospital as possible.Despite the security risk, Israel annually allows tens of thousands of Palestinians to leave the Gaza Strip for medical treatment in Israel (and in the West Bank and Jordan).I know this firsthand. For a decade I served as a public affairs and development officer at Sheba Medical Center at Tel Hashomer, the largest hospital in the Middle East. At any given time, one-quarter of all patients in that institution’s Edmond and Lily Safra Children’s Hospital are Arabs from Gaza.Treating these children from enemy Hamastan is a complex humanitarian commitment that stems from compassion that is ingrained in Jewish history and tradition.The doctors and administrators at Sheba (and other Israeli hospitals that offer similar care to Palestinians from the West Bank, to Syrian refugees, and quietly, to Arabs from across the Mideast) are proud of their efforts.But it hurts when wicked forces exploit this professionalism and goodwill for nefarious purposes; when they abuse our humanitarian generosity to commit terrorism.I was eyewitness to the following sordid tale.Several years ago, there was an eight-year-old Palestinian boy ill with a rare form of cancer. He was clearly going to die without a bone marrow transplant, and was brought to Sheba.Sheba worked hard to obtain permission to enter Gaza and test the child’s relatives, until doctors found an 18-year-old brother who was an almost perfect bone marrow match. The problem was that Israeli authorities didn’t want to grant this brother entry to Israel for the operation, because he was a hard-core Hamas activist with ties to known terrorist operatives.Nevertheless, a number of doctors at the hospital successfully petitioned the Defense Ministry to grant special dispensation and allow the older brother into Israel, in order to save his little brother’s life.The older brother arrived late Friday afternoon.The doctors began the delicate procedure.Within a 24-hour window, the plan was to suppress the patient’s immune system, harvest the bone marrow from the donor brother, and carry out the transplant.But Friday night at midnight, when it was time for the donor brother to do his part, he was gone.Disappeared! The doctors went crazy. One nurse said: I saw two Shin Bet agents come and take him away. This was a death sentence for the sick eight-year-old Palestinian child.What do you do in the middle of the night? The hospital director called the Prime Minister’s Office (which oversees the security services).Where is my bone-marrow donor, he demanded to know! Within two hours, a very senior security official was on the line admitting that, yes, the Shin Bet took him away. You see, the Shin Bet had been taking precautions. It had been eavesdropping on the 18-year-old’s cellphone conversations.And from within the Israeli hospital to which he had been specially brought in order to save the life of his younger brother, this youthful Palestinian terrorist had been giving instructions on the phone to his Hamas handlers in Gaza on how to get past security at Sheba Medical Center and blow the place up.(The end of the story is that, despite this outrage, the director of the hospital asked that the young terrorist be returned to the hospital for a few hours in order to save the life of the eightyear- old. The Shin Bet brought him back at 4 a.m. in leg irons to donate bone marrow, and the doctors indeed managed to save his baby brother’s life. Then the 18-year-old terrorist was whisked away again.) Needless to say, this story makes the blood boil. It stings to be taken advantage of by radical Palestinians; to act with humanity and compassion, while our enemies act with inhumanity and cruelty.The story exacerbates our sense of isolation and demonization, when in fact, the demons are those would blow up an Israeli hospital that is going out of its way to treat Palestinians, and even Hamas family members. The story breeds Israeli indignation, rightfully and righteously so.It also adds to our chagrin about being unappreciated by the world. Let’s say I had told this story to a senior foreign journalist (something that wasn’t possible at the time) like The New York Times correspondent in Israel. Do you think the paper would have run the story? Do you think the paper would have made such a story – sympathetic to Israel and severely unflattering to Palestinians – a front-page feature? Unlikely. I can tell you from years as a professional spokesman for Israeli medical, academic, defense and diplomatic institutions just how difficult it is to get a story placed that doesn’t fit the conventional, politically correct line about Israel being the victimizer and the Palestinians the victims.A direct line runs between this bias and the suave op-ed article by Palestinian “leader and parliamentarian” Marwan Barghouti published in the Times this week.That paper never would have run an op-ed by convicted Taliban or al-Qaida terrorist sitting in Guantanamo Bay, and certainly not without correctly labeling him as a convicted mass murderer.So why didn’t the Times brand Barghouti in this way? Because doing so would be unflattering to the Palestinian national movement, and by inference too sympathetic to Israel.www.davidmweinberg.com