Salaries for the Peshmerga is not the only vital area where funds have gone dry. 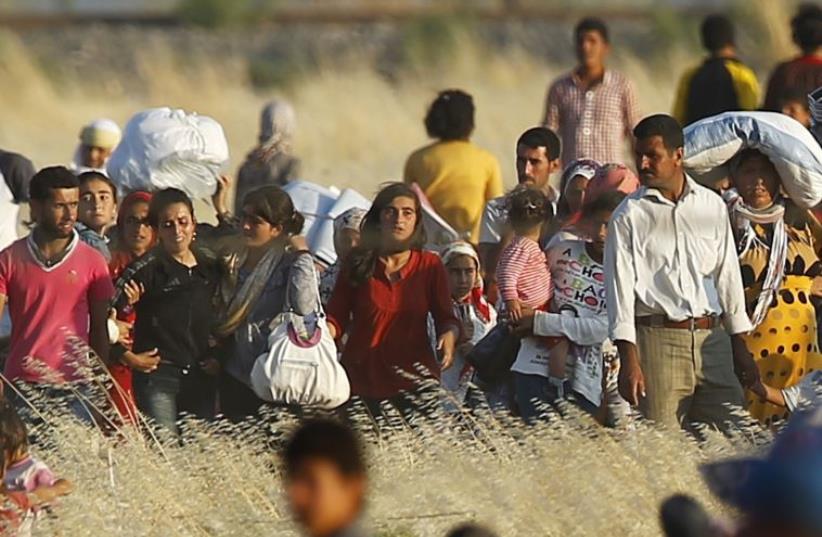 Syrian Kurds from Kobani walk to the border fences as seen from the Turkish border town of Suruc
(photo credit: REUTERS)
Advertisement
The Kurdistan Regional Government (KRG) is at a precipice of developing their own state while simultaneously facing an intensive economic crisis which could not only delay statehood but deteriorate the region to the point where statehood may become impossible. Arguably the most prominent challenges of the ongoing economic crisis are accommodating the refugees fleeing Islamic State (ISIS) and funds being withheld in Baghdad. As of early 2014, around the same time the majority of the Internationally Displaced Persons (IDPs) headed to the region, the federal government in Baghdad stopped paying KRG’s 17 percent budget share.Until recently, Iraqi Kurdistan was considered to be a faint beacon of hope for those trying to escape ISIS, yet with the influx of refugees (approximately two million) and the deteriorating economy, this developing state could be susceptible to conditions that would enable ISIS to take over it as well.In Sulaimani, Peshmerga forces have been holding demonstrations calling on the KRG to pay salaries, which have continued to be delayed. According to a report by German public broadcaster NDR in January, several G3 assault rifles and a P1 pistol from the German military were found in Sulaymaniyah and Erbil markets. The weapons, which sell for between $1,450 and $1,800, were sold by Peshmerga members in response to the KRG’s inability to pay salaries.Salaries for the Peshmerga is not the only vital area where funds have gone dry. Schools across the region have been closing down, including private international schools. Teachers are being let go and the subjects they teach along with them. Some schools have cut art and social studies from the curriculum.“They let us go with no notice.... On Sunday morning they said this is your last day here at the school. We can’t pay you anymore” said Wael Yousef, a former teacher from the downsized Zakho International School in Erbil.Across Iraqi Kurdistan, the economic crisis has led to thousands of development projects being shut down, such as one of Kurdistan’s major new power plants after an attack on January 6. Insufficient funding for supplies is only one of the consequences of this economic downturn. Government workers have gone unpaid for months now.According to a recent World Bank report, economic growth contracted five percent in Iraqi Kurdistan, and the poverty rate more than doubled from 3.5% to 8.1%. Costs for stabilization from 2015 are estimated at $1.4 billion in additional spending – far more than the KRG budget. The KRG’s share of the federal budget is currently at 17%, minus sovereign expenses. This corresponds to about $12b. a year, or 80% of KRG’s total revenue, which continues to be withheld primarily due to the political gridlock in Baghdad, inevitably paralyzing the public sector and keeping an investment budget on hold since February 2014.The World Bank report also notes that the KRG’s budget deficits currently average about 1% to 2% of estimated GDP, and have mostly been financed through domestic borrowing, though a small percentage of the operations of the Ministry of Natural Resources involve quasi-fiscal activities.In response to the refugee crisis, the Ministry of Natural Resources estimates that approximately $1b. was spent providing the IDPs with basic support.The ministry estimates that about $5b. was injected into the economy, corresponding to 41% of the budgetary resources that were not transferred by the central government. The ministry claims it was this financial support which allowed the economy to avoid a total collapse.These economic misfortunes could not come at a worse time because despite these challenges, other efforts have been made by the KRG to make Kurdistan more state-ready. As of 2012, according to the United Nations Assistance Mission for Iraq (UNAMI) Human Rights Office, the KRG “established an inter-ministerial committee to oversee implementation of the regional action plan on human rights, aimed at formulating a program of legal, institutional and policy reforms to address gaps in the protection of human rights identified as a priority.”Yet despite such efforts to improve Iraqi Kurdistan’s readiness for statehood, their significance is marginalized by the economic crisis.However, despite Iraqi Kurdistan’s deterioration in the public sector, there has been a small improvement in its private sector. Iraqi Kurdistan’s private sector has always been considerably under-developed.The World Bank has recognized the improvements, but the improvements have come from a low point. The number of registered firms, which are largely based around Erbil and Sulaymaniyah, “has grown from 7,440 in 2008 to 13,216 in 2011 and to 20,994 in July 2014” and most of these firms are local, according to the World Bank. Although there is some improvement, it is only internally driven. Of 20,994 registered firms, only 2,822 are foreign firms, demonstrating marginal foreign investment in the private sector.In response to the ongoing economic debacles, the US is requesting data on the KRG’s expenditures to assess further assistance. Although the US State Department has no doubt that assistance to the KRG will continue, it still struggles to properly estimate the deficit. KRG Prime Minister Nechervan Barzani last month asked for technical assistance from the US for plans to implement reform aimed at reducing expenditures and increasing revenue. The details of this reform have yet to be published but time is of the essence.For years now, many foreign policy specialists have anticipated the emergence of a Kurdish state in northern Iraq, which it is believed will serve as a source of stability in the Middle East. Many believe that time is soon. However, despite growing international support and recognition increasing Kurdistan’s momentum, economic destitution from fighting ISIS and dealing with the ongoing refugee crisis is diminishing any potential for the future state to be independent of foreign aid once it is established, ultimately defeating this unprecedented opportunity. Glenn Field is a writer and teacher working in Erbil, Iraqi-Kurdistan. Glenn has a Bachelors in Psychology and a Masters in Conflict Resolution and Mediation which he received from Tel-Aviv University.