Lag Ba’omer: From Bibi to Bogie to Boujie

As former IDF chief of staff Ya’alon knows full well that at the start of basic training in the IDF new recruits are taught how to address their commanding officers. 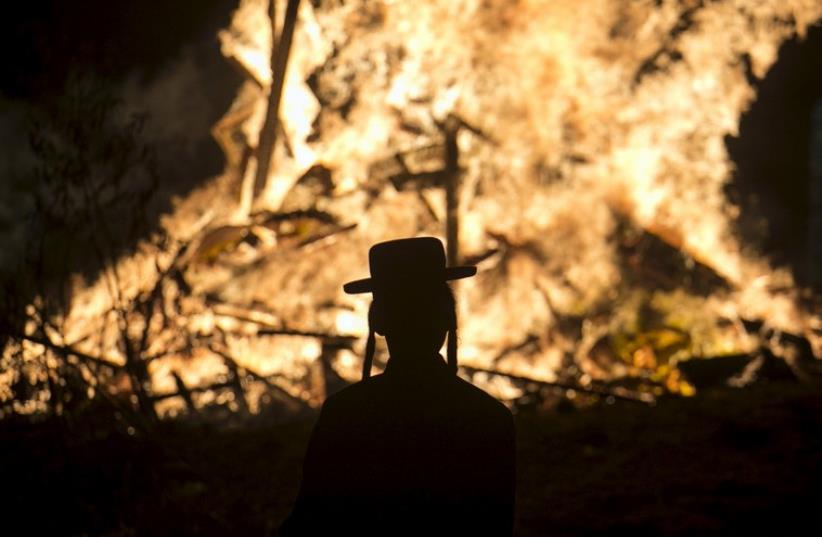 A bonfire during Lag Ba'omer festivities in Bnei Brak
(photo credit: REUTERS)
Advertisement
It’s that time of year again. Kids with “borrowed” shopping carts full of wood rush by. The smell of bonfire smoke fills the air. Lag Ba’omer is here in Israel.While I have grown accustomed to the bonfires (and the smoke) which will accompany the onset of Lag Ba’omer this Wednesday night, I wonder if all the revelers know that the fires are in honor of the great sage and author of the Zohar, Rabbi Shimon Bar Yochai, a disciple of Rabbi Akiva who according to tradition passed away on Lag Ba’omer.What puzzles me is the main reason behind the celebrations on Lag Ba’omer. According to the Talmud, during the time of Rabbi Akiva 24,000 of his students died of a divine plague during the counting of the Omer. The Talmud goes on to say that this was because they did not show proper respect to one another, befitting their level.They begrudged each other their spiritual attainments.Jews celebrate Lag Ba’omer, the 33rd day of the count, as the traditional day that this plague ended.But how could these great scholars in their own right, the students of Rabbi Akiva, the same Rabbi Akiva who preached “love your neighbor as yourself” (Leviticus 19:18) and proclaimed, “this is an essential principle of the Torah,” have fallen in observance of this vital precept? How could they, of all people, have lacked respect for their scholarly colleagues? A possible answer occurred to me as I scanned the recent Israeli headlines. Instead of the full names of Prime Minister Benjamin Netanyahu, recently deposed defense minister Moshe Ya’alon and Zionist Union leader Isaac Herzog, we are treated to references to “Bibi,” “Bogie” and “Bougie” (their respective nicknames).As former IDF chief of staff Ya’alon knows full well that at the start of basic training in the IDF new recruits are taught how to address their commanding officers.In Hebrew the term governing this and other aspects of army life is “merchak pikudi,” “command distance,” more commonly known by an English word, heavily accented by Israelis: “distance.”Maintaining distance is important in the Israeli army as most of the commanding officers are only slightly older, a year or two, than those they are commanding. When I was inducted as a new immigrant into the IDF, I was older than both recruits and officers by several years, but still respected the distance the officers enforced. Only on the last evening of basic training did the officers “break distance” and ease restrictions, allowing soldiers to call them by their first names and speak to them in an informal manner.It seems to me that what Israeli society lacks today is distance.Most of us who grew up in the Diaspora addressed our teachers by their last names (Mr. Jones or Mrs. Smith).Nobody would dream of calling a teacher by their first name as many students in Israel today do. The same goes for other people in authority. Rabbis, teachers, doctors, professors, authority figures and older people in general were always addressed with respect, as “sir” or “ma’am” or simply by their title. There was none of the familiarity that is so prevalent today. Perhaps that’s why distance must be hammered home so hard in the IDF. Many of the Israeli-born recruits are simply ill-prepared to address those in authority in a respectful way.The same is true at home. I have seen many cases where there is little or no distance between parent and child. In some cases the parent is at fault for turning the child into a friend. This never happened with my late father. Whenever I would get too silly or disrespectful around him he would sharply remind me, “I am not your friend!” and I would quickly adjust my behavior. It’s a good lesson for young people today.So perhaps this was the trap that the students of Rabbi Akiva fell into. Perhaps they became too chummy with their fellow pupils. Perhaps in their study of Torah they became too close to one another and did not leave any distance, which caused them to lose respect for one another.If one takes the analogy of a fire, which is quite appropriate for Lag Ba’omer, fire can be wonderful, it provides heat, light, warmth, etc. – but if you get too close, you get burned. Perhaps the same thing happened to the students of Rabbi Akiva; they became too friendly with one another and lost the respect they should have maintained for their colleagues – they did not keep a respectful distance.Nicknames are fun and playful and are often used as a term of endearment. However, they can also be a tool for ridicule (as recent headlines have shown). When referring to our nation’s leaders, proper names should be used, not nicknames.Using their proper names may not change their politics, but it may cause us to be more respectful of them – and hopefully of one another too.

The writer is a contributing editor at NoCamels.com.
Advertisement
Subscribe for our daily newsletter