The time has come for the new democracies of Eastern Europe to start facing the historical truth. 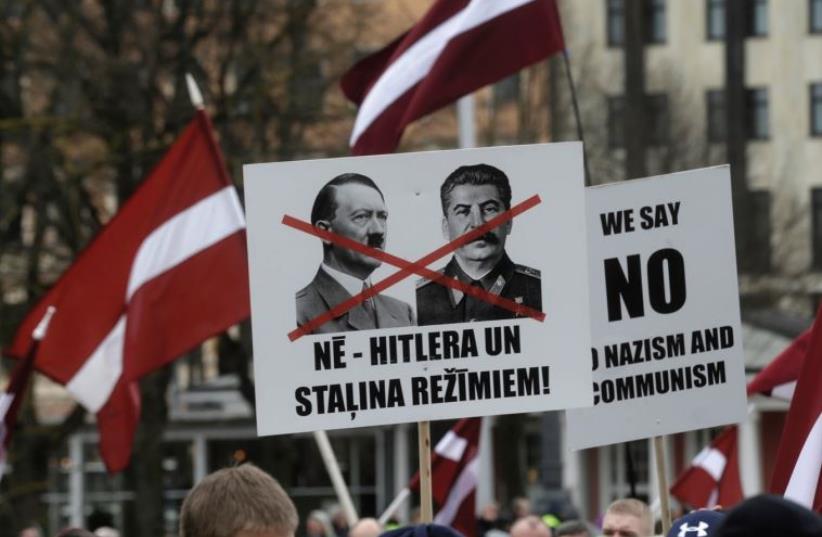 PLACARDS AT the annual procession commemorating the Latvian Waffen-SS unit, also known as the Legionnaires, in Riga on March 16.
(photo credit: REUTERS)
Advertisement
Latvia must come to terms with its past • By EFRAIM ZUROFF Last Wednesday, I was in Riga to monitor and protest against a march by Latvian SS veterans and their supporters through the center of the Latvian capital, to mark the date (March 16) that both Latvian Waffen-SS units fought side by side with Nazi troops against the Soviet Red Army. This is an annual event, which seeks to honor these soldiers who are portrayed by their supporters and sympathizers as “freedom fighters” who fought to achieve Latvian independence, and whose sacrifices on the battlefield against the Soviets in World War II helped pave the way for Latvia to regain its sovereignty. (The country has been independent during the years 1918-1940, was occupied by the Soviets in June 1940 and a year later invaded by the Nazis. In 1944, the Soviets ended the Nazi occupation and Latvia was incorporated into the Soviet Union until the breakup of the latter in 1991.) This theme was expressed in the route of the march from one of Riga’s largest churches to the Freedom Monument, which throughout the Soviet occupations was the symbol of Latvian aspirations for independence, and the ceremonial honor guard of young Latvians with flags of today’s democratic Latvia awaiting their arrival to lay wreaths at the monument.The problem is, however, that nothing could be farther from the truth.The Latvians’ desire to fight against the Soviets and prevent a second Communist occupation was understandable, but their choice of partners was morally and practically deeply flawed. By joining the Latvian Legion, which was part of the Waffen-SS, their service was spent fighting for a victory of the most genocidal regime in human history, and even worse was totally for naught.The Nazis, in fact, had absolutely no intention of granting Latvia, or any of the Baltic countries, independence.Thus ironically, it is only because Germany was defeated in World War II, that Latvian sovereignty could ultimately be restored. Thus two of our arguments against the march are that those who fought together with the Nazis should not be regarded as national heroes, nor can they be considered freedom fighters, since there was no basis whatsoever to assume that serving in military units which fought under the Nazis’ command would bring about Latvian independence.Even worse is the fact that quite a few of the Latvians who joined the Legion had previously served in the local security police units, which played a major role in the mass murder not only of their Jewish fellow Latvian citizens, but also of many thousands of Jews from Germany and Austria who were deported to Riga by the Nazis to be murdered there. In addition, some of the men who served in the notorious Arajs Kommando death squad were sent to Minsk to assist in the annihilation of the 100,000 Jews incarcerated in the local ghetto. Needless to say, such crimes should automatically disqualify such persons from any honors or recognition.There were only seven veterans who marched to the Freedom Monument, others are no doubt alive, but unable to attend for reasons of health and/or logistics. There were, however, about 1,000 people who came out to honor the Legionnaires, and additional tens of thousands who no doubt identify with them all over Latvia, Lithuania and Estonia, as well as throughout post-Communist Eastern Europe. They reject the accepted narrative of World War II and the Holocaust, and have yet to even begin to seriously confront the role of their own nationals in the annihilation of their Jewish communities.The current threat posed by Russia’s belligerent foreign policy and Moscow’s highly exaggerated accusations that the Baltic states are reverting to fascism only reinforce their fear of another Russian occupation and strengthen their resolve to focus on their own victimhood at Soviet hands.So much so in fact that the Latvian authorities foolishly barred the entry of several German protesters who sought to demonstrate peacefully against the march, and even arrested five of them.In addition, those who were able to arrive at the demonstration were consigned to a spot some 200 meters away from the march, where they could not be seen by the marchers.The time has come for the new democracies of Eastern Europe to start facing the historical truth, and for the European Union to finally make clear that hiding Holocaust crimes by locals and falsely equating Communism with Nazism are not acceptable.As hard as this might be at this point for Eastern Europeans to accept, such developments are likely to have a much more constructive effect on their societies, than the acceptance in the West of the false narrative that they have been trying to peddle for the last quarter of a century.

The author is the chief Nazi-hunter of the Simon Wiesenthal Center and director of its Israel office and Eastern European affairs. His most recent book, written together with Ruta Vanagaite, is Musiskiai; Kelione Su Priesu (Our People; Journey With an Enemy), a study of Lithuanian complicity in Holocaust crimes and how the Lithuanian authorities are trying to conceal the extremely important role of local collaborators. It was published in Lithuanian two months ago by Alma Littera.
Advertisement
Subscribe for our daily newsletter